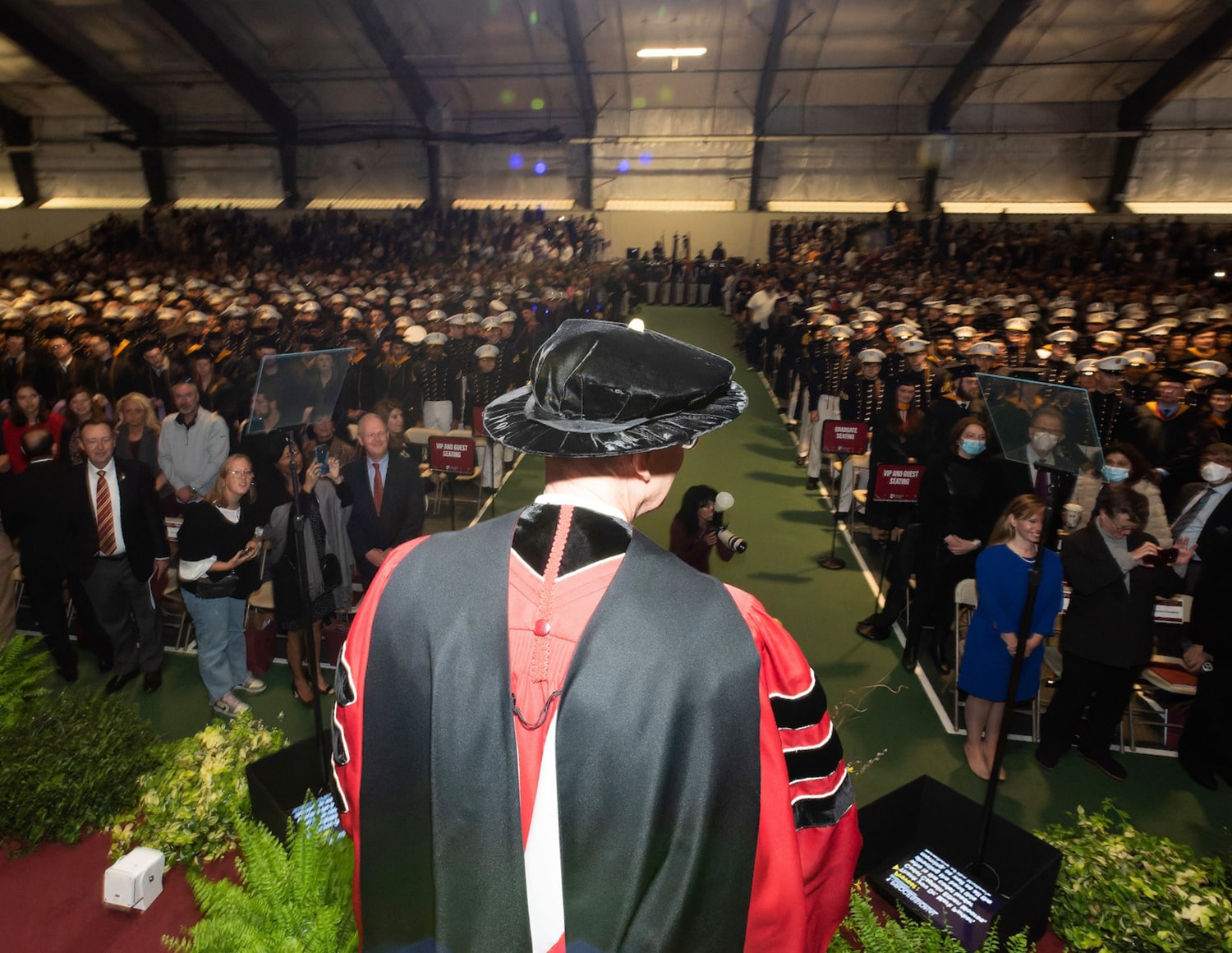 NORTHFIELD, Vt. — Norwich University celebrated commencement and commissioning with April 30 ceremonies in Shapiro Field House in which 531 students graduated from 32 undergraduate programs and one master’s program and 134 graduates commissioned into the U.S. armed services.

U.S. Army Capt. Deshauna Barber, the first-ever soldier to be crowned Miss USA, delivered the university’s 2022 commencement address to graduating seniors. The 31-year-old spent her yearlong 2016 Miss USA reign advocating for additional government support for military personnel suffering from post-traumatic stress disorder (PTSD). She uses her platform to encourage higher attention to the mental health of service members who have deployed and served.

Graduates include future military officers, law enforcement officers, engineers, nurses and many who will go on to graduate school, jobs in the federal government, athletic training, construction management, cybersecurity and numerous public-service sectors.

Barber served her country for more than 10 years and now works as an instructor at Howard University's Bison Battalion during her Army Reserve commitment. She has made it her life’s goal to encourage, inspire and strengthen the people around her.

In her address, Barber shared with the Class of 2022 “The Four Lessons to Glory after Graduation.” She spoke of the process toward success, which can be arduous, in lesson one: “Don’t sleep on your stepping stone.” She then shared about her path to becoming Miss USA, and losing her mother to cancer just a few months into her reign in lesson two: “Our accomplishments do not exempt us from hardship.”

“It means that in the midst of celebration, we can also be experiencing grief and heartache,” Barber said. “It means that you never know what someone is going through and to never judge a book by its cover. Everyone is experiencing something no matter how amazing their life may seem.”

“Each of you owe the generations before you that paved the way for you to be here graduating from this amazing university to chase every dream you have,” Barber said. She concluded: “Norwich University graduates, you are limitless if only you allow yourself to be. The world is ready for you, congratulations, and good luck!”

Graduates include future military officers, law enforcement officers, engineers, nurses and many who will go on to graduate school, jobs in the federal government, athletic training, construction management, cybersecurity and numerous public-service sectors. The Class of 2022 consisted of 233 civilian students, 291 Corps of Cadets students and seven others along with 28 graduates hailing from 12 countries on five continents.

U.S. Army MG Douglas Stitt NU ’90, delivered the keynote address to commissionees. MG Stitt, who has served in assignments in the United States and overseas, now serves as director, military personnel management for Headquarters Department of the Army.

During the joint commissioning ceremony, MG Stitt told the newly commissioning officers, among many other pieces of advice: “You’re going to be called upon to solve problems as part of a team…Think about how do you want to build your team. Treat people with dignity and respect. You learn that here as a cadet at Norwich, that truism will carry you forward with all walks of life and in every branch of service and in the civilian sector.

“The soldiers, sailors, airmen and marines, guardians of the coast guards who are entrusted in your care will not follow you unless they know and understand that they are serving alongside an empathetic and caring leader,” he added.

About Norwich University
Norwich University is a diversified academic institution that educates traditional-age students and adults in a Corps of Cadets and as civilians. Norwich offers a broad selection of traditional and distance-learning programs culminating in baccalaureate and graduate degrees. Norwich University was founded in 1819 by U.S. Army Capt. Alden Partridge and is the United States’ oldest private military college. Norwich is one of our nation's six Senior Military Colleges and the birthplace of the Reserve Officers’ Training Corps (ROTC). www.norwich.edu