At change of command ceremony, nods to past, eyes on future 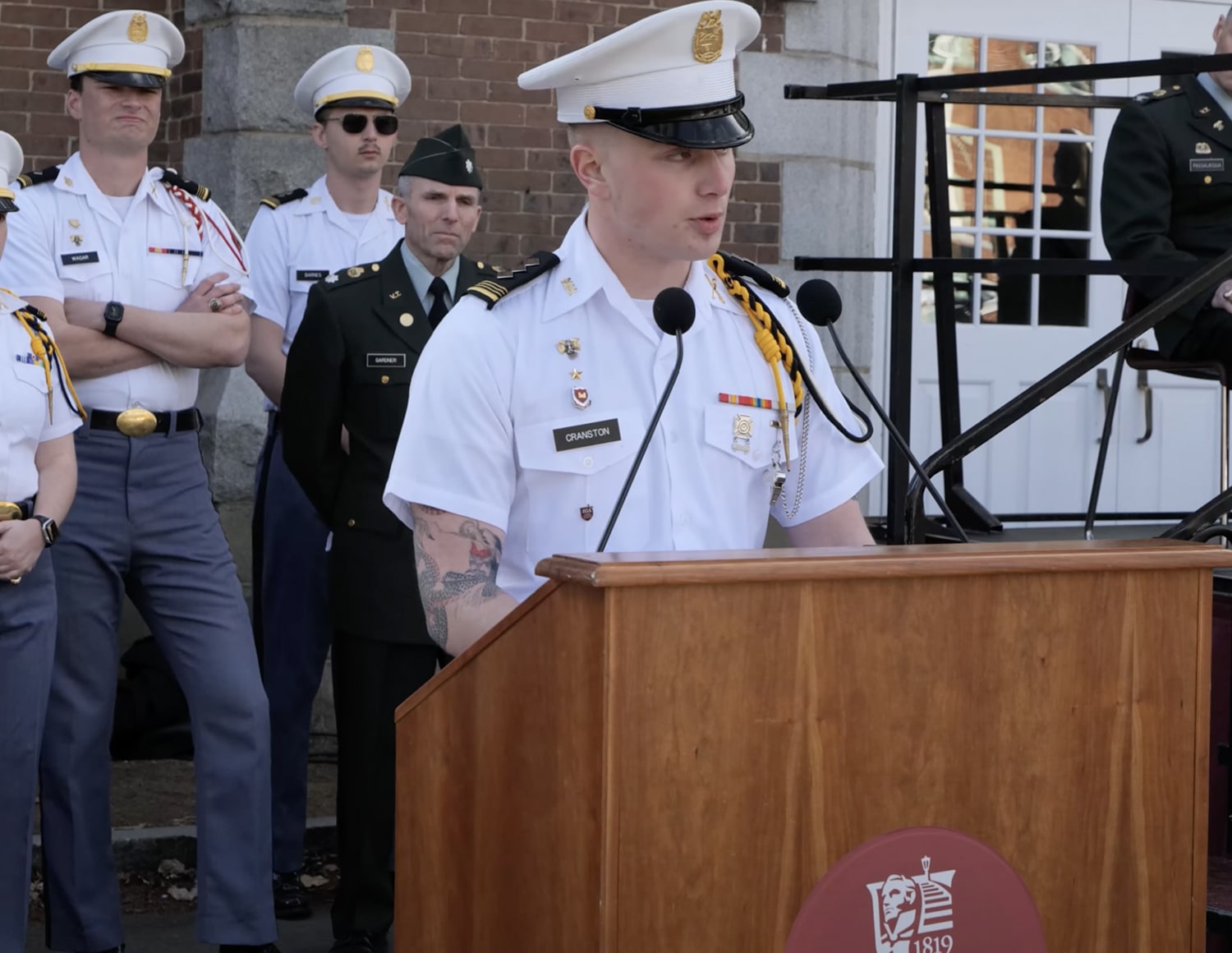 Milestones pack any spring semester’s final weeks, forming a celebratory trail to Commencement and Commissioning’s grand finale. The hurdle of exams and capstone presentations gives way to social gatherings, awards ceremonies and the Corps of Cadets’ annual changing of command.

“I interviewed for this job with the hope of attempting to give back to the institution that built me, and, in some capacity, I pray that I have done that.” Matthew Cutting, 2021-22 regimental commander, Norwich University Corps of Cadets

The ceremony also saluted retiring faculty and Martha Rainville, a retired U.S. Air Force major general who’s retiring from the Board of Trustees. Rainville, who holds honorary doctorates from Norwich University and St. Michael’s College, became the first woman in U.S. history to become a state adjutant general when she served in that post with the Vermont National Guard.

Cutting, who will commission into the U.S. Army after he graduates Saturday, thanked ROTC and Commandant’s Office staff and his parents, who were in the audience. He said leading Norwich’s Corps had been an honor, privilege and challenge.

“I interviewed for this job with the hope of attempting to give back to the institution that built me, and, in some capacity, I pray that I have done that,” he said.

He encouraged freshman and sophomore cadets to forge their own legacies without fearing failure. He repeated his August message to incoming rooks: people who never fail, never learn.

He asked the juniors to steward Norwich’s traditions and lead honorably in their final year, mentoring the classes behind them. Then, contemplating graduation, Cutting urged his fellow Class of 2022 cadets to forge on with loyal, humble hearts and to look past their uniforms, campus and academics to find the future.

“Look beyond all of it and I promise you’ll soon be able to see the power, hope and purpose that is truly present in the spirit of Norwich University,” he said. “To be family does not always mean through blood. And here, on this plot of land in the middle of Vermont, through shared suffering we have found eternal family.”

A word from Thucydides

Cranston nodded to his parents and to his brother, who will soon deploy with the U.S. Army’s Fort Drum, New York-based 10th Mountain Division. He reversed Cutting’s order of honor, first thanking current seniors for creating a tough act to follow.

Turning to the other classes, Cranston quoted Thucydides, the ancient Athenian historian and general, who said, “A nation that makes a great distinction between its scholars and its warriors will have its laws made by cowards and its wars fought by fools.”

Cranston said, “Our founder, Alden Partridge, dedicated his life to preventing our country from becoming a society (Thucydides) warned us about. It is our collective duty as proud Norwich cadets to carry on this intent.”

Cranston issued his own challenge, asking fellow cadets to serve university before self and to apply their skills and talents to keep the Corps vibrant and powerful.

“You don’t have to be an officer, or cadre or a (noncommissioned officer) to bring something to the table; every cadet here has something to offer to the people standing to the left and right,” he said. “The world around us is constantly changing; a 21st century with new technology, weapons and competition makes our role as citizen-soldiers more important now than ever. … I have steadfast and unrelenting conviction that what we do here every day on the Hill is important and what we do matters.”