Past Event: “Voices from Infamy” 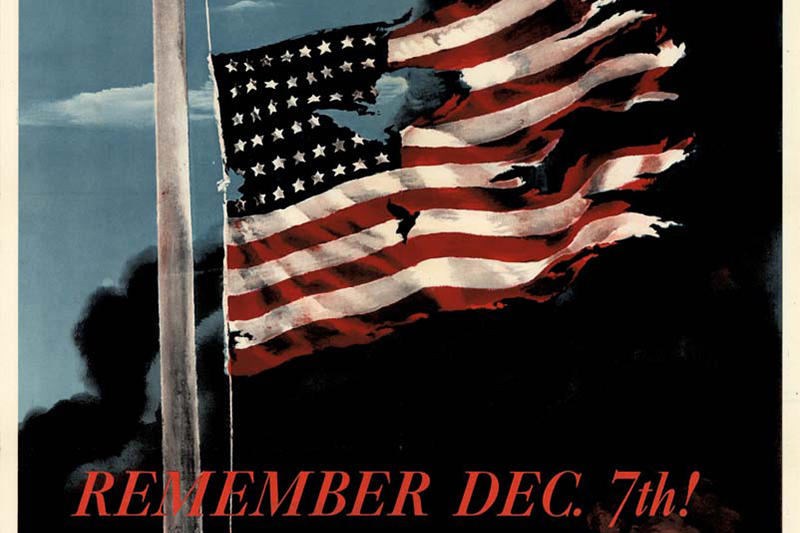 Free and open to the public, this “Lunch and Learn” event will begin at noon in the museum and includes a light lunch.

Cates, who holds a Master of Arts in Military History from the University of Southern Mississippi, will examine oral histories obtained from the National World War II Museum and the Ohio Historical Society of eyewitnesses to the events, play highlights from these accounts as well as show images from the attack and its aftermath.

This event is held in concert with the Sullivan Museum’s exhibit, “World War: America and the Creation of a Superpower,” which examines the way World War I and World War II have defined the place the United States holds in the world. The program is sponsored by the Sullivan Museum and History Center Associates.

The exhibit has been extended until June 23, 2016, due to the overwhelmingly positive response it has received. Featured in the exhibit are propaganda posters on loan from the Robert Hull Fleming Museum in Burlington, and the Pritzker Military Museum in Chicago as well as the Sullivan Museum’s own collection. These posters offer a fascinating look into how war objectives were communicated to the country. Other objects on display include trench art, uniforms, medals and a signature quilt made in Calais, Vermont, during World War I, on loan from the Calais Historical Society, that features a signature by President Woodrow Wilson.

On the following day, Thursday, Dec. 8, the museum will host the final book discussion in “The Path to War” series. This free discussion, open to the public, is co-sponsored by the Vermont Humanities Council. The book featured in December is Doris Kearns Goodwin’s popular book “No Ordinary Time: Franklin and Eleanor Roosevelt: The Home Front in World War II.” Kirkus Review called the book: “a moving drama of patchwork intimacy in the White House, played out against the sweeping tableau of the nation rallying behind a great crusade.”

The discussion will be moderated by Mark Stoler, professor emeritus of history at University of Vermont. He specializes in U.S. diplomatic and military history and is the author of numerous books and articles. The book can be borrowed, free of charge, from the museum. The discussion will be held in the museum conference room at 7 p.m., and light refreshments will be served.

For more information about the programs or exhibit, please call 802-485-2183 or visit academics.norwich.edu/museum.

The Sullivan Museum and History Center is located on the Northfield campus of Norwich University. It is open Monday-Friday, 8 a.m. to 4 p.m., Saturday 11 a.m. to 4 p.m. during the academic year. There is no charge for admission to the museum.