‘I’m proud of you right now, I’m more proud of the people you will become.’ 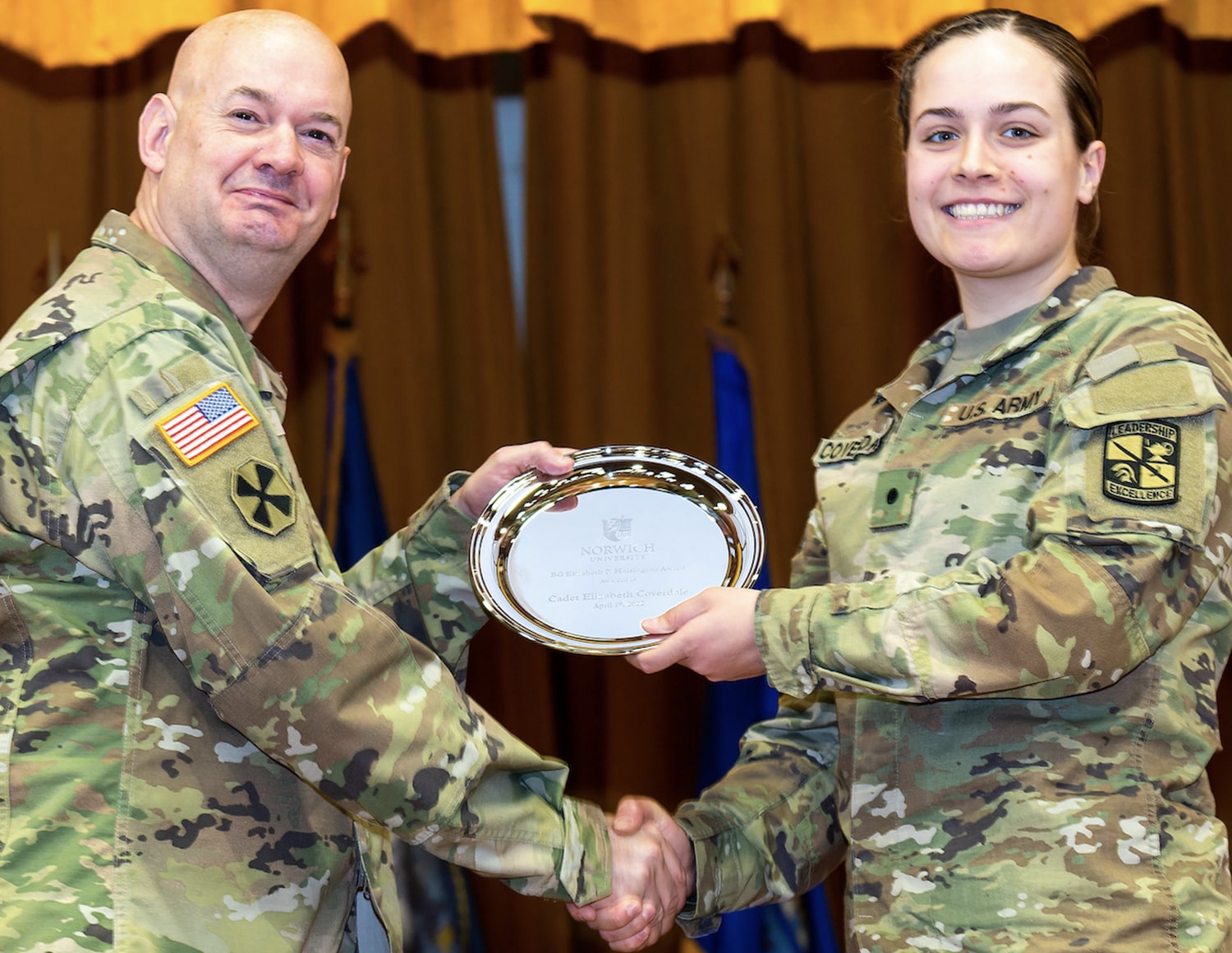 I f service before self is one bedrock tenet of Norwich University’s philosophy, driving toward excellence is another. At last week’s Tri-Service Awards, President Mark Anarumo hailed students’ hard work, service and academic achievement and encouraged students to keep striving and leading.

Ninety-four awards went to Norwich students at the ceremony, which was back indoors at Plumley Armory after one virtual (2020) and one outdoor version (2021) during the coronavirus pandemic’s peak.

Anarumo, joined onstage by ROTC leaders, Interim Commandant William Passalacqua and the Rev. William Wick, and told the audience members they’ll follow in the footsteps of alumni who served in major world conflicts — in Iwo Jima and Fallujah, on D-Day and during the War on Terror —  and built a two-centuries-plus legacy of excellence.

“You, now, as you graduate and commission, are being written into our history,” Anarumo said. “That history is a legacy of service to our nation, not just members of our armed forces, but also as citizens.”

Anarumo encouraged the students to enjoy their service and do great things. He added that someday, when they shed their uniforms and leave military life, they’ll need to keep excelling. Anarumo said he’s discovered this firsthand. After a 30-year service, begun when he enlisted in the U.S. Army at age 16 and ended after years as a U.S. Air Force office, he left national service. He did so to become Norwich’s president.

“I want you to take a moment, and over the next few weeks to reflect with pride on what you have accomplished already,” Anarumo said. “But don’t be satisfied. I’m proud of you right now, I’m more proud of the people you will become.”

A call to engage

Anarumo said history shows Americans must keep engaging civically for self-government to last and thrive. This engagement, he said, will require ethics, purpose and grace, especially with the country politically riven.

“We have to lead, I have to lead, all of you have to learn to lead, if you can’t already, with that compassion and that connection that brings people together instead of drive us all apart,” he said.

Leading effectively requires understanding nuance, Anarumo suggested, knowing when to put a boot on people and when to put an arm around them. These decisions change day to day, conversation to conversation.

Leading effectively also requires the moxie to heal not just the nation, but the world, Anarumo said, especially as the war in Ukraine continues and other conflicts simmer.

POSTSCRIPT: During the ceremony, Anarumo hailed the Regimental Band, which accompanied the inbound procession and has led itself since winter break. (The former director left the university in December.) The band self-organized and self-staged its spring concert, which ran earlier this month in White Memorial Chapel. Anarumo said the university has hired and will introduce a new bandleader soon.