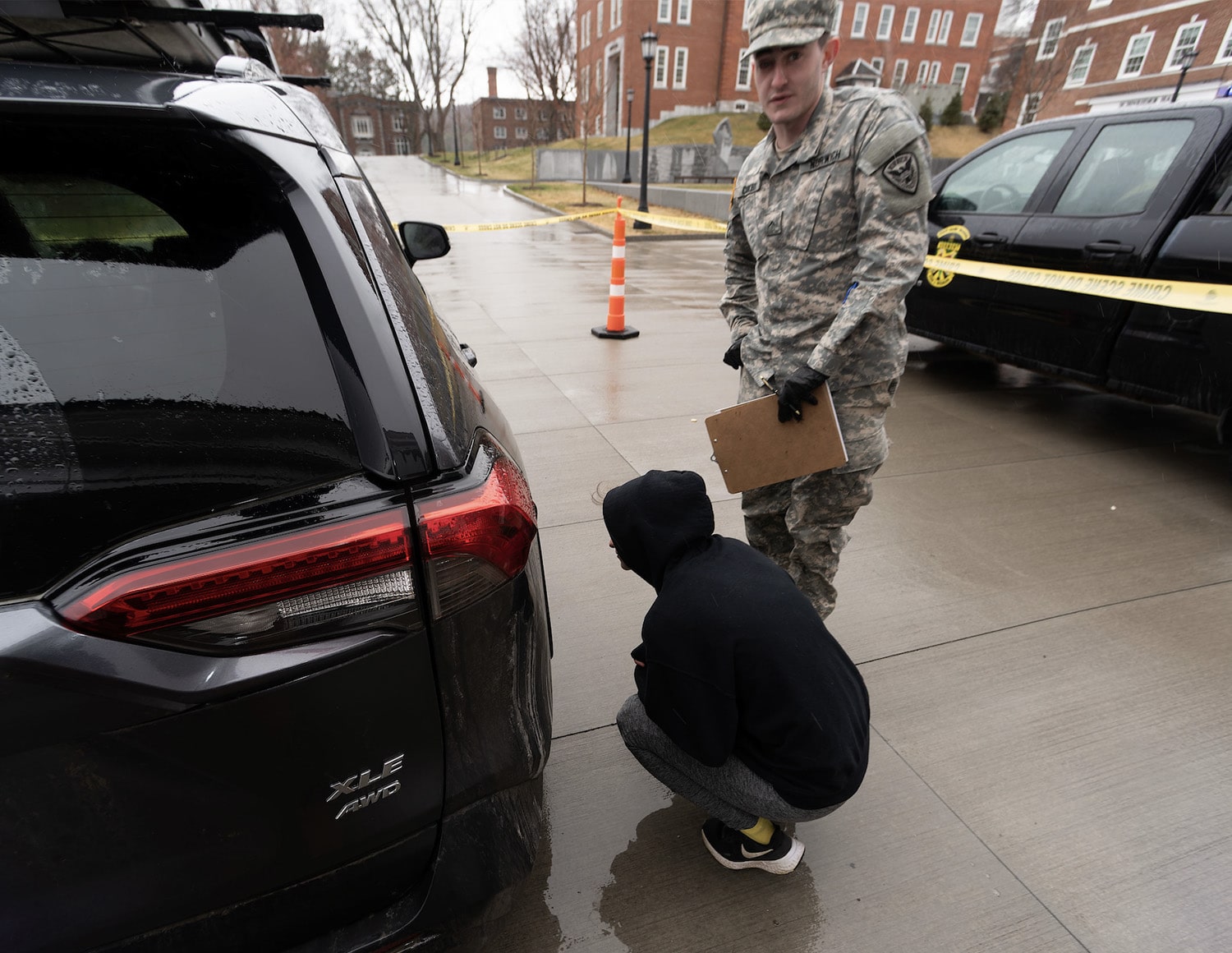 The sport utility vehicle parked by White Memorial Chapel packed more surprises than a jumbo box of Cracker Jack, and Norwich University detectives-for-a-day were itching to catalog them.

In the vehicle’s rear, students found a crossbow, spent bullet casings and a tarp thick with hair and blood, maybe animal, maybe human. In the front, the team found a driver’s license, a shopping receipt, a flashlight, plastic bottles of Dr Pepper and water and a hunting rifle.

The detective work was part of the third iteration of Norwich’s CSI Experience — an interdisciplinary, interactive universitywide event involving critical thinking, teamwork and mentorship. The coronavirus pandemic had kept the annual competition off the calendar in 2020 and 2021, but was back this year, organized by School of Criminology and Criminal Justice professors Dr. Elizabeth Gurian, Dr. Stephanie Maass and David Sem.

On April 6, students gathered at an evening reception and learn about the simulated crime they’d try to solve. On April 7, in seven hours sleuthing teams of up to six students visited a circuit of puzzle rooms to examine clues.

Each room presented a different scenario — a press conference; a timed escape;  chemical tests for blood and serial numbers; the vehicle search; a storyboard with answers in Spanish. The scenarios drew on an array of academic skills and disciplines — chemistry and biochemistry; nursing; Spanish; criminal justice; English and communications; mathematics; and psychology.

In each room, teams had 20 minutes to get their clues and earn points for teamwork and detection. The day finished with an awards dinner at which teams presented findings to a panel of judges, including incoming Provost Dr. Karen Gaines, Office of IDEAS Director Dr. Julie Bernard School of Criminal Justice and Criminology Director Dr. Travis Morris.

The grand prize was a $3,000-per-student scholarship for academic year the 2022-23. Graduating seniors who won would receive Commencement perks, including a framed diploma, extra tickets, VIP seating and lunch with President Mark Anarumo.

Forty-nine students from all class years competed, representing 31 majors, minors and concentrations and all three academic colleges — the College of Liberal Arts; the College of Science and Mathematics; and the College of Professional Schools. The highest-ranked teams had the widest representation of majors, Gurian said.

“So far, we don’t know if this connects to a murder scene,” she said. “We’re still trying to figure that out.”

Lopez, a fan of the television investigation show “Criminal Minds,” said she and her team had needed to work methodically, receiving and digesting one clue before focusing on the next.

Emma Theriault, a junior criminal justice major and civilian student, agreed, saying, “There’s a lot of notes you have to take, a lot of photographs, there’s just a lot of procedure that it’s important to follow to get the right answer. So, I think that’s the biggest thing I’ve learned, just take things slow, step by step, make sure you hit everything.”

Timothy Hodges, a junior health sciences and athletic training double major, said he was glad, despite the day’s rain and chill, to be outside doing fieldwork. He said he learned there are no shortcuts to investigating.

“We thought we had the clue, we thought we had the answers, but there were steps that we had. So, we kind of jumped over a step in the middle,” he said, recalling an earlier puzzle room. “We rushed through thinking we had it, when we really needed to check our work.”

In a U-Building chemistry lab, a team of cadet corps students worked to apply 320-grade sandpaper, a hydrochloric acid-copper chloride-water reagent and an acetone rinse to uncover a scratched-out serial number on a gunmetal fragment. Emma Ste. Marie, an assistant professor of chemistry and biochemistry, supervised.

“I think that’s before the 7, but after the zero,” junior Jonathan Stoltzfus said, peering at the emerging digits.

Preston Ennis, a junior chemistry major and one of Ste. Marie’s students, said he’d registered for the CSI Experience as a freshman but never got to do it, because of the coronavirus pandemic. Ennis pounced when the event came this year, enlisting three friends as teammates.

“It’s been incredibly fun,” he said.

Enlightening, too. Ste. Marie said alumni mentors who’d worked as police detectives told her they’d never seen what happened to samples they’d sent to labs. Students, she said, might be better prepared to hunt or handle evidence as future detectives, having understood the tests that await it.

As the schedule wound toward conclusion, a different student team walked into a Schneider Hall classroom, received by Spanish professors Dr. Kaitlin E. Thomas and Dr. Miriam Romero. One wall showed a crime scene storyboard that the team could observe or catalog, but not photograph.

By tapping the power of observation — remembering a smashed computer, a bloody wig and an inverted trash can — and using Thomas’ suggestion to look for English cognates, the team conquered the queries.

He said he felt his team had the case near resolved, having played to its strengths, especially during the press conference puzzle.

“We had only about, maybe 10 minutes, and if it wasn’t for the help of my group all together, that possibly could have been a trainwreck,” Richtol said. “But with the person we chose to present as well as everyone else putting in their 2 cents on what to present, I feel like we did an amazing job.”