For pioneering student, a raised hand and a step forward 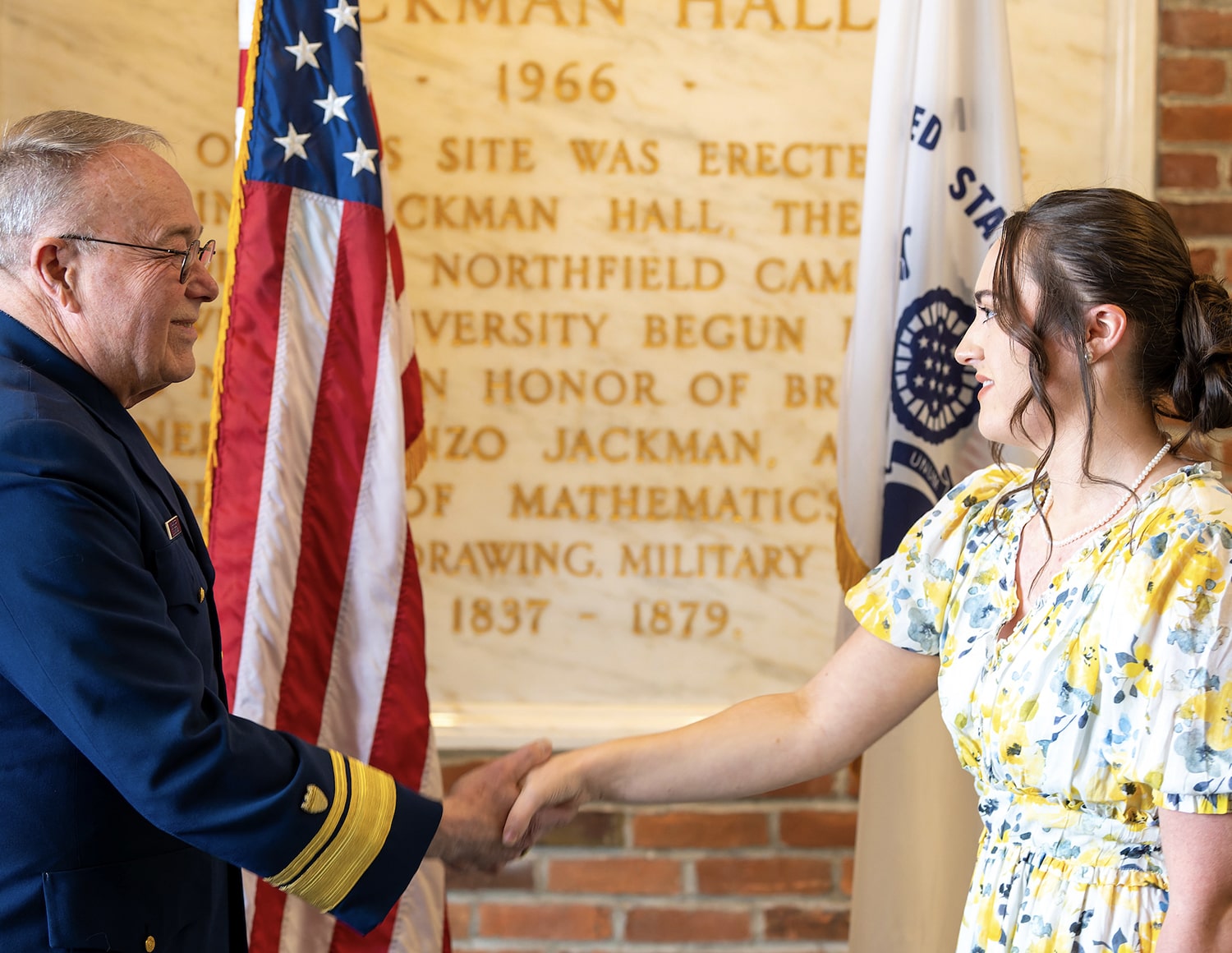 As a student, Alaina Sill wrote herself into Norwich University’s annals, becoming the first woman to join the U.S. Coast Guard-affiliated Semper Paratus specialty unit and the first to become its president. This year, she was the nation’s sole recipient of a direct Coast Guard commission through the Direct Commission Selected School program.

And on April 19, before friends and family in Jackman Hall’s foyer, the 2021 graduate marked another milestone and stepped boldly toward her future. Taking her oath from President Emeritus Richard W. Schneider, Sill commissioned into the Coast Guard as an ensign.

Schneider, a retired U.S. Coast Guard rear admiral who retired from Norwich in May 2020 after a 28-year presidency, explained the importance of oaths. Americans take them often in many varieties, he said, to the U.S. flag, as religious rites, in ROTC programs, in Norwich’s Corps of Cadets.

In 1915, the Revenue Marine Service merged with the U.S. Life-Saving Service and became the only maritime service devoted to enforcing the nation's maritime laws and saving lives at sea. Since its founding, the Coast Guard has had arresting authority on the high seas and navigable water.

Once she had sworn to defend the U.S. Constitution against all enemies, foreign and domestic, Sill told the people gathered, parents and stepparents, an aunt, Corps of Cadets officials, friends and university President Mark Anarumo, that she’d soon report to the USS Tampa, a medium-endurance cutter in Portsmouth, Virginia.

“Everyone in this room has helped me, in some way or another, get to where I’m standing today,” said Sill, who’d majored in computer science. “This ceremony is happening because of the patience of professors who helped me study for exams, thanks to my friends who gave me the strength to push through hard nights of training and thanks to the mentors who gave me the tools I need to be a successful leader to my peers. I am so thankful to the support system Norwich has provided me.”

Sill has ocean affinity, having grown up in San Diego, and military roots. Her father, who’d come from the Philippines to attend the ceremony, served in the U.S. Air Force; her stepfather, Thomas Walsh, served in the U.S. Navy. Sill said Schneider inspired her to enter the Coast Guard after explaining its humanitarian ethos and lifesaving mission.

A thrilling moment and parental pride

Sill said she was thrilled to learn she’d landed the commission.

“I was excited … it felt unreal,” she said of her recruiter’s phone call, taken at a summer job in Manchester, New Hampshire. “I was so happy that all my hard work that I put in had paid off and that I was blessed to have the opportunity to help and serve others, because that’s what it’s really about, is my having the opportunity to help others.”

Sill’s parents, both sets of them, were sure their daughter would thrive. Her father, Henry Sill, the Air Force veteran, hadn’t seen his daughter since 2020 because of pandemic restrictions. He said he was glad to see her and share the moment with his wife, Mary Jocelyn Sill, and their young son, Lukas.

“She’s very level-headed; she likes to assess the situation, or people, first before she makes a decision, so I know she’ll make a very fair, but firm, officer,” Henry Sill said of his daughter. “Every person has a chapter in their life, elementary school, high school, college, and she’s starting her next chapter.”

Alaina Sill’s stepfather, Thomas Walsh, a Navy veteran, said relentless tenacity would fuel Alaina’s success. Alaina sets goals and achieves them, he said, never needing prompting to study or work. Sill’s mother, Carli Walsh called her daughter her “miracle baby,” the product of a high-risk pregnancy who was born a month prematurely but emerged strong and perfect, poised to thrive.

Seeing her daughter commission, Carli Walsh said, has become an instantly indelible moment, just as giving birth to her was, just as dropping her off for the preschool and college’s first days had been.

“She’s just always made me proud beyond words; this is one more feather in the cap of me being proud as a mom,” Carli Walsh said. “I remember when I dropped her off here, I cried eight hours home. But I knew, in that moment, that she was on the right path toward her dreams.”

To qualify for U.S. Coast Guard direct commissions, students must have at least a bachelor’s degree from the above schools and have participated in the cadets corps, ROTC or equivalent regimented program.

The Coast Guard’s recruiting command will consider graduates of other institutions with strong ROTC or corps of cadets programs and solid academic curriculums.