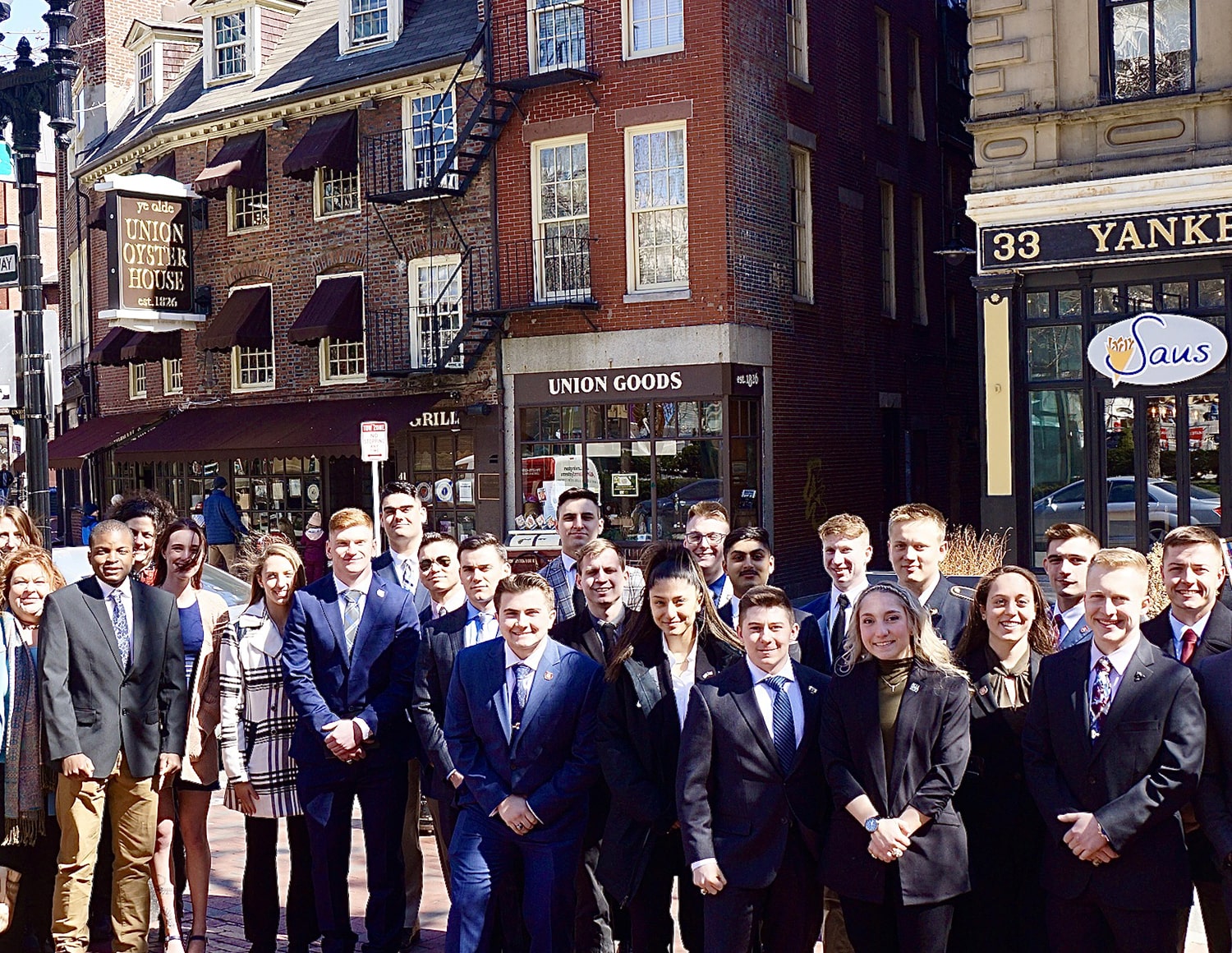 T he Boston International Field Excursion was a trip to remember.

On March 29, a delegation of 24 Norwich University Olmsted Scholars made their way to Boston to meet illustrious figures, visit memorable places and forge memories for a lifetime. As they approached the city, Professor Dr. Travis Morris delivered words that would prove truthful throughout the excursion — he reminded students that each second and interaction was precious and said the group was on this trip not as students, but as future leaders.

As the bus approached the Union Oyster House, the day’s first destination, students prepared themselves to meet Norwich alumnus Joe Milano, the restaurant’s owner. Unexpectedly, Milano, for whom Norwich’s campus ballroom is named, entered the bus and engaged with the students. Standing in the front of the bus, with microphone in hand and a smile reflecting his excitement in seeing students from his alma mater, Milano spoke to a crowd that instantly came to life; the students were thrilled to see such a famous Norwich figure. As if anticipating the future, Milano excitedly commented on the importance of the guests the students were about to meet, which was soon followed by the entrance of retired U.S. Army Lt. Col. Enoch “Woody” Woodhouse.

In a speech that was as engaging as it was inspirational, Woodhouse, who would accompany the delegation in all events, expressed his happiness in spending the day with students from his “adopted university.” Finalizing introductions, Asia McDougle-Stamey, public relations director for the Consulate General of Israel to New England, joined students on the bus to explain the day’s itinerary. McDougle-Stamey had worked closely with Norwich’s John and Mary Frances Patton Peace and War Center to make the trip and all its events possible. (Morris directs the center.)

For the second time in the day, and within a few minutes, the atmosphere among the group changed, with each person sobering up as they exited the bus and moved toward the New England Holocaust Memorial.

“This place is very controversial … It is very important to us (Jews),” were the first words McDougle-Stamey uttered as the group stood at the memorial entrance, recalling recent attempts to vandalize the monument. Students stood quietly listened to McDougle-Stamey’s every word as she explained the memorial’s construction.

Six glass towers aligned in the middle of a square, with numbers covering every inch of glass and inscriptions from Holocaust survivors on the inside walls. In a slow walk, the group passed through the towers, reading the words spoken by those who survived one of humanity’s worst atrocities. As smoke poured from vents and followed the group, adding to the somber moment, students embraced the weight of what each number on those walls stood for. Morris reminded students about “how tragic life can be” because of people’s actions.

Off to the Oyster House

Shortly afterward, students changed gears, heading to the Union Oyster House, where Milano hosted them with great joy, proudly guiding them through the different sections of the restaurant and finally to the “Norwich Corner.” As students gathered around, Milano described his time at the university and told his personal story with the restaurant. The environment was lighthearted, as some students displayed their recently acquired junior rings and told him about their experiences and aspirations.

Soon, members from the Ancient and Honorable Artillery Company of Massachusetts, entered, ready to join the delegation for lunch. Laughter and conversation flew in the room as students and guests enjoyed a meal together. The meal ended with a speech from Woodhouse, who stood in front of the room, talking about his experience in the military and giving words of advice, calling the students future leaders.

Referring to the conflict in Ukraine, Woodhouse urged students to learn and heed the advice of those who had come before them. He shared a story about his personal life when he got accepted into Yale University in a more candid tone.

“You are going to be mistreated, someday, somewhere by someone,” the retired Tuskegee Airman said as he relayed his experience as a Black person at an Ivy League college in the early 1950s. Students and guests alike were in awe of his words, and the room erupted in applause when Woodhouse challenged students to embrace adversity and work through it instead of running away.

As students headed to the day’s second destination, Faneuil Hall, the excitement was visible. They talked about the words they had heard, the people they had met, all wrapped in anticipation of the following events. Once inside the building, students dispersed, admiring the collection of uniforms, weapons, and battle gear exposed. Curator Charles Fazio, a Vietnam War veteran, began to explain the origins of the Ancient and Honorable Artillery Company and Faneuil Hall.

Students had gathered around Fazio and listened attentively to his every word, understanding his passion for a place that, more than collections, preserved the memory of those who had fought for the country. After answering questions about specific pieces and people, students, with Capt. Robert Imlach’s permission, climbed steps showing the names of the 13 original U.S. colonies. In the small room, students gathered for a group picture, documenting their shared, surreal moment. Each person observed a corner of the room, with Fazio often approaching and retelling the story behind the exhibition.

After a break, the delegation was joined by former German Ambassador Fredrick Lohr and two Israeli army defense officers. Lohr, now a professor at Suffolk University in Boston, recounted his deployments and his work with the European Union. His presentation focused on his stay in North Korea as the ambassador.

Lohr recognized the North Korean regime’s difficulties and how there was an attempt from the government to be noticed on the world stage. Lohr said he found that North Koreans were just like anyone else, aspiring to living and working peacefully.

“They are normal people, like you and me,” Lohr said of the North Koreans, as he looked at each student.

However, he said that when politics got involved, everything changed.

In a culture in which everyone was always being observed, and one mistake could harm generations of a family, Lohr explained how North Koreans learned to communicate without using words. A handshake a few seconds longer than usual; a furtive glance in a room. People had learned to be tacit, he concluded. The environment in the room was serious, with students taking notes and inquiring about the future of North Korea and its people. Lohr’s responses were sincere yet neutral, perhaps reflecting his days as a diplomat.

Lohr was followed by Israel Defense Forces naval officer Ran Koval and intelligence officer Ariel Livneh, who managed to be casual and professional. The officers explained their military service and reflected on their work, prompted by questions asked by students asked. When a student inquired about military decision-making, Ran recounted once having to decide whether to take down a missile launching and, in the process, possibly injure children, or let the missile be launched and possibly hit Israelis.

The room fell silent as students considered the scenario, trying to understand the weight on the officers’ shoulders. Some students questioned logistics and defensive equipment, and a few said they would let the launch happen.

“What we are doing is not just a job. (They) are things that affect people,” Ariel said, speaking honestly about the burdens of the job and commending American troops for enduring long deployments. “We get to go home every other week.”

The officers ended with an optimistic tone — the hope that their children will not have to fight any wars. There was a quiet understanding of what awaits those who volunteer to fight for their country in a room where many students will soon join the military as officers.

Dinner with a delegation

As the day approached its end, students were taken to the house of Ambassador Meron Reuben, where they would have dinner and join members of the Sharaka delegation. As soon as students entered the house, Reuben warmly welcomed them, making it feel like these were guests he had had over many times before. In a living room full of Israeli delicacies, every corner was taken by groups of students and guests who animatedly chatted.

Besides the guests who had accompanied the Norwich delegation during the day, the evening brought USS Constitution Commander Billie J. Farrell a special guest. Reuben organized the room to have everyone seated ready to immerse in the conversation about the Sharaka organization’s work. Its members introduced themselves and the goals they had while working for the organization.

The theme echoing in their words was similar. They all wanted to bridge the gaps in the relationship between Israel and other Arab countries. The hope brought by the Abraham Accords was visible the delegation members’ eyes. When a student asked how these accords were better than the Oslo Accords, Dan Feferman, an Israeli American author, replied confidently that he believed the countries were ready to change and cooperate. More importantly, he said he believed the Abraham Accords’ social component will allow change to occur among common citizens and not just among elites. The engagement between speakers and students was a sight to behold, with both sides actively contributing to the discussion.

Dr. Najat Al Saied, a professor from the University of the Emirates in Dubai, spoke on the impact of media on spreading messages about Israel, promoting union between people and the relationship between Saudi Arabia and Israel. A constant topic among the speakers had been misconceptions they had grown up with about Israelis and how their personal experience had changed their perspective. Yahya Mahamid, an Israeli-Arab who served in the Israel Defense Forces, explained how the fear of being mistreated because of his Arab heritage faded as he explored Israel and met Jews, leading to his eventual voluntary military services.

Similarly, author Fatema Al Harbi told about how Israeli hospitality when she arrived with the Bahrain delegation melted her misconceptions about the character of the people and showed her how welcoming people were.

The room grew serious when a retired Israeli Defense Forces air force lieutenant asked the young speakers about Iran and the possibility of the nation’s younger citizens joining the movement to mend Israeli-Arab relations. None of Shabaka’s members sugarcoated the answer — while there were certainly young Iranians ready to join the work, the regime, and fear of reprisal, made it difficult.

“Thank you for coming and we hope to do this again.” Asia McDougle-Stamey, public relations director, Consulate General of Israel to New England

Nevertheless, hope remained that one day Iran would join other Arab countries in pursuing peace and understanding in the region. Guests and students enjoyed the last minutes of conversations, exchanging information and celebrating a successful meeting. Eventually, the Norwich delegation left the ambassador’s residence thanking all guests for their time.

“Thank you for coming and we hope to do this again,” were McDougle-Stamey’s last words, closing a day on which new memories and bonds had been forged. By standing side by side with people who have been working to shape the world, Norwich University’s students learned that they, too, can impact society.

POSTSCRIPT: The group that visited Boston will travel next month the Kyrgzystan to learn about the nation’s culture, military history and religion. The George and Carol Olmsted Foundation, a Falls Church, Virginia, nonprofit, funds the excursion. The foundation supports programs for active-duty officers, service academy cadets, and ROTC cadets that provide a comprehensive education, knowledge and understanding of the political, economic and military factors involved in international relations.