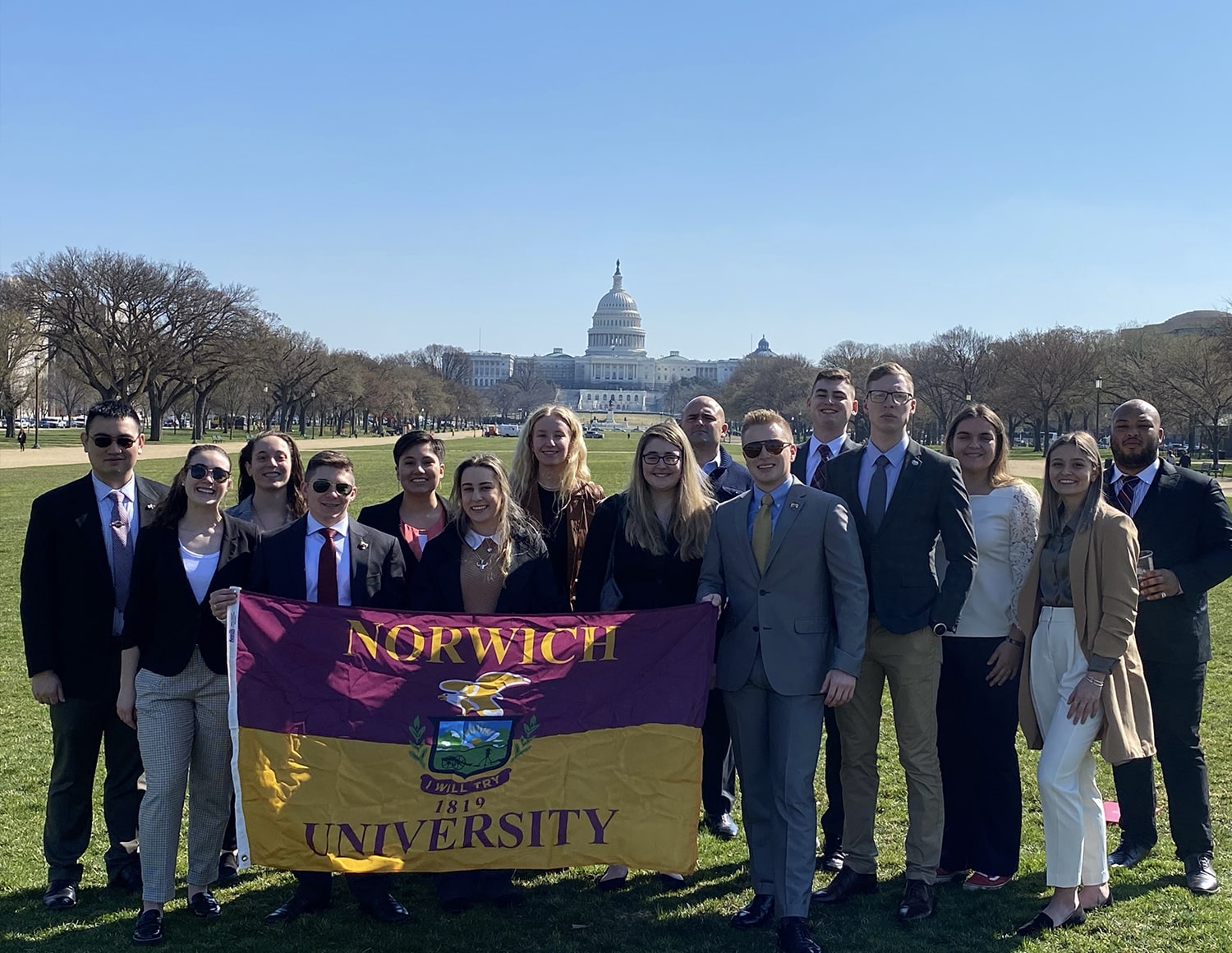 In 2022, the Security Scholars returned to Washington, D.C., for a week of institutional visits, briefings from experts, and an end-of-week presidential briefing exercise.

During the week, students learned about interagency approaches to solving the most pressing national security issues facing the United States. Briefers were impressed by the group of students, not only because of their intellectual abilities and commitment, but also because of the range of majors represented.

The students’ unique disciplinary perspectives were on display as they challenged briefers to engage with various approaches. These broad views provided by the Security Scholars enriched discussions and helped them think beyond their disciplines.

The state of world affairs sparked discussion on a range of topics. At the State Department, students were provided insights into the agency’s regional and functional expertise. The speakers covered not only substantive content, but also helped students understand the importance of interagency cooperation within the federal government. A senior foreign affairs officer from the Afghanistan desk clarified for the students U.S. policy toward Afghanistan, and Afghanistan’s interconnectedness with the rest of the region. The discussion highlighted the State Department’s need to interact beyond its regional expertise to develop comprehensive foreign policy.

Students also learned about the important support civil service officers provide foreign service officers stationed overseas. Without their support, pursing the diplomatic mission of the United States would be impossible. Students were able to hear firsthand what life is like in an embassy. All the speakers stressed the importance of language skills and an ability to live outside your comfort zone. This was especially apparent when students spoke with one of the last foreign service officers stationed in Kyiv before the embassy was evacuated. Students were following the Russian invasion of Ukraine as part of their end-of-week simulation and speaking with someone on the ground showed the complicated nature of the situation.

Interagency cooperation was on clear display when students spoke with the senior Department of Homeland Security liaison to the U.S. State Department and a former member of the National Security Council. These speakers echoed much of the material learned during the course: that responding to strategic threats requires deliberation, cooperation and expertise. Crises, like those so often depicted in the movies, are few and far between. Intelligence gathering helps the United States avoid crises that require quick decisions with incomplete information.

When students visited intelligence agencies, the speakers framed their roles in support of the mission of the United States. Again, mirroring course content, these speakers emphasized how their agencies do not make policy, but rather gather information and provide it to political actors so they can make the most informed decisions.

The clearest example was provided at the National Geospatial-Intelligence Agency (NGA), when students met with Associate Director of Operations and U.S. Army Maj. Gen. Charles Cleveland. Using the satellite imagery, elevation mapping, and urban terrains to support Operation Neptune, the covert mission to eliminate Osama bin Laden. The NGA compartmentalized the collection of intelligence to ensure only senior decisionmakers had the complete picture.

Students saw the model of the bin Laden compound in Abbottabad that was used to brief President Barack Obama. Importantly, Cleveland impressed upon the students the importance importantly/importance in one sentence of oversight and the agency’s need to adhere to legal and constitutional standards. When students pressed him about using NGA technology domestically to prevent terrorist attacks, Cleveland drew a firm line and made it clear that U.S. intelligence agencies do not gather intelligence on U.S. citizens.

While the students got a heavy dose of civil service, the trip also provided perspectives beyond the federal government. Students met with Jason Cherish, founder of Atlas Bear, a global research and consulting firm. He focused on the importance of developing your network and creating genuine connections with people. This starts with empathy, especially when trying to navigate relationships abroad. People think differently and can respond to situations in a variety of ways. It is important to enter situations with an open mind, and an understanding that a personal position might not be the most appropriate.

Students learned how private firms like Atlas Bear bridge an important gap between the U.S. federal government and populations across the globe. Several of the civil servants the group spoke with articulated the importance of private contractors in helping reach groups that might be challenging for the federal government to work with, and fill many of the gaps that personnel limitations in the government create.

In a town driven by political pressures and partisanship, it was also important for students to engage with people focused on politics. Students spent time with Adam Raezler, a lobbyist from the McKeon Group, who provided an important discussion on the role of politics in shaping the decisions made in Washington. Raezler echoed why students need to create genuine connections with people and build their networks. Unlike other professions, folks who work in Washington change jobs frequently. While talent is important, a network that can open doors and support professional growth is equally important.

Throughout the week, students gained valuable insights from a variety of experts. During their discussions, students had an eye toward the end-of-week simulation. Students were divided into two teams with each student assuming the role of a different governmental institution. The exercise took a new approach this year to increase relevancy and leverage the expertise of guest speakers. Teams were required to collaborate on a presidential briefing memo that proposed a U.S. policy to address the Russian invasion of Ukraine. Throughout the week, students received injections of information based on real events and injections created by faculty to stimulate broader thinking. Meeting with experts challenged students to rethink their preconceived beliefs, think beyond their institutional roles, and understand there is no instruction manual for dealing with contentious world events.

On the final day, each team entered the simulation with a completed memo and was prepared to brief the president. Shortly after each briefing started, students quickly realized much of formal material found in their brief was discarded. Instead, the president reframed the discussion to meet their needs and asked questions of the institutional representatives.

While students were not prepared for the briefing’s uncompromising question style, their week of research equipped them to clearly articulate a response to questions. Over several hours, teams made a series of moves, received the implications of moves and responded to evolving events. The teams provided a final brief to the president but were better prepared for the briefing style. Both acting presidents were impressed with the quality and delivery of the final briefings.

The 2022 D.C. Policy week provided an exceptional experience for students. Without the support of Norwich alumni, students would not be able to access many of the institutions they visited, nor engage with such senior policy and intelligence experts. All of the speakers were impressed with the quality of questions posed by students, many of which were questions for which our government does not have clear answers.

By the end of the week, students recognized the importance of academics. The speakers students spent time with were all highly educated, qualified, and committed to the missions of the United States. Being prepared and having command of a substantiative area is vital because you never know what questions will be asked or how it will apply to the bigger picture.