‘A lot of us Ukrainians, we want the American dream.’ 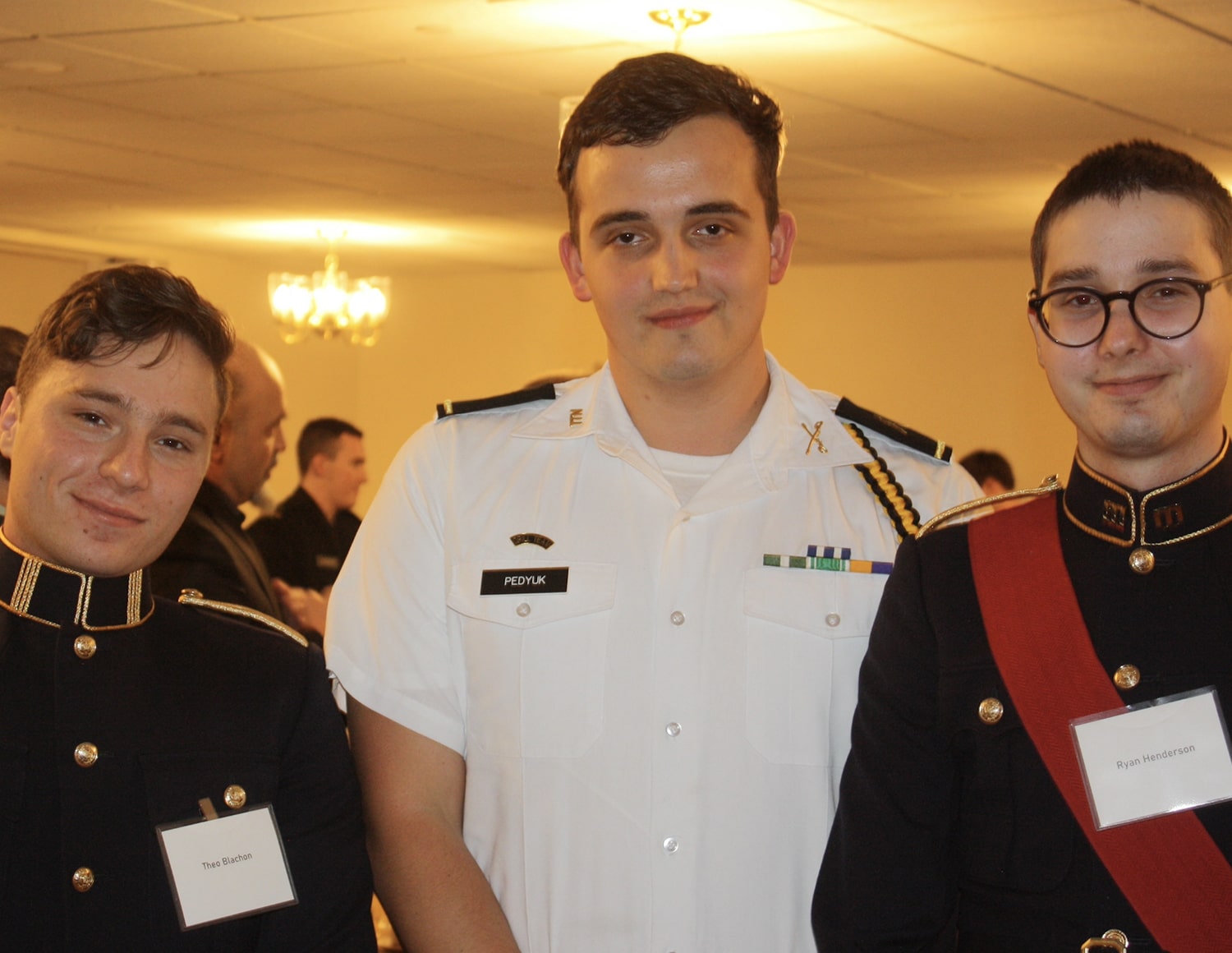 Since late February, Rodion Pedyuk has watched as Russian soldiers wreaked havoc on Ukraine, his home country, dropping bombs, leveling buildings and forcing hundreds of thousands of his countrymen to flee for their lives.

It’s been nerve-wracking and wrenching, Pedyuk, a first year Corps of Cadets member, Civic Scholar and computer science and information assurance major, said. His heart, mind and eyes have kept near home.

In a March 3 interview, Pedyuk said he’s spoken and texted often with his father, mother and 11-year-old brother, who are in hiding in country, far from their Kyiv home. He said his parents gave his brother an iPad with headphones, so he’d get lost in games and not hear whistling rockets and wailing alarms.

When Pedyuk’s not talking with his parents, working around the six-hour time difference, or attending to his studies or Corps duties, he’s watching Ukranian videos on social media.

As his family worked to survive, Pedyuk said his other family, the one on campus, rallied around him. First, they brought food. Rook siblings produced three boxes of Girl Scout cookies (the caramel coconut variety was an instant favorite). Computer science professor Dr. Jeremy Hansen made and delivered a Ukrainian meal of borscht with sour cream and bread.

The Corps of Cadets also supported Pedyuk, with special echo taps for Ukraine on March 2. (A cadet from Pedyuk’s 5th Company in the Corps blew the bugle.) And, on March 7, President Mark Anarumo joined other leaders from the Association of Vermont Independent Colleges in a statement of solidarity with Ukraine.

“As presidents of Vermont’s private institutions of higher education, we find the invasion of Ukraine by Russia shocking and unjustified,” the leaders wrote. “We condemn the atrocities being committed by the Russian government during this unprovoked act of war and abhor the great suffering, loss of human life, and displacement it is causing. … Individually and collectively, we support our students and faculty during this difficult and unprecedented time, particularly those with friends, families and loved ones in the affected regions.”

Pedyuk said the outpouring of support heartened him.

“I’m doing much better than I was this first week,” he said.

Pedyuk said Russia has been aggressive toward Ukraine long before now. Since 2014, Russian-backed separatists have fought with Ukrainians in Ukraine’s Donbas region. As CNN reported, the Russian government has recognized Donetsk and Luhans as “independent republics”; Ukraine’s government says the two regions are, in effect, Russian-occupied. No governments, other than Russia’s and Syria’s, recognize the self-declared republics, CNN reported; the Ukrainian government won’t talk directly with either.

Two Minsk Agreements were supposed to yield a cease-fire and heavy-weapon withdrawal. But the second agreement, a 13-point plan instituted in 2015 after the first agreement in 2014 failed, was never fully executed, although French, German, Russian and Ukrainian leaders attended its signing in Minsk.

More than 14,000 people have died in the eight-year Donbas conflict.

The New York Times reported that Russia’s military, at 900,000 active -duty troops and 2 million reservists, is eight times the size of Ukraine’s. Nevertheless, Ukrainians have stood stoutly against Russia so far in this conflict, Europe’s largest land war since 1945. They’ve thrown Molotov cocktails,   and taken up arms.

“Ukraine does not need to be saved from anything, because Ukrainians made their choice democratically on elections,” Pedyuk said. “Ukraine wants to be in Europe, we want to be in NATO, to develop our country into something more — bigger, better. We want to stay away from that Soviet past that still haunts us.”

Ukraine, by of vote of its people, became an independent region in January 1991 after the Soviet Union collapsed.

Pedyuk said videos and pictures Ukrainians posted on Telegram have shown Russians less prepared than forecast. As The New York Times reported, some Russian troops were carrying with meals ready to eat that expired in 2002 and some have sabotaged or surrendered their own vehicles to avoid fighting.

Pedyuk said the news from home has been brutal. Across from the nine-story Kyiv apartment complex where he lived, Russian bombs leveled a neighbor’s private home. (The man and his family had already evacuated.)

“It was eliminated from the Earth. There was nothing,” he said. “The people at home say it’s just terrible. There’s just bombing, (Russians are) shooting at women, they’re shooting children … two days ago, they shot into a railway station. … You would be planning your life for years, but the next day it was over, because right now you have to save yourself, protect yourself..”

Pedyuk said he’s been spreading awareness about Ukraine on campus and helping the people back home as he well as can. He hoped to work with the university’s Center for Civic Engagement to arrange fundraisers or ROTC units to mount canned-food drives.

On March 4, Pedyuk and a fellow Ukrainian student from Norwich visited Dartmouth College in Hanover, New Hampshire, to march in solidarity for Ukraine.

Meanwhile, Pedyuk said he’s felt well supported. Many of his Corps colleagues have donated money to support the Ukrainian army and given him breaks on room inspections. Focus on your family, they said.

“They’re there for me when I need that. I’ve gotten so much support. More than I could ask for,” he said. “This is why I love Norwich. We’re a small school, but we stick together and protect our students.”

COMING FRIDAY: A Russian student’s perspective on the conflict.