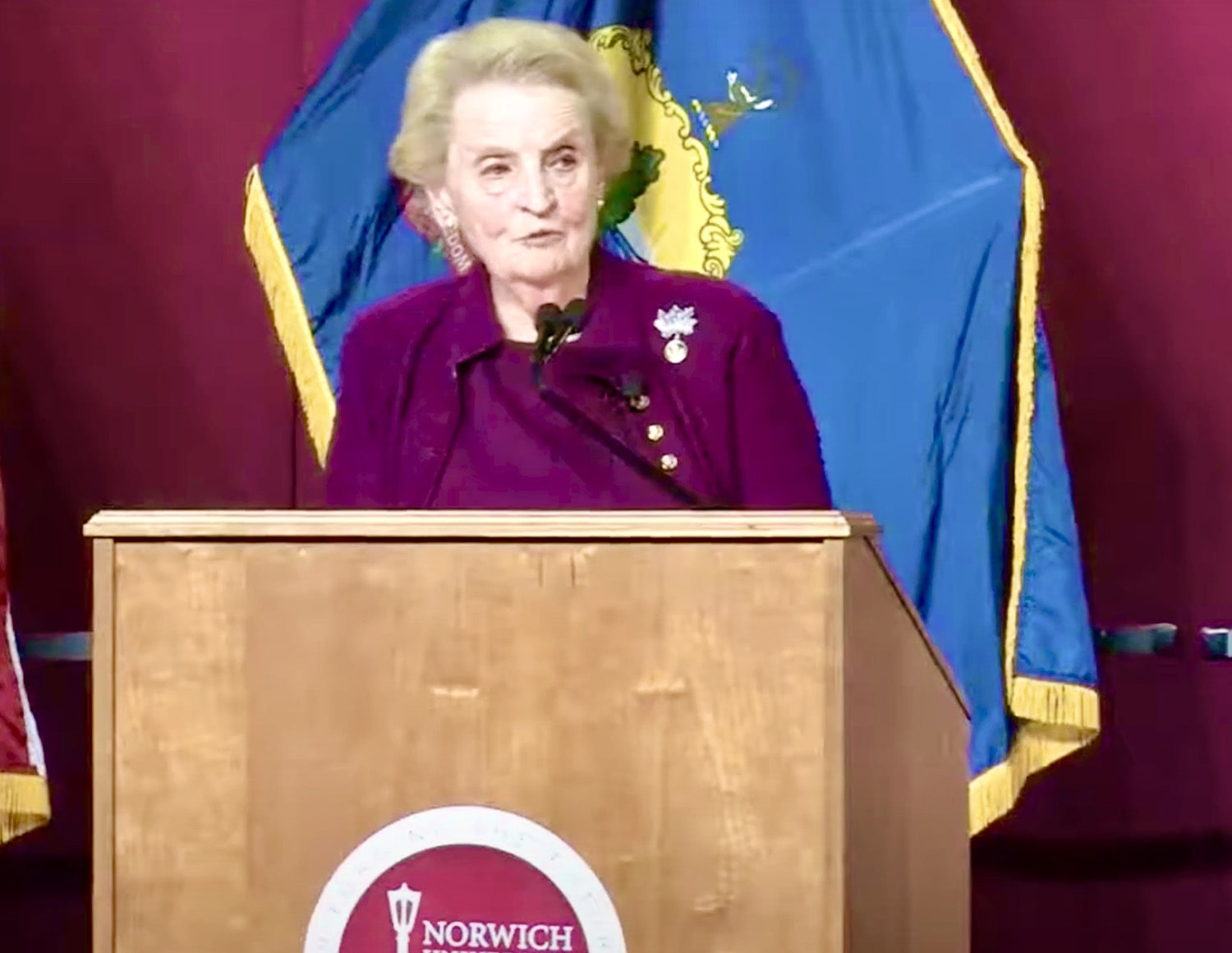 First woman to become U.S. secretary of state reflected on her life and career during 2015 Todd Lecture

Madeleine Albright, the first woman to become U.S. secretary of state, became part of Norwich University’s rich roster of distinguished speakers in 2015, when she visited campus to deliver a Todd Lecture.

Albright died Wednesday from cancer at age 84; her family announced her death in a statement. By serving as U.S. ambassador to the United Nations during President Bill Clinton’s first-term (1993-97) and becoming secretary of state in his second term (1997-2001), Albright became the U.S. government’s top-ranking woman at the time.

“After my visits earlier today with military and civilian students, I think our country will be very, very well served.” Madeleine Albright, 64th U.S. secretary of state, during her 2015 visit to Norwich University

As the 64th U.S. secretary of state, Albright reinforced the United States’ international alliances, championing NATO; advocated human rights and democracy; and promoted U.S. trade and business, labor and environmental standards abroad. She also particularly advocated for women in government and women advocating for one another, once saying, “there is a special place in hell for women who don't help other women.”

During her Nov. 3, 2015, visit to Norwich University, Albright, who was in Vermont partly to campaign for then-Democratic presidential candidate Hillary Rodham Clinton, spent an afternoon on campus, visiting classrooms to discuss her life and career. She then delivered her address from Plumley Armory, which was livestreamed to a worldwide audience.

The Todd Lecture Series is named for retired U.S. Army Maj. Gen. and Norwich President Emeritus W. Russell Todd ’50 and his late wife, Carol, in gratitude for their dedicated service to Norwich University and the Northfield community. A generous donation from Ellen and John Drew, the Todd’s daughter and son-in-law, and the Drew Foundation fund the series.

Albright spoke for about a half hour, then took questions for another half hour. She said she was glad to visit Norwich because of its reputation as a citizen-soldier training ground, higher-education pioneer and as one of the first military colleges to admit women. She hailed the university’s forward focus and goal to ready students to lead in an ever-changing world.

“After my visits earlier today with military and civilian students, I think our country will be very, very well served,” she said. “The cadets I met seemed both incredibly young and extremely bright, and they asked great questions.”

Albright told of leaving Czechoslovakia, the nation of her birth, as a child and heading for England in 1939, shortly after the Nazis invaded the country. Her father, a Czech diplomat, refused to cooperate with the Nazis, she said.

Albright recalled early memories of huddling in shelters during air raids and hearing enemy bombers fly overhead. When American armed forces personnel arrived in England on their way to vanquishing the Nazis, Albright remembered trailing behind them, in awe of their uniforms and the power they represented.

Albright also recalled arriving in New York after the war and being welcomed warmly. She said she was always grateful to grow up in a nation that cherished freedom.

Albright discussed the long post-World War II list of conflicts in which American troops have fought — Vietnam, Korea, the Persian Gulf, Afghanistan (twice) and Iraq (twice). Americans have battled, she said, amid a political backdrop complicated by religious and cultural tension, inconclusive results and a sometimes seemingly disengaged American public.

“We still speak of the military in heroic terms, but these do not always feel like heroic times.”

In an eerie foreshadowing of the current world news, Albright discussed Russian aggression in Ukraine’s Donbas region, saying, “Russia’s illegal intervention into Ukraine has given anyone who lived through the cold war a most unwelcome feeling of déjà vu.”

Although the United States and its allies had stood together to isolate Russia diplomatically and hurt it economically, Russian President Vladimir Putin’s political calculus hadn’t changed, she said.

“(Putin) proves that leaders of great countries are most dangerous when they make up their own facts,” she said, later adding, “one thing that’s clear to me is that Putin would like nothing more than to split the United States and the European Union on this issue.”

Though she was frequently serious during her address, Albright occasionally flashed humor. She said, for example, that she’d rather be surprising and provocative than revered, because she thought “revered” was a euphemism for “old,” and that her no longer being in government meant she could at last speak freely.

“As one citizen, I acknowledge an enormous debt for me to the people in this audience and those in this community who have chosen to contribute their energy and talents to the armed forces of this country,” she said. “The debt extends to all of our veterans, some of whom bear permanent scars of battle and all of whom merit a permanent place of respect in our collective memory and in our hearts.”