With virtual flights, a hope for veritable risk reduction 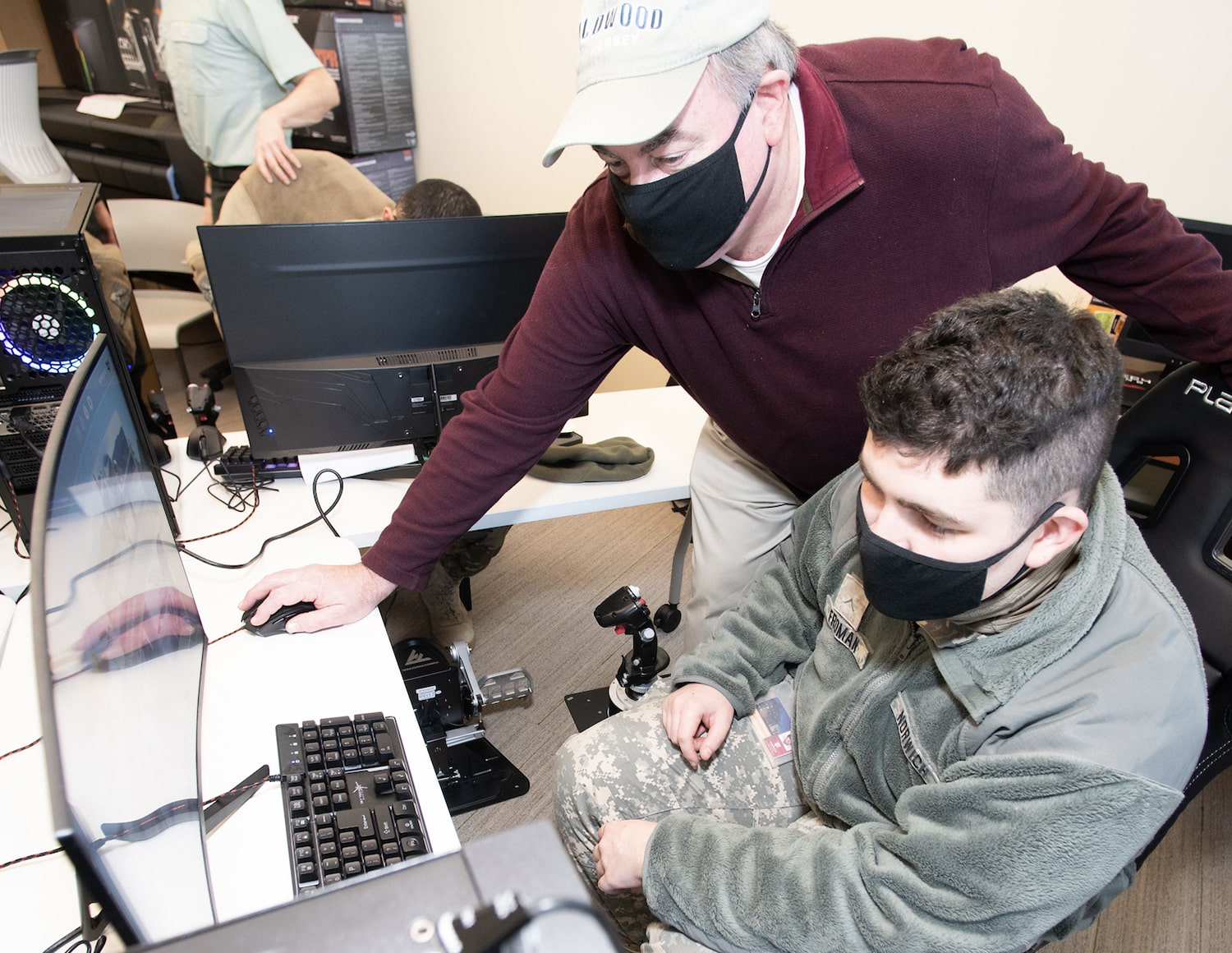 The path to safer military flights, and inside pilots minds, might start with a pyramid of parcels and a scatter of box cutters, bolts and screws.

There was so much new stuff it seemed Santa Claus had lost his way (so much for GPS) and arrived in Northfield during the intersemester break. A major Small Business Innovation Research grant from the Defense Advanced Research Projects Agency, through NUARI and in partnership with Spotlight Labs, funded the project. Judicious online shopping, done in October to avoid yuletide supply-chain snags, brought the haul to campus before Christmas eve.

“We can measure things you can’t put in the cockpit.” Kevin Fleming, Norwich University psychology professor

Fleming had ordered new computer towers with fast chips, suitable for video games and flight simulation. He had curved computer monitors and authentic flight gadgetry — joysticks for control, moving-hammer throttles for speed and metal-pedal rudders for direction. All were top-of-the-line, heavy-duty replicas of real F-16 grips and controls.

A phalanx of taller boxes contained chairs with attachable steel plates for mounting computer keyboards. Fleming said the chair boxes, which by this reporter’s reckoning weighed more than 40 pounds each.

Inverting the chair boxes, and pulling out seatbacks and cushions, released showers of zip-top plastic baggies packed with screws, bolts and an Ikea-esque array of Allen wrenches.

Fleming said the new lab, which will use Microsoft Flight Simulator software, had been planned for more than a year. He and Brian Bradke, a former U.S. Air Force pilot and F-16 pilot instructor and Norwich University professor applied for a $1 million Defense Advanced Research Projects Agency grant. Bradke applied as chief operating officer and executive vice president of Spotlight Labs, an armed forces-veteran-owned human-performance analytics and sensor company.

From 2014 to 2020, Bradke was an assistant professor of mechanical engineering in Norwich University’s David Crawford School of Engineering.

Particularly, Fleming said, Norwich University’s lab will use software-embedded trackers and wearable technology to watch biometrics, including eye blinks and reaction times, to gauge pilot health and fatigue during virtual missions and monitor radiofrequency radiation’s effect on cognition and flight-readiness.

“We can measure things you can’t put in the cockpit,” Fleming said. “Once we get all those measures, and we know how they’ve performed flightwise, we’ll run massive correlations (and) see what matches up. Good flight performance, good cognitive performance.”

When Bradke, who had researched and studied biometrics, was at Norwich, he and Fleming had run biology and physiology labs in basements of many campus buildings, including Dewey, Ainsworth, Bartoletto and Flint halls to measure eye movements, brain waves (through electroencephalograms), galvanic skin response (to gauge emotional intensity) and heart rates. The professors were watching for signals of fatigue or degrading alertness, both potential pilot hazards.

“Interestingly,” Fleming said, “when we were in the basement of Ainsworth our research in that dark, wet, and noisy labyrinth under the pipes was noted by the Navy with (its) interest in developing mitigating strategies for human deprivations on nuclear submarines.”

With Spotlight Labs, which has headquarters in Haddonfield, New Jersey, and an engineering and flight test hub in Berlin, Vermont, Bradke has studied hypoxia — oxygen deprivation that can happen during flights thousands of feet above sea level.

An engineers-and-pilots team at the company developed SPYDR, a helmet-mounted hypoxia sensor, slightly smaller than a quarter, slightly larger than a dime, that

Better knowledge may save lives. F-16 systems fly so fast (up to 1,319 mph), run on bogglingly complex systems and leave little room for error; even small performance errors can result in injury to people and planes.

“We, Norwich and Spotlight Labs, are very interested in developing the technologies that will allow not only the pilot, but also people on the ground to know, ‘Hey, we have a problem,’” Fleming said. “There are all kinds of checks and balances for all of the mechanicals, but there’s nothing for the pilot. … We’re trying to establish baselines for performance.”

Bradke concurred. In aviation’s beginnings, he said, planes were far likelier to crash as their wings sheared off or their engines failed. Technological advances, though, made modern planes supersafe, with redundant mechanical systems, escape hatches and ejector seats.

If planes crash now, Bradke said, it’s probably because a pilot failed, missing or misinterpreting information or forgetting a critical step, Bradke said. Perhaps they were distracted or tired.

Fleming said, citing a 2017 Defense Department report, that so far cognitive predictors of flight performance have not yielded desired reductions in risk, but hoped Norwich’s new simulatiom lab might contribute to a breakthrough.

Fleming added that the U.S. Air Force has set a goal to develop risk-mitigation strategies in cognitive resources by 2030, because 21st century weapons technology “demands on combat decision-makers are outstripping the cognitive capacity of the unaided human.”

He believes you can fly

Col. Mark Ciero, who leads Norwich’s U.S. Air Force detachment, No. 867, said cadets often aspire to fly before entering ROTC or pursue “rated” career tracks, which would let them become pilots, remote piloted aircraft aviators, air battle managers or combat systems officers (Ciero is a combat systems officer who has flown 2,800 hours in the F-15E and about 500 in combat).

“This initiative with the Psychology Department and (the Defense Advanced Research Projects Agency) will further our efforts to train and inspire future rated (medically qualified) cadets,” Ciero wrote in an email. “The convenience of these incredible fighter simulators will not only motivate cadets (and civilians as well) … to enter related aviation branches.”

Ciero, meanwhile, said the simulators will inspire current and next-generation students, both cadets and civilians, to pursue aviation careers and the lab’s research will answer critical questions as the integration of humans and machines goes further and faster.

“These programs, unique to Norwich, enable the Air Force ROTC program to encourage students’ experiences in careers that were previously underdeveloped,” he wrote. “We anticipate future Chuck Yeagers or Robin Olds will walk these great halls anxious to test their grit here first.”