Before takeoff, a flurry of setup 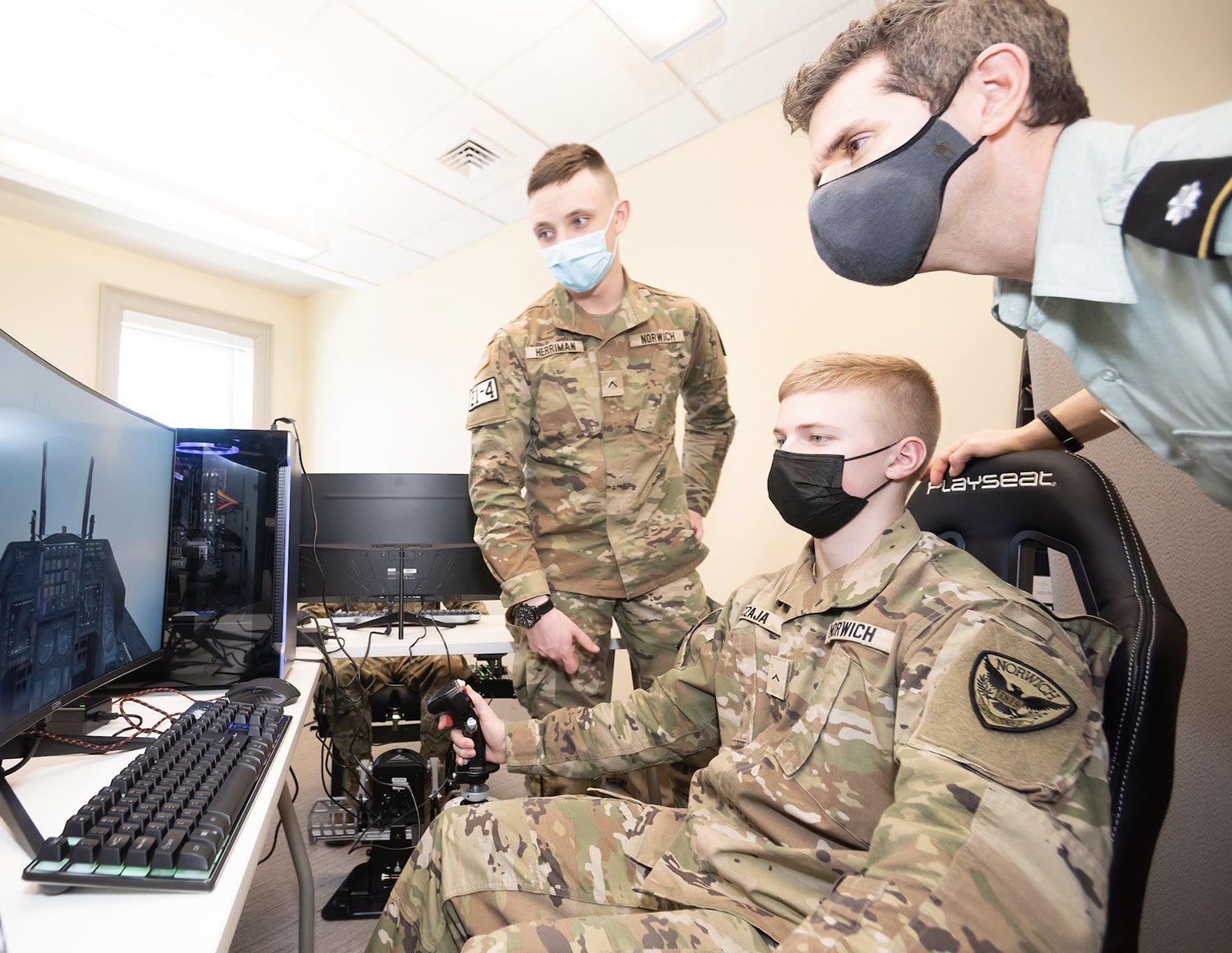 Thomas Ward had a checklist on his monitor and an instruction manual at his elbow as he sat surrounded by freshly arrived equipment in Norwich University’s new flight simulation lab. In barely a weekend’s time, psychology professor Dr. Kevin Fleming and a parade of students had cleared away a mountain of boxes, plugged in keyboards, mounted controls, assembled seats and started downloading software for the lab on Dewey Hall’s fourth floor.

“Flight sims were the only video games I was exposed to growing up.” Thomas Ward, U.S. Air Force ROTC student

A half dozen students, all U.S. Air Force ROTC cadets, were testing the gadgetry during a lab session, Dr. Matthew Thomas’ engineering psychology course. Fleming was grateful for the students’ aid; they’d more experience setting up these stations than he. Fleming said students could help coach one another on basics, so they’d be able to take off, fly and land. (Mastering nuances would take longer.) Missions might involve challenges like high winds, or engine hiccups, Fleming said, but not combat

“This is what the class is going to be like, learning at every stage,” Fleming told them, adding that they were welcome outside class if their schedules allowed. “We’ll get everybody up to speed over the next couple of weeks.”

Because his printed manual’s instructions were in 64 non-English languages, Ward, a sophomore mechanical engineering major, was using pictures as guides as he assigned functions to switches to the throttle and stick on his seat’s armrests. He’d already programmed the buttons.

“I’m just trying to figure out what the basic flight controls are so I can change them (to work with) the joystick,” Ward said. “This’ll go right, this’ll go left. Up, down,” he said. “My goal is to get these switches. If I get these switches, it’ll be really nice.”

Ward said he’d flown for real once in a Cessna and has a flight simulator at home in Lexington, Kentucky, but it’s simpler, with a single controller and older software mimicking an F-15. Ward said learned to love flight simulators because his father, a medivac helicopter pilot, brought them home to try.

“Flight sims were the only video games I was exposed to growing up,” he said.

Flight simulator games first emerged in 1979, when SubLogic created the first one for the Apple II. Microsoft Corp.’s first flight simulator, written for the IBM PC, debuted in 1982.

Charles Herriman, a freshman electrical engineering major, entered the Dewey lab and took over setup as Ward left for another class. Like Ward, he’d flown many simulated flights, having spent five years building a complicated at-home system, which has video screens and rudder pedals. (Friends helped him with programming and calibration.)

“It’s an expensive hobby,” Herriman, of Newburyport, Massachusetts, said, “but I wouldn’t give it up for anything.”

Herriman said he hopes to fly for the U.S. Air Force and has complimented 1,000-plus virtual flight hours with 85 real ones in small-engine planes. He’d been hooked on flying for four years, since his father gave him an orientation flight as a gift.

Herriman said he’d finished ground school and had hoped to secure his private pilot’s license and fly cross-country before the coronavirus pandemic hit. Now he hopes to test for the license this summer.

Love of flight grew out of a desire to drive things, Herriman said; he was usually the one clamoring to pilot the all-terrain vehicle or the Jet Ski. Soaring over his house on his first flight pushed him pursue the sky.

“At 1,200 feet, 1,500 feet everything looked so foreign to me from up there,” said Herriman, whose Snapchat handle is the tail number from the first plane he ever piloted. “It just turned into a whole different world that a realized not to many people get to experience or get to see. I just got hooked on living in that world as much as I could.”

Slowly, as software finished downloading and Herriman and Ward’s efforts paid off, the Dewey sim lab’s screens filled with virtual vistas and its air hummed with virtual jet engines.

“Throttle idle off,” Herriman said, pairing a function to a switch. “There’s the speed that I wanted.”

Mejia-Lopez eagerly awaited his turn in the virtual cockpit.