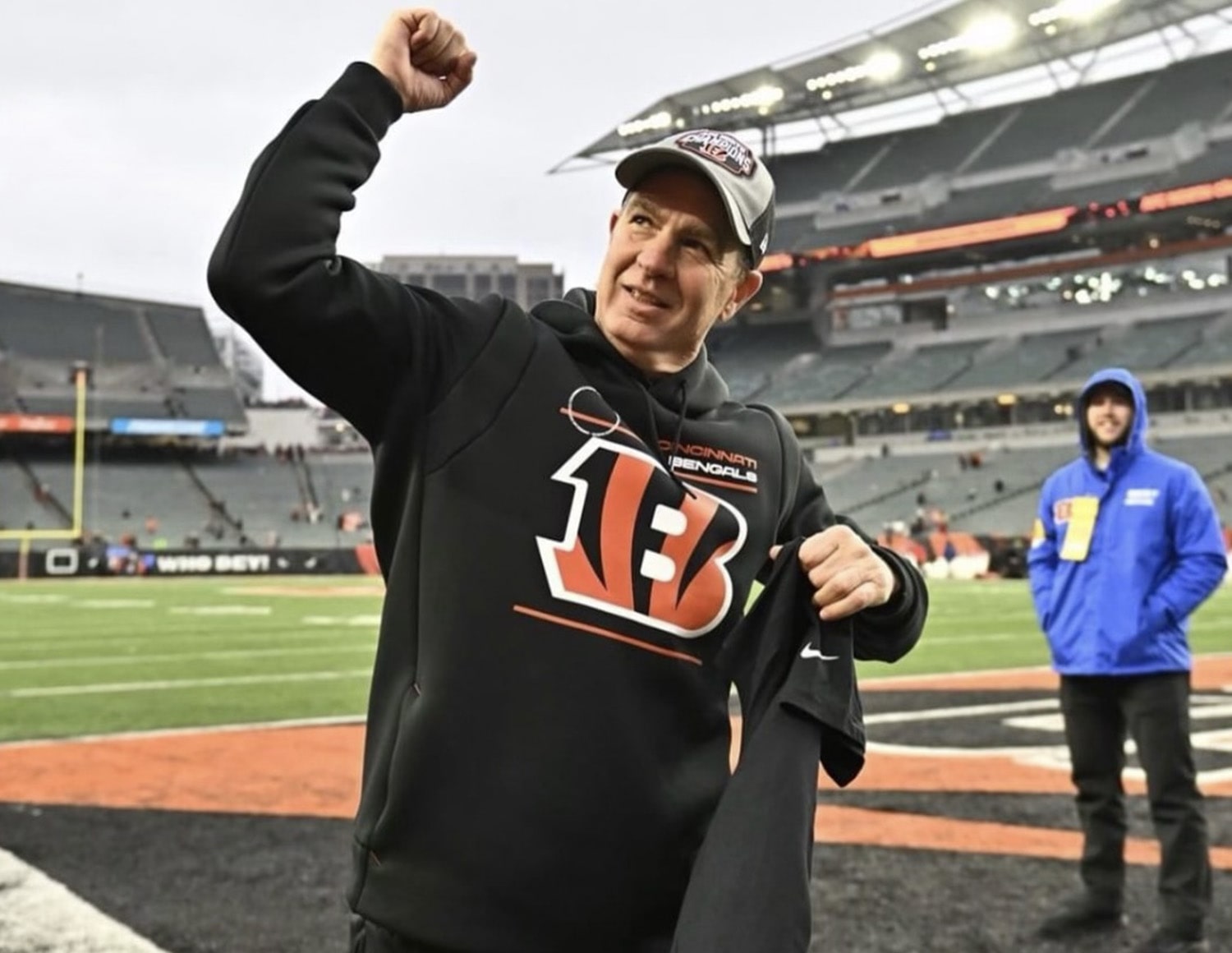 If you Googled “ANARUMO” six months ago or longer, the top hits would have involved Mark Anarumo, as in the retired U.S. Air Force colonel who’s now Norwich University’s 24th president. However, after recent moments of gridiron grandeur, another Anarumo has achieved search-term supremacy, a fellow named Lou.

Lou Anarumo, the Cincinnati Bengals’ defensive coordinator, made headlines as his team advanced through the American Football Conference playoffs. On Jan. 30, the Bengals erased an 18-point deficit to top the Kansas City Chiefs 27-24 in overtime in the conference title game and advance to Super Bowl LVI.

The Bengals will play the Los Angeles Rams at SoFi Stadium in Inglewood, California, on Feb. 13. Cincinnati, which won just two games during the 2020 season, was a 125-1 preseason long shot to reach the Super Bowl and hasn’t played in the game since 1988.

Lou Anarumo is Mark Anarumo’s second cousin. And, as the university president forecast, a Feb. 3 Google search gave Lou the first eight results. The list included stories from the New York Post, The Athletic and northjersey.com, some about the Bengals, others about Lou Anarumo’s having interviewed for the New York Giants’ head coach job. (Brian Daboll, who’d been coaching for the Buffalo Bills, got the Giants gig.)

Mark Anarumo said he and Lou, part of a large Italian family, have Staten Island, New York, roots (Mark Anarumo attended elementary school there) and grandfathers who lost their parents during the 1918 influenza pandemic and grew up in an orphanage. Mark’s grandfather was Anthony Anarumo Sr., a longtime baseball coach who won two American Legion World Series and was inducted into the Staten Island Sports Hall of Fame. Lou’s grandfather was Pasquale, Anthony Sr.’s brother.

Lou Anarumo, 55, has coached football for 32 years. His college coaching stops include the Merchant Marine Academy (a Norwich University football rival in the New England Women’s and Men’s Athletic Conference) Marshall University, Syracuse University, Purdue University, Harvard College and Wagner College, where he played his college football and earned his degree in 1990.

As Mark Anarumo, who is 51, noted, Wagner still has Anarumos on faculty. (Rosemary Anarumo is faculty secretary there; Dr. Felicia Ruff, Mark’s stepmother and a guest at his September 2021 inauguration, teaches performing arts.)

In the pros, Lou Anarumo has coached defenses for the Giants, his favorite team growing up, the Miami Dolphins and the Bengals.

During a flurry of pre-Super Bowl interviews, Lou Anarumo described growing up as a New York Giants fan and watching games with an uncle in Giants Stadium’s upper reaches.

“That was my hometown team, my hometown everything when I was growing up,” he told the New York Post.

Lou Anarumo told the New York Daily News coaching for the Giants during the 2018 season meant home surroundings and home cooking with “unbelievable” meals from his mother.

Mark Anarumo said he’s giving Lou space to prepare for the game and manage the fever-pitch Super Bowl hoopla. However, he said the Anarumo family has been celebrating and his phone has pulsed with calls.

The president said he’s talked about the Bengals with his cousin Joe Anarumo, who is Lou’s first cousin and the former special agent in charge for the Bureau of Alcohol, Tobacco, Firearms’ New York Field Division.

“We talked after the (conference championship) game and compared notes. We always joke that Grandpa Tony and Grandpa Pasquale are looking down from heaven on … what’s happened since after their orphanage run and must be feeling pretty good,” the president said. “We’re just very proud of Lou. The guy paid his dues; he started being a graduate assistant, being a positions coach, up and down. … He has worked … to get this opportunity and obviously he’s making the most of it.”

Mark Anarumo said although he’s a diehard New Jersey Devils hockey fan, he’s never had a favorite pro football team. He said he will, however, be rooting hard for the Bengals.

“As of right now, I’m the most passionate Bengals fan you’ll ever meet,” the president said with a laugh.

Mark Anarumo has even floated the idea of taking his son Nick to the Super Bowl, to continue a long tradition of seeing a National Football League game in person every season. (The coronavirus pandemic scrapped plans to see a regular-season game, he said, and ideas to see playoff games in Buffalo, New York, and Tampa, Florida, evaporated when the Bills and Buccaneers didn’t advance.)

“I don’t want to burden Lou and his family with a (ticket) request, because he’s probably getting too many as it is,” Mark Anarumo said. “But we’re looking, we’re curious. And if we can get out there, we’re going to. All the Anarumos, we’re all trying to go as a large group with the same very unique last name.”

Norwich’s president isn’t confident he’ll land tickets. But if he does, he’ll wear maroon and gold.

“I wear my Norwich garb everywhere I go,” he said.