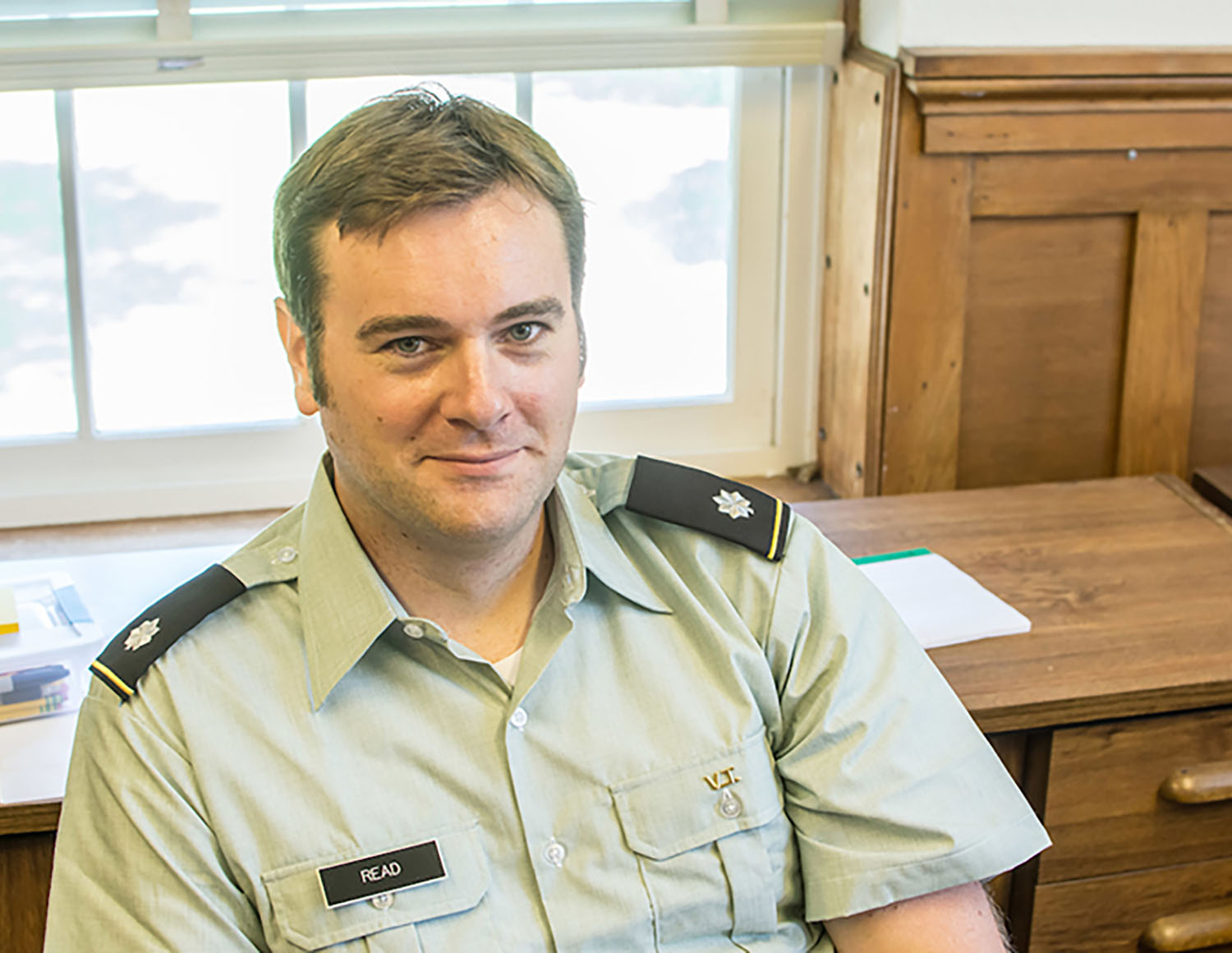 With classes over for the fall semester, and sporting the beginnings of what he called his “Christmas beard,” Huw Read looked out the window of his Dewey Hall office into the mild Vermont December. “It reminds me of Wales,” he said, recalling his home country. “It’s like this, kind of drizzly, rainy weather, all day, every day. Keeps your hair curly.”

Last summer, Read and his family—he and his wife have two small children—arrived in the U.S. from “across the pond,” and he became the director of Norwich University’s high-profile Center for Advanced Computing and Digital Forensics, following the retirement of Peter Stephenson.

Chuckling, the computer-security professor quipped that losing the beard was a bigger adjustment than moving to the U.S. “My better half is from Colorado,” he said, and over the years he’d visited the States more times than he could count. “But I’ve worn a beard from 1999 until August 27, 2015—the day before faculty had to be in uniform!”

Read’s personality and teaching style are as lively and multi-layered as his casual speech, laced with humor and vibrant imagery but with underlying substance. It suits him, and the work. Clear, illustrative communication is critical in the highly complex field of digital forensics.

In lay terms, digital forensics involves recovering and analyzing data from digital devices. And as Read’s students discovered last fall during a mock trial, even hard data can be interpreted more than one way. “One group was looking at a piece of digital evidence from the perspective of the defense, and the other group was looking at the same piece of evidence but from the prosecution side,” he said. “It woke them up.”

In his office, Read rifled through a worn, brown leather bag and produced, of all things, a Barbie doll.

“The students looked at me in much the same way you are,” he jibed. “But here.” He held the doll out. “This particular model—and it’s an older model—has a camera in the upper body that can record for half an hour.” Newer models, he said, have Wi-Fi capabilities. “That means the data is being sent somewhere. So what happens if someone malicious is harvesting data from your child’s toy?”

Norwich University is at the cutting edge of cybereducation, with programs that rank tops in the nation, and NU’s Computer Security and Information Assurance graduates are in high demand.

“The students most typically have positions lined up well before the end of their senior year,” says Aron Temkin, dean of the College of Professional Schools. “And prior to graduating, our students seeking internships often have placements before the end of February.”

But with cybercrime becoming ever more pervasive, Read aims to take Norwich digital forensics to the next level. As 2015 rounded to a close, he spent winter break laboring vigorously on grant applications, seeking funding to build more specialized training labs on campus. He says that in the field, they’re always racing to keep pace with the latest hacking methods flooding cyberspace. “We need to try to narrow the amount of time it takes to catch up.”

Of the many facets that drew him to Norwich, Read places the students at the top of the list. “I’ve said it many times before, but I genuinely mean it: I was blown over by the students and their enthusiasm for the subject,” he said. “Now at this point after having had a semester with them—and now that I’m no longer just some new prof with a silly accent—I can say with the same enthusiasm that they’re a great bunch, and they really want to go on and do good in the world.”