For a thrilling win and national mention, nothing glitters like this goal 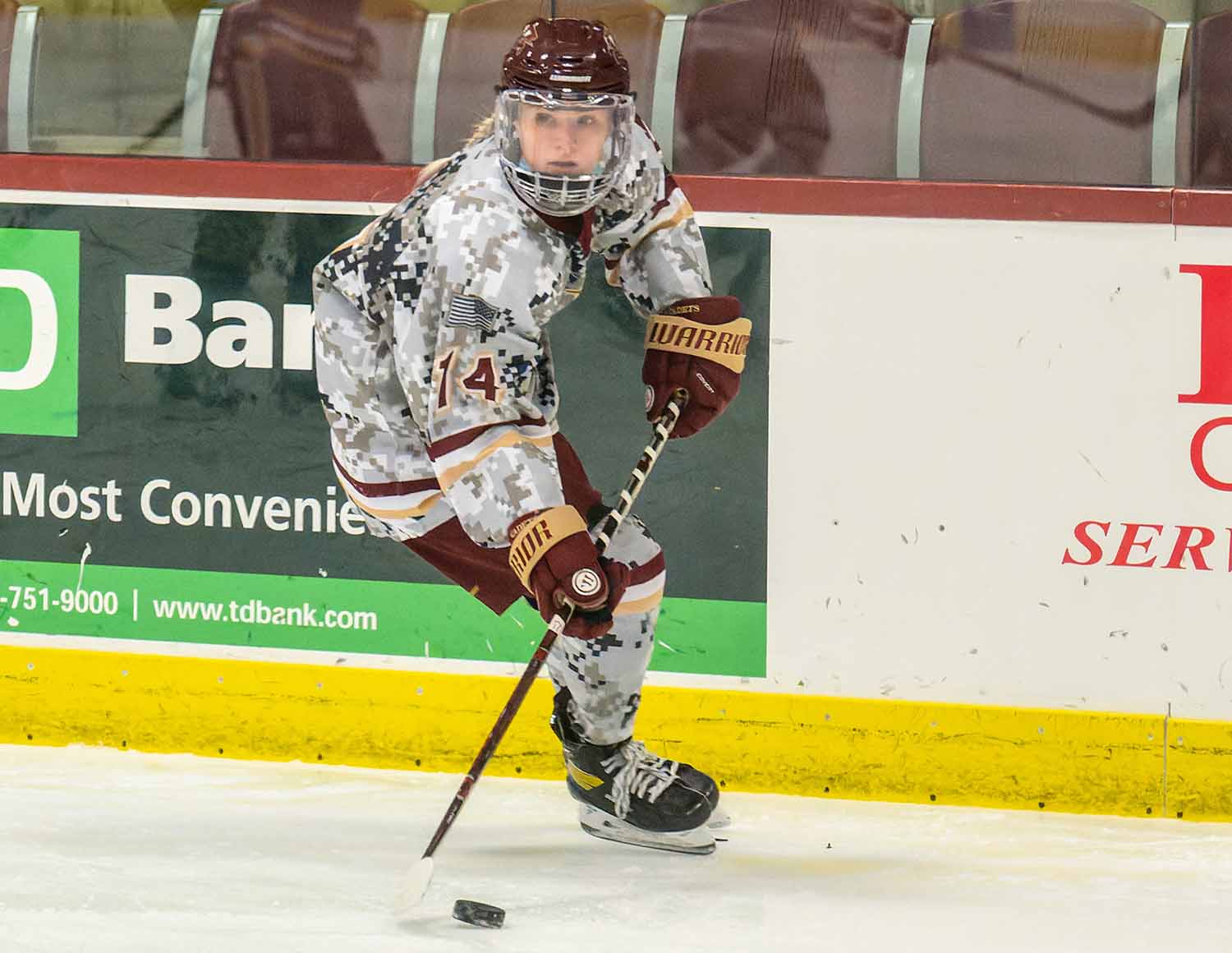 Call it Morgan Tefft’s terrific triple, a moment that layered sweet on sweet on sweet like a gourmet slice of ice hockey tiramisu. A spectacular goal … wins a game in sudden-death overtime … and gets broadcast on national television.

Tefft, a senior defender from Redwood City, California, had already scored a big 2021-22 highlight, earning New England Hockey Conference Player of the Week for Dec. 6 through Dec. 12. On Jan. 7, in a Kreitzberg Arena game against Geneva, New York’s William Smith College, she topped that accomplishment, helped by ESPN.

Tefft already had a goal for the night, having opened the scoring on a rebound shot 2:59 into the first period. Then, with the game tied 2-2 and 20 seconds gone in the extra period, her big highlight, which both made and continued a string of Norwich history, unfolded.

“The moment presents itself in an instant, and to have Morgan and Julia connect on that play in the fashion that they did is, honestly, pretty incredible and remarkable.” Sophie Doherty, head coach, Norwich University women’s hockey

Junior forward Julia Masotta, who was on the rink’s right edge, carried the puck over William Smith’s blue line. As a defender closed in, Masotta passed the puck toward center ice, for a racing-in Tefft.

“I knew the puck was going to be placed really far in front of me, if I was even getting it,” Tefft said Wednesday. “I was just driving the net, hoping to open up some space for the shooter. But then I got the puck.”

With William Smith’s Laura Hill closing in from behind, Tefft dove full-length, extending her stick and deflecting the puck toward the net’s right corner. As Tefft landed, stomach-to-ice, the puck slid past William Smith goalie Erin Murray.

“It was the end of the game and we were tired,” Tefft said, recalling the overtime. “Before the faceoff, we said, ‘We have to score.’ We figured out how to score.”

After the goal, Tefft scrambled to her feet, skated behind the goal and pawed the air in triumph. Two teammates met her there for a group hug.

The joy apparently radiated 200 miles or so south to Bristol, Connecticut, and ESPN. The goal ranked first among SportsCenter’s Top 10 Plays.

Tefft said she hadn’t known she’d been on television until the morning after the game.

“I woke up and (the video) was in (our team’s) group chat,” she said Wednesday, adding that she’d received about 50 congratulatory text messages. “My phone was blowing up.”

RIsing to the occasion

“As a group, you want to shine in those moments, and you talk about it and everybody looks and wonders who’s going to be the one to be the hero,” Doherty said Wednesday. “The moment presents itself in an instant, and to have Morgan and Julia connect on that play in the fashion that they did is, honestly, pretty incredible and remarkable and, in my opinion, is just a snapshot of what our team can do this year.”

The highlight gave Norwich University its first women’s hockey SportsCenter Top 10 Play, its highest-ranking such play and its third in three seasons. The other Top 10 Plays came from men’s players — Carter Cowlthorp’s Feb. 28, 2021, goal against Connecticut College, which ranked No. 8; and Ryan Boucher’s Jan. 13, 2020, falling-down goal against Middlebury, which ranked No. 6.

Hockey players Tom Aubrun and Amanda Conway, both class of 2020, added a fourth, though unranked, highlight, March 28, 2020. ESPN shouted them out on Senior Night, which celebrated senior college student-athletes whose seasons were cut short by the coronarvirus pandemic.

“It’s been an incredible year so far and we have an extremely talented group,” she said.  “We’re just starting to find our stride at a great time heading into the second half.”

“As a moment goes, it ranks pretty high,” Tefft said of the goal. “But I’m saving the No. 1 spot for, hopefully, a championship.”