There for the patients, there for one another 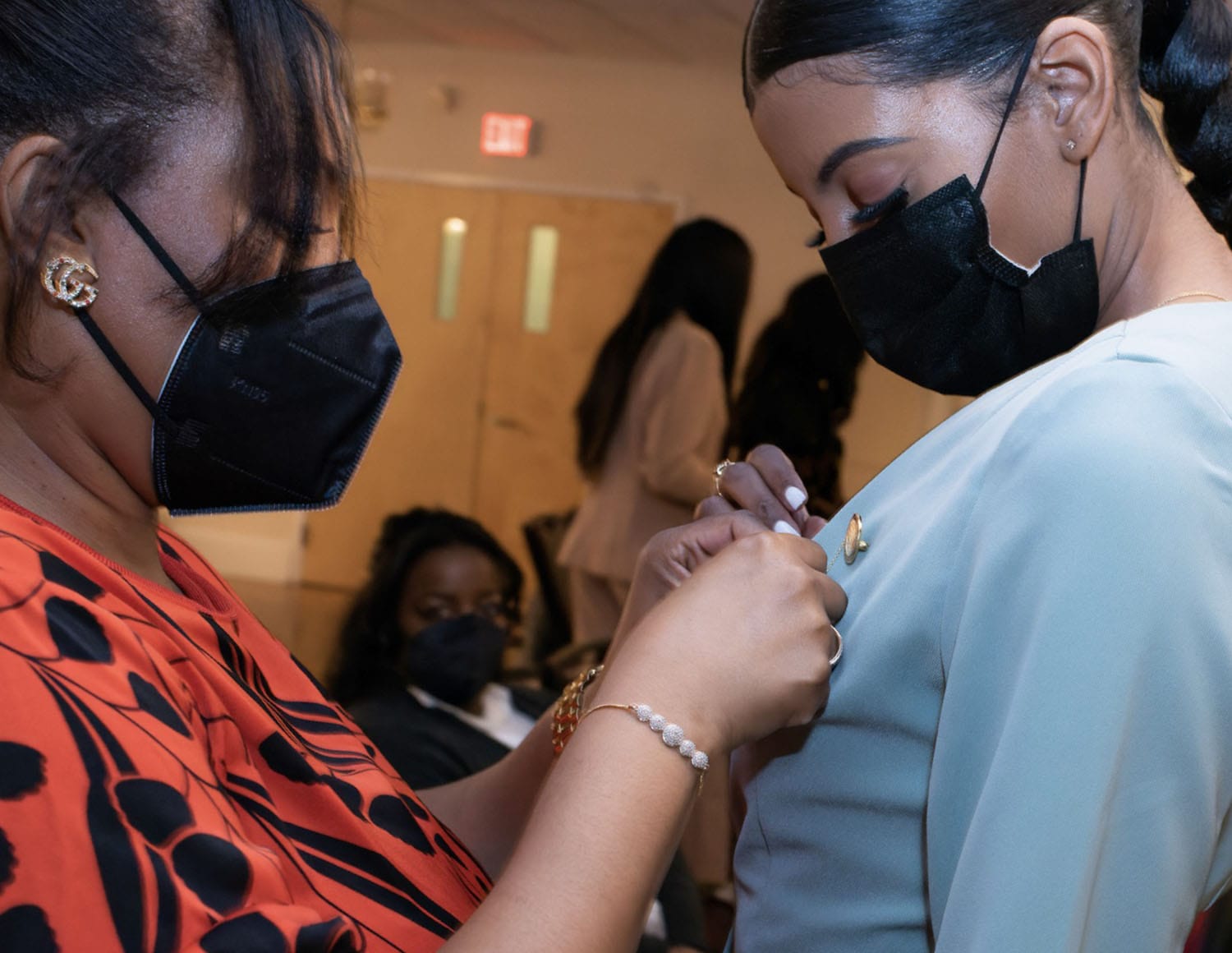 “I had to adjust,” the Brooklyn, New York, resident said, “being able to change my sleep schedule and attending classes and making sure my work was in on time. I made sure that was done.”

“I congratulate you and I commend you for digging deep and finding the determination, the grit and the resilience that was needed to get through these past five semesters.” Paulette Thabault, Norwich University nursing director

Before the students received pins signifying their program completion, Norwich Nursing Director Paulette Thabault traced the pinning tradition to the 1860s and British nurse and social reformer Florence Nightingale (1820-1910). Nightingale, who transformed nursing by setting new sanitation standards, received the Red Cross of St. George for her patient care during the Crimean War and then began presenting medals to diligent graduates of the nurse training school she established with St. Thomas’ Hospital in London.

By tradition, Norwich University’s students, who had the National Council Licensure Examination as a final hurdle, could choose anyone to affix their pins. Many proud parents did so at Plumley.

Thabault said December’s cohort was the first to have their Norwich University program bracketed by the pandemic, which as Nieves described, required adjusting.

“Your path to professional nursing was unlike any other — it has included remote learning, COVID testing, wearing masks, wearing (personal protective equipment), supporting those with illness and maybe even some loss,” she said. “I congratulate you and I commend you for digging deep and finding the determination, the grit and the resilience that was needed to get through these past five semesters.”

As at past pinnings, President Mark Anarumo relayed his family nursing ties. His mother had become a nurse in 1968, and left him a box of her mementos, including her nursing school pin and diploma. Anarumo’s mother died when he was 5; his grandmother gave him the box, which he’s carried through world travels with the U.S. Air Force and into Woodbury Hall.

“He could take or leave almost every doctor he talked with,” said Anarumo, who’d come off the road after a flurry of  Presidential Inauguration Tour fundraising. “The nurses were the ones who saved his life and kept him going and helped him recover so he could get back on his feet.”

“The nurses were really great to him, and that was the final push,” Pabst said, recalling his death during her St. Michael’s sophomore year. “Then I started working at an assisted living facility in Winooski and, I was like, ‘This is it, I love it. I definitely want to be a nurse.'”

Pabst said she’ll soon move to Salt Lake City, to work at a surgical trauma center and be near a sister. (She’ll bring along her boyfriend, a Norwich University criminal justice graduate). She said she was glad to have to pin in person and have her professors’ support.

“Absolutely amazing, the professors here,” Pabst said. “I hear friends from other nursing schools come home crying because their professors were terrible and mean to them, and our professors have never been anything but supportive, especially Llynne (Kiernan) and Jamie (Maxham-Robillard). They’ve been, like, the biggest cheerleaders for our class.”

Thabault encouraged the students to seize chances to lead, and Nieves remembered a fraught hospital shift when she did. When a man arrived with in-progress heart attack, Nieves’ well-practiced patient-first ethos clicked in; she assured him he wouldn’t be alone and that she’d tell his family what was happening. She rode with him on the 40-minutes-or-so ambulance trip from her hospital in Berlin, Vermont, to the University of Vermont Medical Center’s cardiac catheterization laboratory in Burlington, Vermont.

“Just being able to see that interaction with the patient, being able to be active and making sure he was stable enough,” she said, recalling what had mattered in the moment. “And he lived.”