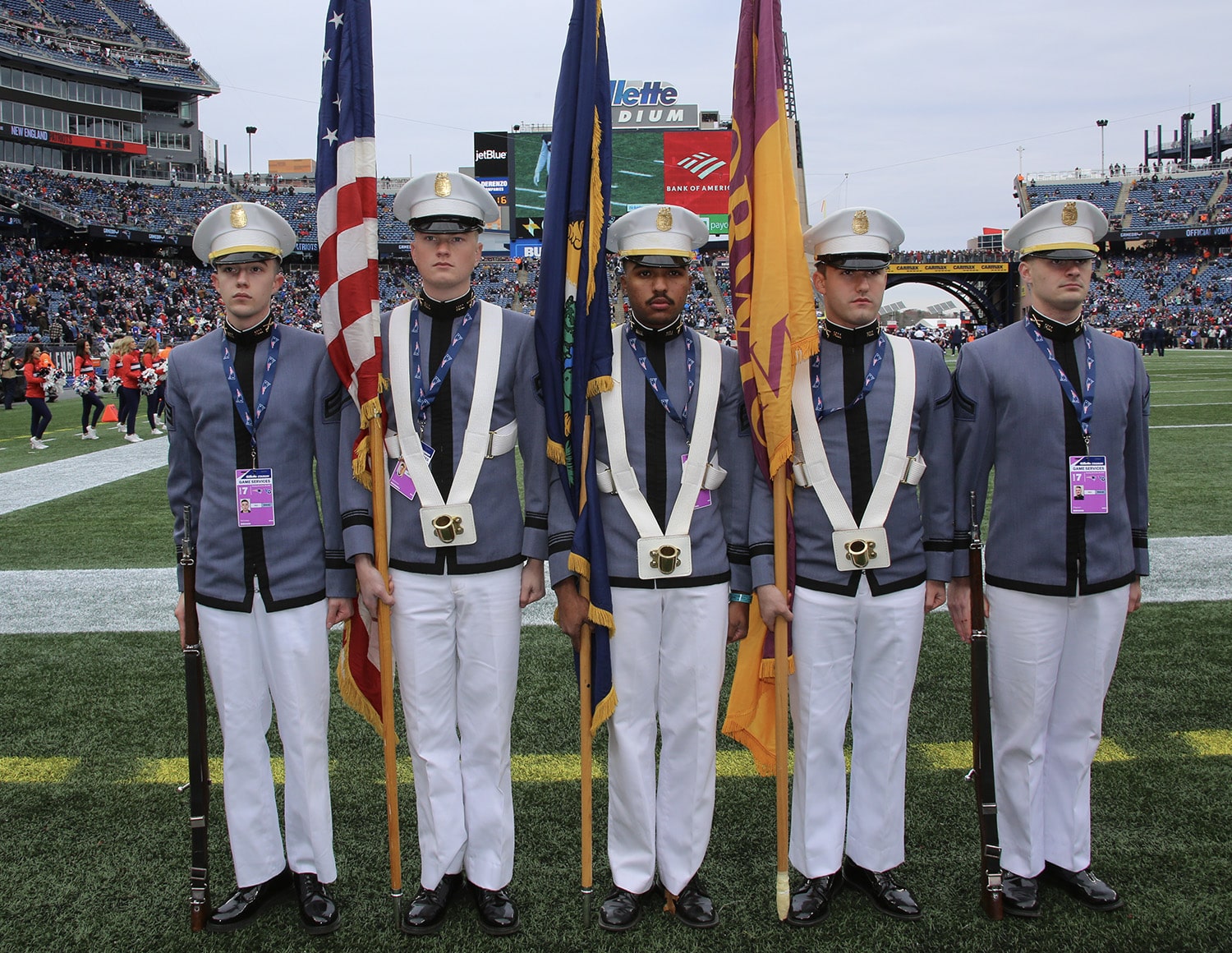 When Col. Todd Edwards called for Regimental Color Guard volunteers early last month for a post-Thanksgiving task, he didn’t say why or what for. He said the task would be in Boston and require ceding some holiday recess to return to campus early, but little else.

He wanted to see who’d step up, to show their true colors (and carry Norwich University’s).

“I just said, I needed the Color Guard, who can do it?” said Edwards, a Corps of Cadets assistant commandant who oversees the Color Guard and Drill Team and conducts the Regimental Band. “They came back and said, ‘Well, you know, sir … a lot of guys didn’t want to do it. I said, ‘I see.’ When I told them what it was for, they said a lot of guys said if they’d known that, they would have volunteered.

The Nov. 28 trip to GIllette Stadium marked the first time Norwich University’s Regimental Color Guard, which is also Vermont’s official Color Guard, had been at a New England Patriots, or any, National Football League game.

The mystery task was heart-stoppingly enviable — present flags Nov. 28 in Foxboro, Massachusetts, on Gillette Stadium’s field, before a New England Patriots football game. Millions of people would watch, in person and on television.

Edwards got five volunteers — José Cortorreal, Nicholas DiBiasio, Jesse Germano, Clayton Mersing and Alphonsus McConnell. Not only did they get a flash of field time, they got tickets to stay and watch the Patriots top the Tennessee Titans 36-13.

It was the first time Norwich University’s Color Guard, a Corps of Cadets specialty unit, had been at a Patriots game, though it has performed at Boston Bruins hockey games and Boston Red Sox baseball games.

“I told (the volunteers), ‘You knew what needed to be done,’” Edwards said. “Right before they went on (the field), I said to them, ‘Maybe next time, more people will be willing to sacrifice.”

Cortorreal, a senior majoring in criminal justice and pursuing the U.S. Marine Corps,  said he had, indeed, struggled to find volunteers, especially with so few details to share. The volunteer pool was so small that he signed himself up.

Discovering the task was thrilling, McConnell, a junior, said he’d been to a National Football League game, but he’d never been on the field.

“It was incomparable to anything I have ever experienced before,” he wrote in an email.

Cortorreal, who grew up in the Dominican Republic, said he didn’t understand American football until he’d started visiting the United States. Once he understood the game, he’d wanted to see the pros.

“This was my first time watching a (professional) football game in person,” wrote Cortorreal, who carried the university’s maroon-and-gold flag. “And, oh man, what an incredible experience.”

The Color Guard’s time sacrifice was 15 hours, including a 6 a.m. bus departure and a 9 p.m. return. Dress rehearsal was at 10 a.m.; the performance would precede the 1 p.m. kickoff.

After a two-hour postrunthrough hangout in the stadium’s green room, Norwich’s quintet tromped toward the stadium’s artificial turf, drinking in sounds and sights, including glimpses of the titanically large football players.

The Color Guard took its sideline spot after the Patriots were introduced, Michelle Brooks-Thompson sang the national anthem and fireworks went off. The guard members then had 45 seconds to take the field, a minute to stand and bask, and 45 seconds to leave and return to their starting point.

Mersing, a senior communications major, said the field seemed smaller than he’d imagined, but the stands were bigger, and packed.

“Definitely makes you think about the popularity of the sport as all of the seats were full,” he wrote in an email. “Was I still nervous? 100%. But I was prepared for this.”

“As soon as we arrived, we were quickly walked to the field so that I could administer multiple practice runs. It was extremely organized and thought out perfectly,” McConnell wrote. “There wasn't too much pressure, as I have done countless Color Guards, but as all those eyes were on me, I could feel the excitement.”

After the field moment, the guard members changed out of uniform into their street clothes and took their Patriots-provided seats. The end-of-game crush of exiting fans made leaving the stadium unruly, Edwards said, but gear was stowed,  people boarded and the bus headed home.

“It was a long day,” Edwards said. “but it was great going down and doing it.”

McConnell and Cortorreal said they’ll remember not only presenting the colors but feeling love from Norwich’s famously fervent alumni, many of whom seemed to have tickets.

“I could hear shouts of, ‘Hey! I'm Norwich Class of '75,’ or, ‘Great to see Norwich represented today!,’” McConnell wrote. “I can carry this on for the rest of my life because of how rare this opportunity comes around.”