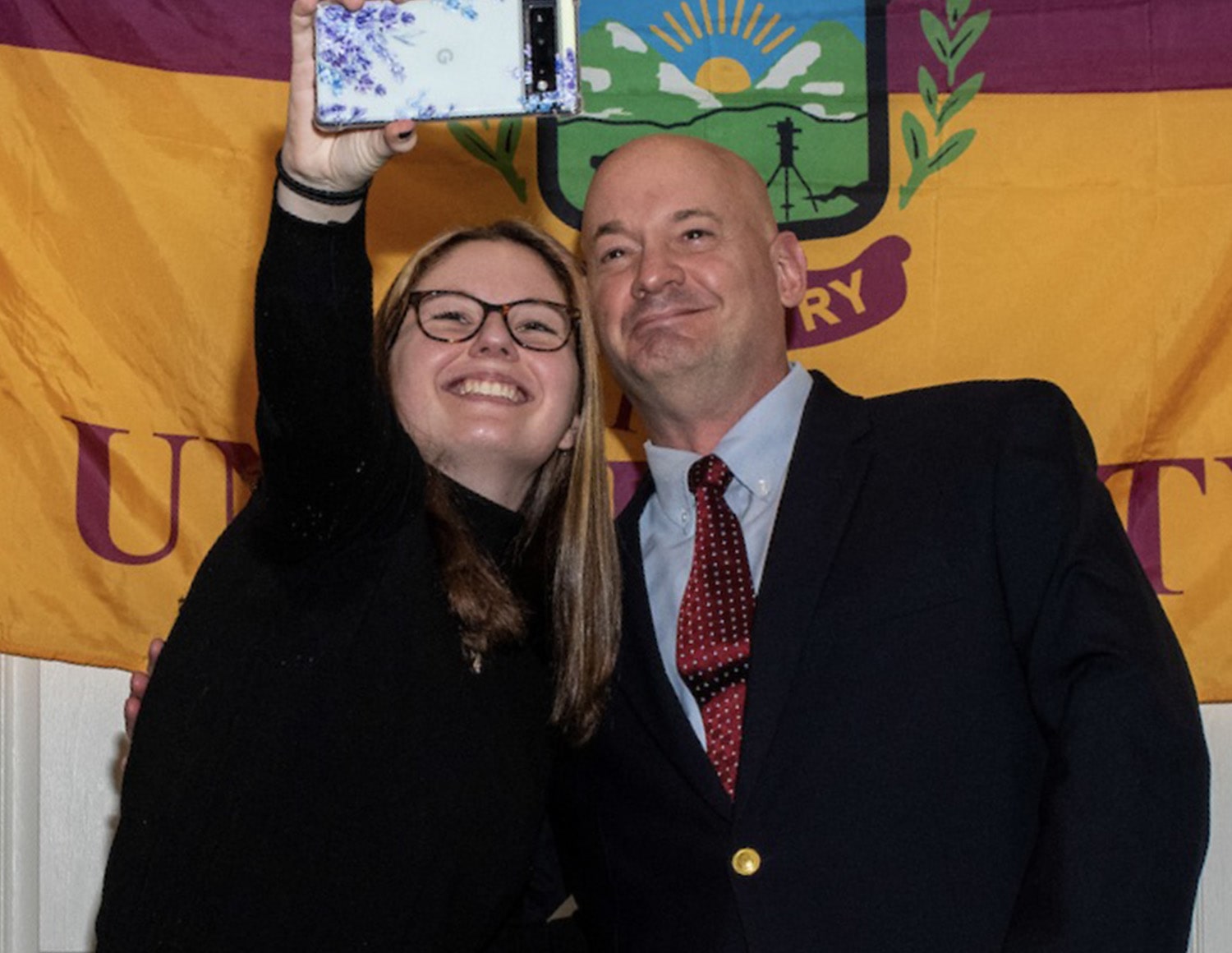 As December’s graduates ate together and celebrated the soon-to-open door to their future, Norwich University officials reminded them that the gate to past, and the Hill, remains ajar.

In a Dec. 2 dinner at the Capitol Plaza Hotel in Montpelier, Vermont, about a dozen of December’s 60 graduates, the Class of 2022’s first school-finishing group, heard from President Mark Anarumo, Senior Alumni and Family Relations Director Eddie Habeck ’99 M’10 and guest speaker George Hasselback ’97. All delivered a few laughs and several practical tips for facing challenges and leveraging networks.

Habeck, a 1999 graduate, said he learned firsthand about Norwich’s tractor-beam bonds, which drew him back to work at the university and earn his master’s (2010).

“Every decision that has been made has always been to restore as much as we can for each of you.” Norwich University President Mark Anarumo

“It’s truly remarkable,” Habeck said, “that you can travel almost anywhere in the world and you’re going to find other people that have walked around the (Upper Parade Ground) or (who) wear a Norwich ring or (who) keep a Norwich sticker in their car. They might even have a challenge coin in their pocket.”

Anarumo, who attended the dinner along with Interim Provost Dr. Stephen Fitzhugh and the Rev. William Wick, had challenge coins in his pocket, two for each graduate. One coin had a furtively placed biohazard symbol to commemorate the not-yet-over coronavirus pandemic.

As he did at the May 2021 and December 2020 commencements, Anarumo lamented what the pandemic, with its delta and omicron variants, has cost graduates.

“It hasn’t been fair,” Anarumo said. “But we tried to do the best thing for everyone, and we did it in a way that I as a parent would want someone to look after my son or daughter. … Every decision that has been made has always been to restore as much as we can for each of you.”

“We’re going to reopen all of those (social) pipelines,” Anarumo said. “And I have to do that on behalf of all of you, our graduates and families, because when you need to get a job, or you need a favor or need a friend or need a reference, to call on another Norwich graduate is profoundly powerful.”

Hasselback, an Alumni Association board member, meanwhile, described moving his family — wife, young son, two cats and six dogs — to Vermont from Saipan, a western Pacific island, in March. (His wife, Carmen, is now an administrative assistant in Norwich University’s School of Criminology and Criminal Justice.)

George Hasselback said a “Norwich Forever” moment came during a reunion. Though Hasselback had been away from campus for 15 years, Wick recognized him instantly.

Hasselback acknowledged that some people might have questioned his decision to trade tropical island life (and near-constant 75 degrees Fahrenheit weather) for oft-frigid Vermont. But he drew wisdom from winter (uncharacteristically mild as it’s been so far).

In other words, find your happiness. Life will put you in unfamiliar circumstances and strange places, Hasselback said, and your attitude will shape your spirits.

Hasselback sent the new grads away urging them to network, as Anarumo had, and to revisit campus.

“Come back and see what’s new, see what’s changed and see what’s the same … Two hundred years of history, and the good parts persist,” he said. “I pledge this to you, you’re all members of the family now, if you ever need anything, somebody’s there for you.”