With coats, a toast 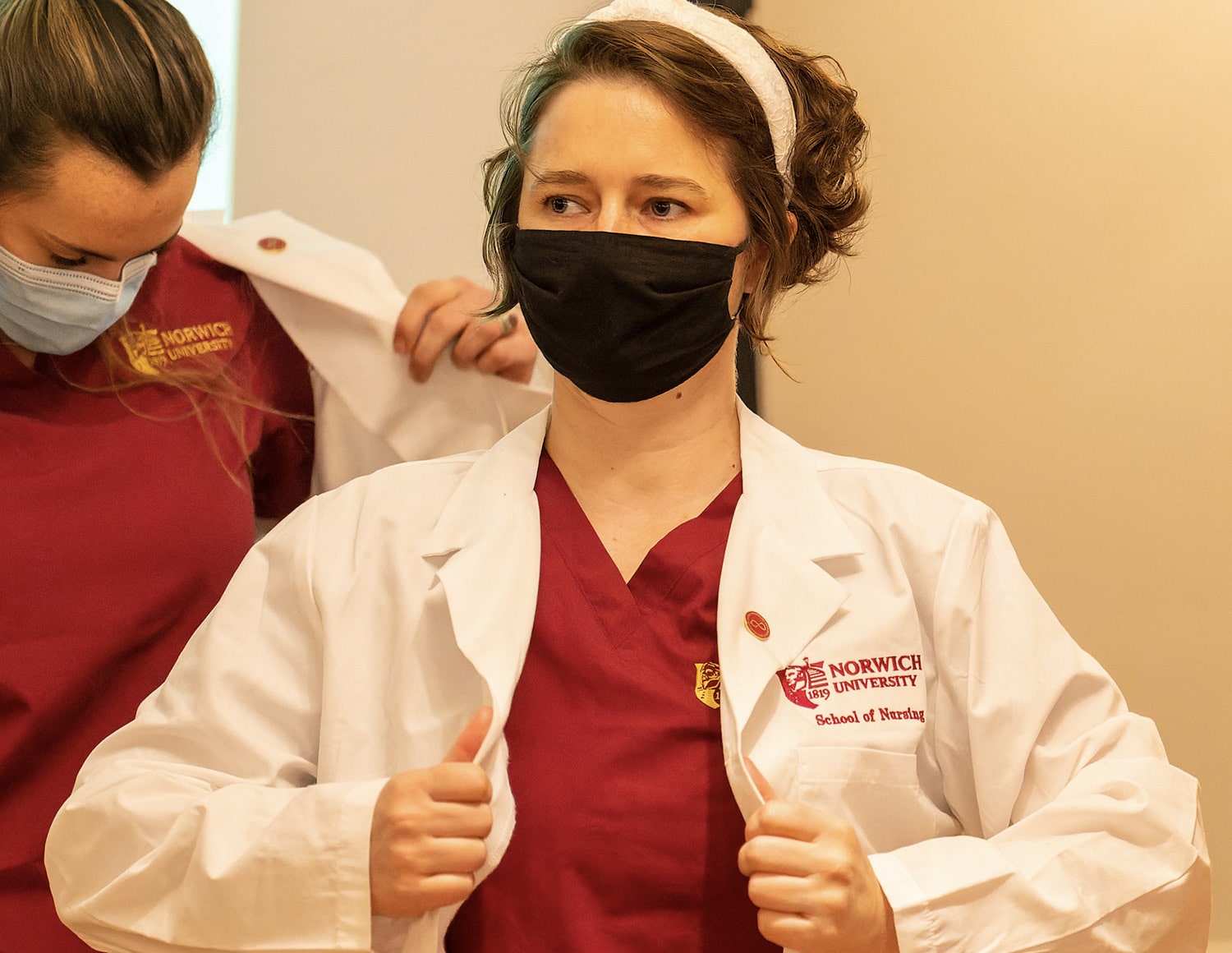 If the coat fits, wear it, even if, just this once, it’s borrowed and a little big.

Robins had put his coat by the door at home, but left without it. The nursing faculty, ever-supportive as his classmates, produced an extra.

“Once we started clinicals, it was like, ‘Oh yeah, this is it.” Christopher Willard, Norwich University nursing student

Jennifer Coutou ’99 M ’15, oncology nurse manager for the Southern Vermont Medical Center in Bennington, Vermont, delivered the keynote speech and Norwich Nursing Director Paulette Thabault gave the welcome for the ceremony, which was back in person after a year of pandemic-forced virtual presentation. The students’ families and friends formed an audience.

The White Coat ceremony, timed to coincide with the students’ first medical-surgical clinical rotations, continued an in-house tradition started in 2017, when Associate Professor of Nursing Llynne Kiernan landed a grant enabling the first one. The event also continued a larger, national tradition started in 1933 by Dr. Arnold P. Gold, a professor of clinical neurology and clinical pediatrics, at the Columbia University College of Physicians & Surgeons.

Coutou, a former Norwich Corps of Cadets member, said she entered nursing because it related to science and people, two of her passions. She said a middle school moment foreshadowed her path. After a friend grew sick at a birthday party from too much cake and goodies, Coutou accompanied her to the bathroom and held back her hair as she knelt by the toilet.

Coutou said the headlines-hogging coronavirus pandemic, now featuring the delta and omicron variants, has turned health care upside down, spreading fear and anger globally. Nevertheless, she said, nurses work stalwartly to complete duties, stay composed and protect health — their patients’ and their own.

“That’s a lot, but I’m sure each of you is up to the task,” Coutou said, later adding, “today, I challenge each of you to always keep your lamp lit by keeping humanism as the baseline of your nursing career. I challenge you to always put yourself in the person’s place in caring for them. How would you feel if you were that person in that situation?”

Ticking off the wish lists

During the postceremony reception, Glück said although she initially chose nursing for fiscal reasons, she’d realized it fulfilled her job desires — she’d work with people, use her head and solve problems. After a challenging year that included a divorce, full-time work and child care, reaching the ceremony was satisfying, she said.

Gluck’s classmate Willard, meanwhile, said he’d veered into nursing after considering becoming a physician’s assistant. Job shadowing, and working with an operating room nurse at the University of Vermont Medical Center who became his guide and mentor, showed him he’d chosen aptly.

Willard said he was excited to contemplate graduating, caring for patients and conquering imposter syndrome.

“There’s always that little voice saying, ‘You really need to think (about) how you want to make an impact on people.’ And, if that means health care, you’ve really got to focus on the person and learning how to make that human connection,” Willard said. “I’ve figured out … it’s very easy for me to talk to anybody and everybody, and the doubts have kind of dwindled away. Once we started clinicals, it was like, ‘Oh yeah, this is it.’”

At home as in the hospital, Robins focuses on others; administering to his 4- and 6-year-old children had prompted him to forget his white coat. The loaner garment, though oversized for him, exemplified Norwich’s spirit of teamwork, an armed forces hallmark that rubbed off on campus.

“The summer semester, the first time were all together, was a little like boot camp,” he said. “We’re were really drinking from the firehouse; we were thrown to the wolves, we were all part of this really intense on-ramp process. Coming through these sort of challenging situations as a group really made us cohesive.”