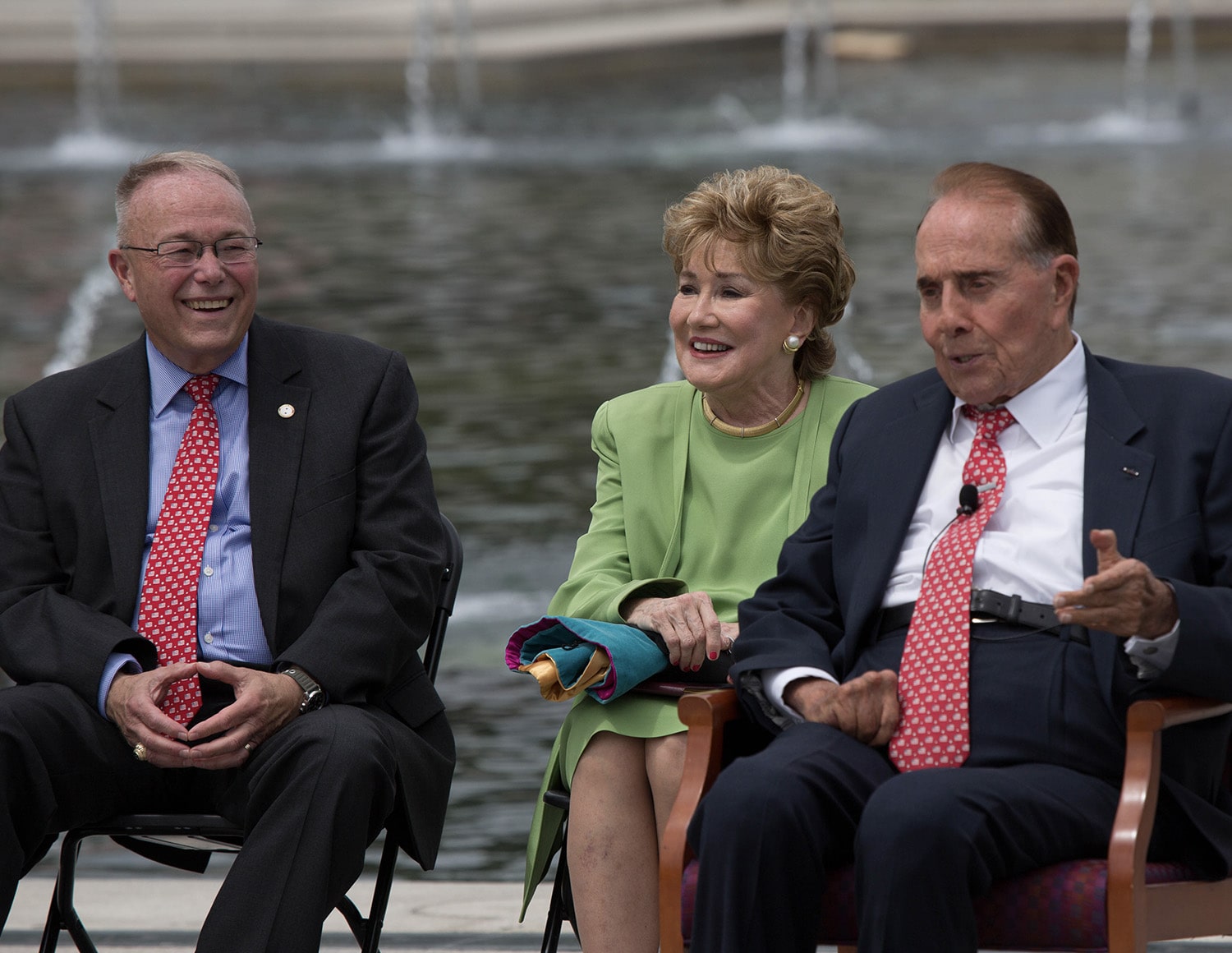 Dole, who died Sunday at age 98, had said in February that he was starting treatment for Stage 4 lung cancer. The Elizabeth Dole Foundation, which announced Dole’s death in a website announcement that was shared on social media, didn’t say where he died.

“Bob was an American statesman like few in our history, a war hero and among the greatest of the Greatest Generation,” Biden said in a statement. “And to me, he was also a friend whom I could look to for trusted guidance or a humorous line at just the right moment to settle frayed nerves.”

Dole, born Robert Joseph Dole on July 22, 1923, in Russell, Kansas, served in the U.S. Senate from 1969 to 1996, including stints as U.S. Senate Majority Leader (1985 to 1987 and 1995 to 1996.) He preceded political life by leaving college to serve in World War II. He fought as a combat infantry officer in Italy in 1944 and was severely wounded trying to save a colleague’s life. (As Time magazine reported, Dole permanently lost feeling in his right hand and arm and had numbness in part of his left hand.) He later received two Purple Hearts and a Bronze Star.

After the war. Dole finished college and attended law school on the G.I. Bill. He started his political career on the Kansas State Legislature (1951-1953), following four terms as Russell County, Kansas’ prosecuting attorney.

The degree conferral ceremony was part of the Year of Service, the first of five years counting down to the university’s 2019 bicentennial. A month earlier, Elizabeth Dole, Bob Dole’s wife and a former U.S. senator, had delivered Norwich’s Commencement speech.

On Monday, Schneider, who this year followed Dole as a Pritzker Military Museum & Library’s Citizen Soldier Award recipient, said Norwich had planned to have both senators Dole (Elizabeth was R-N.C.) visit Norwich in 2014 to receive honorary degrees. Although Elizabeth made it, Bob couldn’t, because of his health. (Dole long struggled with ailments. In 1991, he received surgery for prostate cancer, in 2001 he received abdominal aortic aneurysm surgery. He was hospitalized in 2005 after falling in his home and was treated for a leg infection in 2009.)

So, the university, made a rare off-campus degree conferral trip, asking the Doles to choose a place. The memorial, for which Dole raised money as national chairman for the World War II Memorial Campaign, was chosen. Schneider said Norwich’s Washington, D.C., alumni club helped arrange everything from seating to public address audio and that Norwich students and alumni turned out in force, joined by random memorial visitors who stayed to watch.

“It was one of the most moving things I’ve ever done and I think emotionally important,” Schneider said. “This is an honest-to-God real hero and a citizen-soldier in the best sense. … We kidded with him, saying, ‘You should have been a Norwich kid.’ We both laughed about that, and I said, ‘Now, you’re going to be one.’”

“He knew a lot of Norwich kids and had fought side by side with them in World War II,” Schneider said.

Jim Fisher ’77, said that through his 11-year tenure as executive director and ceremonies director for the Friends of the World War II Memorial, Dole visited the site every Saturday, through summer heat and winter chill, to visit World War II veterans who’d arrived on Honor Flights. Dole came even when he was ailing, in a wheelchair and flanked by his doctor, Fisher said.

“He was just a great American patriot and he had a huge heart,” Fisher, a U.S. Army veteran, said of Dole. “And he wanted to make sure that our World War II veterans were properly thanked and honored for their service to our country.”

A hat held in high esteem

“He asked, ‘Does this mean I have to report for duty on Monday morning?,’” Fisher said, adding that Dole said he later kept the hat in his bedroom in a place of honor. “When I would brief him on events coming up at the World War II Memorial, he often remarked on how that (degree conferral) day was a great day for him. So, I think Norwich had a place in his heart until the last day.”

During her 2015 Norwich Commencement address at Shapiro Field House, Elizabeth Dole lauded the university cadets’ long tradition of service and willingness to protect the United States’ fragile democracy; Benjamin Franklin said the nascent U.S. government had created, “A republic, if you can keep it.”

Elizabeth Dole told Norwich’s graduates, “You are about to embark upon the Great Crusade, toward which we have striven these many months. The eyes of the world are upon you. The hopes and prayers of liberty-loving people everywhere march with you. The world is indeed watching and eager to see how you will choose to serve.”

“I discovered that across this country, there was a quiet, untold story of profound need being overlooked ... the story of the spouses, moms and dads, siblings and other loved ones devoting their lives to caring for those who cared for us,” Elizabeth Dole said in her speech. “Therefore, when we neglect to support our caregivers, most of them so young, we also neglect our service members and veterans.”