Remember veterans’ willingness to sacrifice self for country, alumna tells cadets and campus 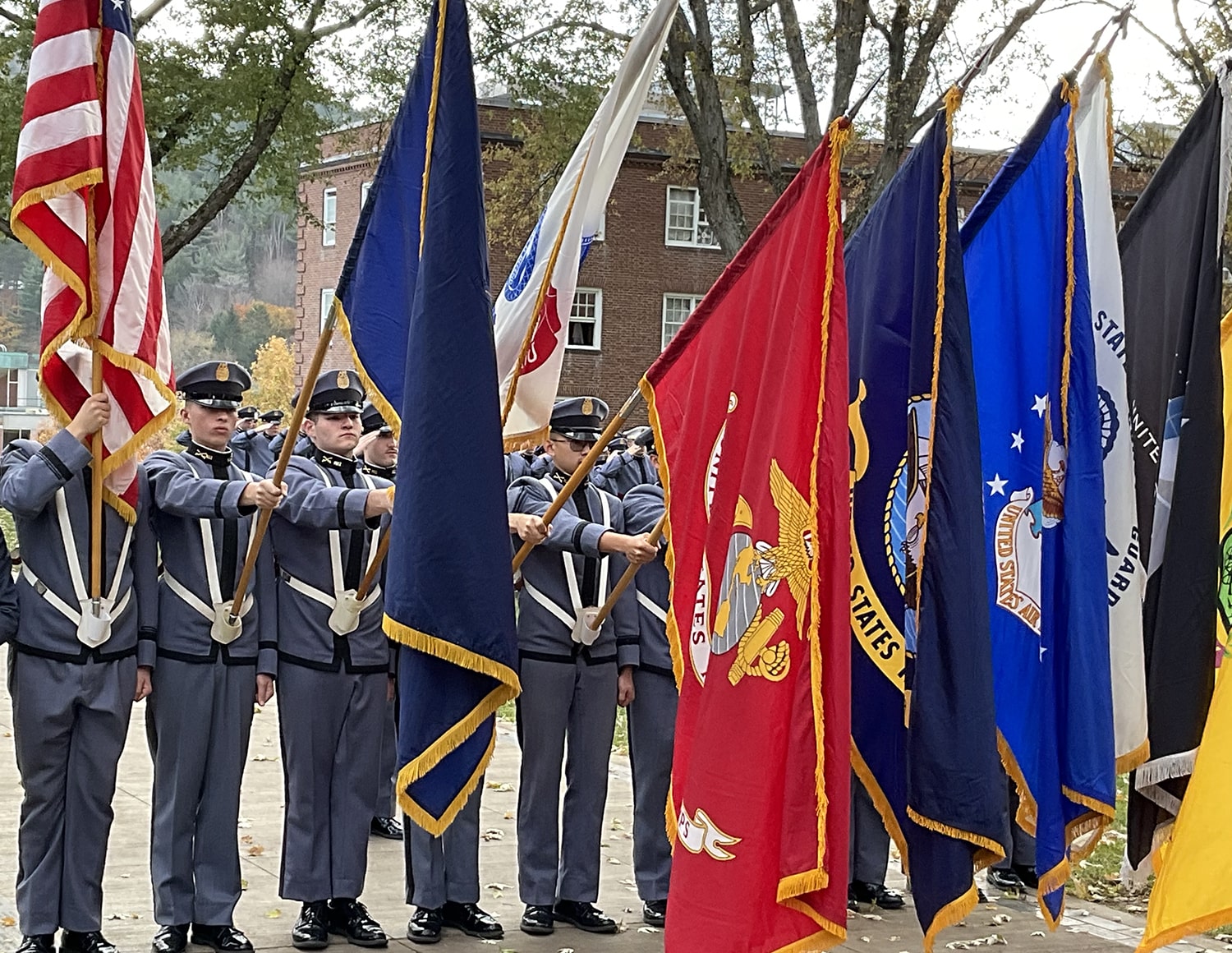 Brig. Gen. Kimberly A. Baumann returned to Norwich University on Tuesday to join the campus and community in honoring veterans and their selfless service to nation.

Baumann, the assistant adjutant general, air of the Rhode Island National Guard, and one of 78 people whose names are on the Bicentennial Stairs, spoke on the Upper Parade Ground, flanked by President Mark Anarumo and Acting Commandant William Passalacqua and greeted by the Corps of Cadets, Color Guard and Regimental Band, which performed a review with retreat.

The ceremony also included prolonged cannon fire for the Roll of Wars, a wreath laying, firing of three rifle volleys, the playing of echo taps and a visit from Ambassador Meron Reuben, consul general of Israel to New England, who was a reviewing-stand special guest.

Baumann received her commission as a distinguished graduate of the Norwich University U.S. Air Force ROTC program, graduating with a Bachelor of Science in mathematics in 1987. She has served in several leadership positions at the squadron, wing, major command and headquarters Air Force level.

She reminded the audience of the vast promise armed forces personnel make.

“A veteran is someone who wrote a blank check payable to the United States of America in an amount up to and including their life,” said Baumann, the first female Norwich Corps of Cadets member to be promoted to general officer. “From the administrators to the logisticians to those on the front lines, every service member is part of a team supporting and defending us all.”

Baumann thanked the students pursuing armed forces careers for their doing so and asked civilians watching in person and online to use military might only in emergencies, and only after exhausting peaceful, nonlethal methods — diplomacy, information and economic influence.

“On this Veterans Day, please remember to thank family members who support our veterans,” she said. “Thank them for being part of that strong home base support system that allows these service members to concentrate on their duties to protect the nation and to provide that sense of security that helps keep the peace.”

Baumann and Anarumo urged the audience to thank veterans for their service on Veterans Day and beyond. Many Norwich graduates have served, many in combat; Anarumo said their citations of valor show how they helped redirect history.

“The leadership and life experiences that veterans bring to our Norwich family is a critical foundation for our success over the past two centuries,” Anarumo said. “For that service and for their sacrifices, our nation will be forever in their debt.”