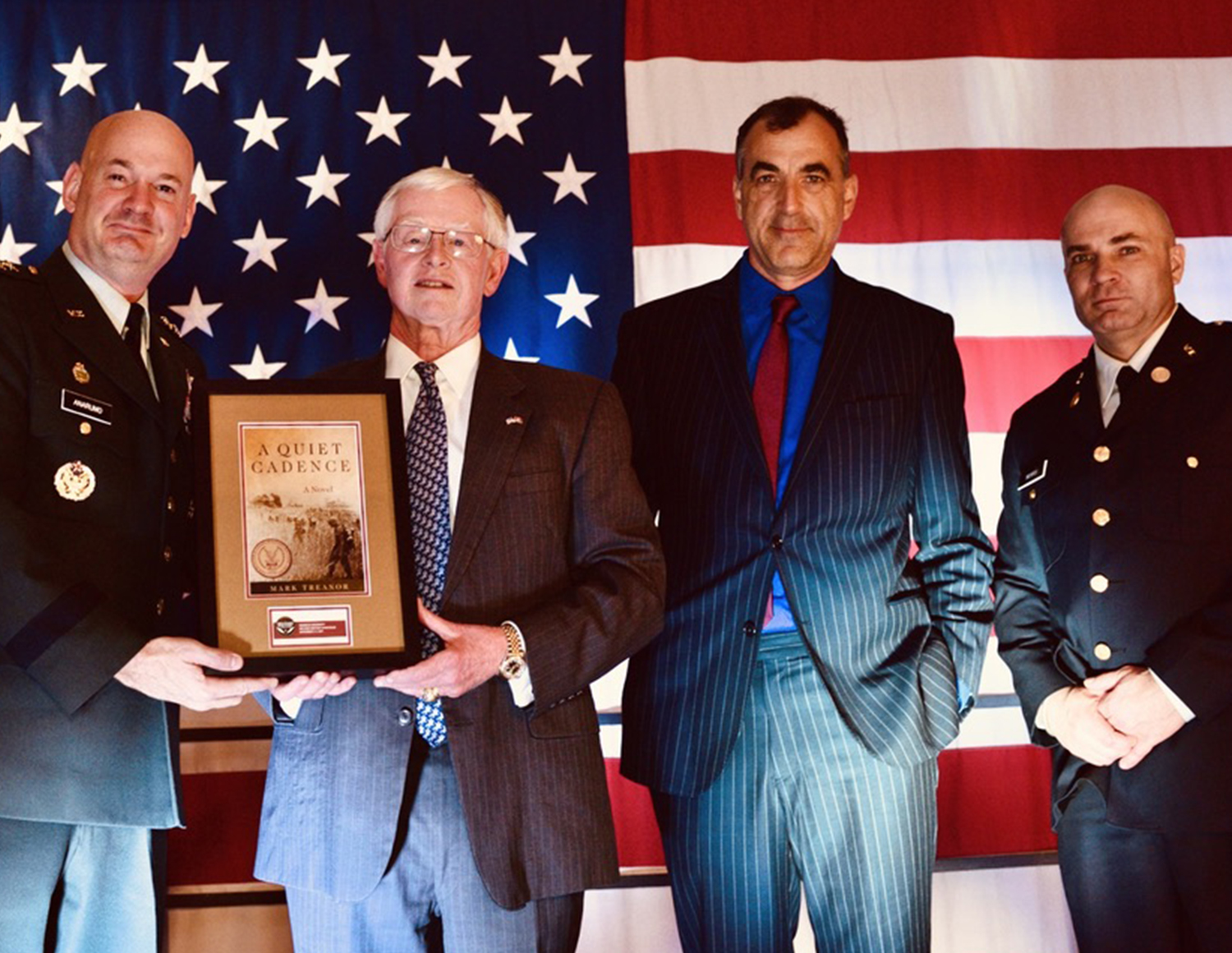 Mark Treanor and Sam Alexander knew they wanted to serve in the armed forces as children. Treanor, this year’s Colby Award winner, grew up in Rutland, Vermont, where his mother reminded him that the only piano tune he ever learned was the Marine Hymn; a box of belongings included a favorite picture book of a U.S. Marine Corps officer.

Alexander, who grew up in Fort Yukon, Alaska, as part of the Gwich’in, the most northerly indigenous people on the North American continent, told his mother at age 3 that he wanted to join the U.S. Army. She kidded him, “OK, soldier, R&R, go to bed.”

Treanor and Alexander were among the speakers at this year’s Military Writers’ Symposium, which was presented by the John and Mary Frances Patton Peace and War Center and ran Nov. 3 and Nov. 4 at Norwich University’s Mack Hall and Plumley Armory. A full slate of lectures and a panel discussion examined evolving Arctic security. Both men sat with norwich.edu for an interview Nov. 4.

“I was not going to go home and tell people I’d gotten into the Naval Academy, but I had quit. And so, I figured that they could kill me, but they weren’t going to run me out of there.”Mark Treanor, 2021 Colby Award winner, describing his time in the U.S. Naval Academy

Treanor was at the symposium to discuss his Colby Award-winning novel, “A Quiet Cadence,” which describes a young U.S. Marine who fights in the Vietnam War and later copes with the aftermath. Alexander delivered “The Cost of Arctic Security: An Indigenous Perspective.”

Treanor realized his armed forces ambitions by attending the U.S. Naval Academy in Annapolis, Maryland, and commissioning into the Marines as a 2nd lieutenant in 1968. He was a rifle platoon leader in Vietnam, an artillery battery commander and leadership instructor and later served on the boards of the National Defense University and the U.S. Naval Academy.

Alexander also realized his armed forces ambitions, graduating from the U.S. Military Academy at West Point and spending 10 years as a U.S. Army officer. He left the U.S. Army as a major in the Special Forces (Green Berets).

Alexander wryly noted that two famous cinematic Green Berets, Sylvester Stallone’s John Rambo from the 1980s “First Blood” movies, and Tom Laughlin’s Billy Jack, the titular character of a 1971 movie, were half Indian and half white, as he is. Stallone’s Rambo was famously musclebound, apparently aided in a recent iteration by human growth hormone.

But Alexander said he ran himself into form, without pharmaceutical performance enhancers. He was following a Special Forces officer’s advice to be in the best shape of his life and to not self-select. In other words, he shouldn’t tell himself he wasn’t good enough for Special Forces; the unit’s personnel would surely tell him if he wasn’t.

Alexander acknowledged the keen focus required to prepare mentally and physically for Special Forces and said he shared these lessons with Norwich cadets at the symposium.

“There’s a lot of noise out there,” he said in the joint interview. “A lot of people want your attention and time and will take it if you let them have it. Don’t let them have it for free.”

Alexander acknowledged that the smartphone-in-every-pocket culture also steals focus. He said he’s learned to protect his attention by walking in Alaska’s woods, where internet connectivity doesn’t reach, and by following the example of his parents, who astonishingly, have never been online.

Alexander said West Point was shocking at first because he’d always been around his indigenous tribe, who spoke the Athabascan language, and wasn’t prepared for a culture in which people interrupted one another frequently and questioned elders. In the tribe, he said, personal interactions were often silent and leaders’ word was the last, and often only, thing spoken.

Alexander said a Norwich cadet from South Korea asked him about adjusting to the language barrier, something he identified with, recalling how some Lower 48 idiomatic expressions initially dumbfounded him. He told her she’d adjust by involving herself in her college and other communities, although that’s been hard amid the coronavirus pandemic’s isolation.

Treanor said his biggest welcome-to-the-armed forces obstacle was physical brutality from his plebe year, the analog to Norwich’s rookdom. He said Naval Academy upperclassman could and would stop him several times a day and demand 68 pushups, reflecting his 1968 class year. Treanor said he would also have to visit an upperclassman’s room nightly, clad in two sweatsuits and raingear, to be quizzed on professional standards. Incorrect answers would yield hours of lap running.

Treanor said he was determined to continue. He thought the Marine leaders at the academy were excellent and he wanted to join them.

“I was not going to go home and tell people I’d gotten into the Naval Academy, but I had quit,” he said. “And so, I figured that they could kill me, but they weren’t going to run me out of there. I think it was a good attitude to have and it kind of carried on after that.”

Both Alexander and Treanor said armed forces experiences gave them lasting mental toughness. Alexander said he broke his pelvis in Special Forces training and, after an eight-month recovery, went to Army Ranger school, where he lost 30 pounds amid punishing training.

Rising to the top

In 2013, after his Army days, Alexander climbed Mount Denali in Alaska, North America’s highest peak, with descendants of the climbers who first scaled it in 1913. Alexander said he took a final exam for his graduate studies at Dartmouth College’s Tuck School of Business, drove his pickup truck from New Hampshire (Dartmouth is in Hanover) to Alaska, and joined the climb with little preparation. Others had trained all year for the climb; he’d had a single backpacking trip.

“I was like, ‘I’ll get in shape on my walk up to the mountain.’ And then I’ll do the climb, and I’ll be fine.” Alexander said. “And I was. I made it to the top; some of them didn’t. … They were younger than me and in better shape, but I was like, ‘That doesn’t matter.’ Because I knew I was tougher than they were.”

Treanor, too, said his Naval Academy-forged mental stamina helped him scale a major peak. He climbed Mount Kilimanjaro in Tanzania when he was 61 and his youngest son was 18, freshly graduated from high school.

Both Treanor and Alexander said they told Norwich cadets at the symposium that they can achieve with persistence. Treanor said he assured a prospective Marine who fell a minute short of his fitness test run time that training will close the gap.

Both men also said the best leaders listen hard and direct quietly, substituting example setting for blustery bravado. Treanor said the person at the end of the table, saying little and absorbing much, probably will lead effectively. Alexander remembered his Special Forces team sergeant, Petter Jacobsen, saying, “You talk, you teach, you listen you learn.”

Jacobsen received the Silver Star, the Army’s third-highest award for valor in combat, in November 2007 for heroism in Iraq earlier that year.

“This guy could fight, absolute just warrior. He’d been in a running gun battle and been shot six, seven times and just kept fighting. He’d gotten shot in the right arm and switched to his left arm to start shooting his pistol,” Alexander said. “(But) he was a very humble guy; he would never tell you about it. … He was telling me you’ve got to listen, you don’t always have to agree, but you’ve got to listen, and you need to take care of people.”