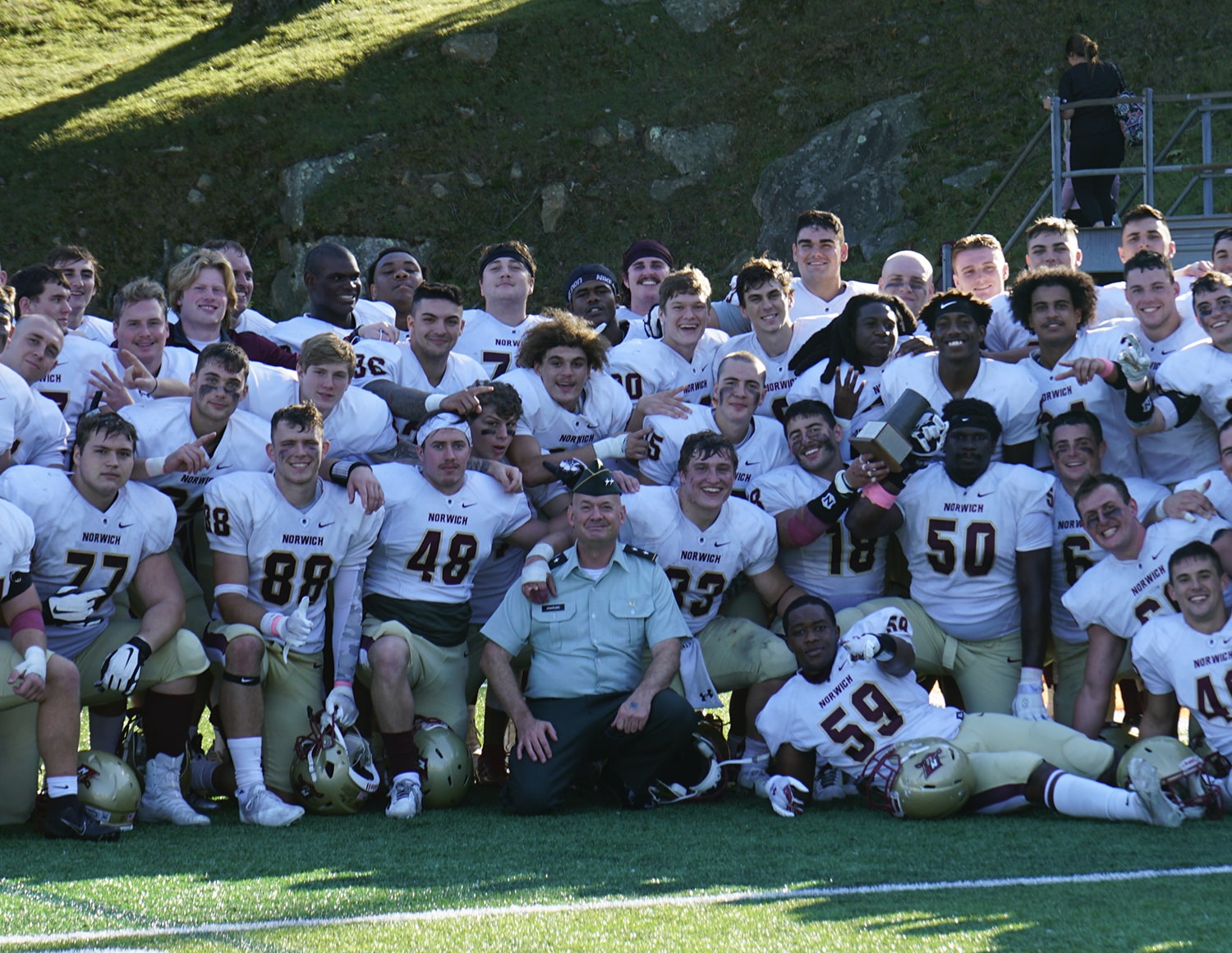 Norwich University's football team hung with Catholic University of America in Saturday’s first half before falling 35-14 in Washington, D.C., Saturday in the Cadets’ 2021 season-closer.

Norwich’s season included wins in two trophy games — the Maple Sap Bucket game Sept. 18 against Castleton University and the “Mug Game” aka the “Little Army-Navy Game” on Oct. 2 against the U.S. Coast Guard Academy. Both were road wins.

Norwich’s season included wins in two trophy games, both on the road — the Maple Sap Bucket game Sept. 18 against Castleton University and the “Mug Game” aka the “Little Army-Navy Game” on Oct. 2 against the U.S. Coast Guard Academy.

On Saturday, quarterback Owen Trudeau came off the Cadets bench to complete eight of 13 passes for 79 yards and a touchdown. Sophomore running back Jehric Hackney had a team-high 144 yards on 26 carries and a touchdown. Nate Parady had 39 yards in 15 carries and finished the season with a team-leading 442 yards rushing.

Chase caught five passes for 48 yards and, including one for 25 yards and touchdown from Trudeau. He finished the season with 19 receiving touchdowns, just three behind Beau Almodobar ’84’s 22.

Chase also led the team in receiving yards for the season with 781.

Motew had seven tackles Saturday and finished the season with a team-high 95. On Saturday, Junior linebacker Patrick Keefe had six tackles and a quarterback sack; junior linebacker Joseph Bornes intercepted one pass and broke up another.

Norwich finished (1-5 in the New England Women’s and Men’s Athletic Conference and 2-8 overall).

Catholic (6-3, 4-1 NEWMAC) won its fifth out of six home games this season and will play Springfield for the New England Women’s and Men’s Athletic Conference championship on Saturday. The Cardinals used a 21-0 third-quarter run to put the game out of Norwich’s reach.

Catholic senior receivers Mark Cheffers and Preston Jeffrey each had 100 yards receiving for the game.