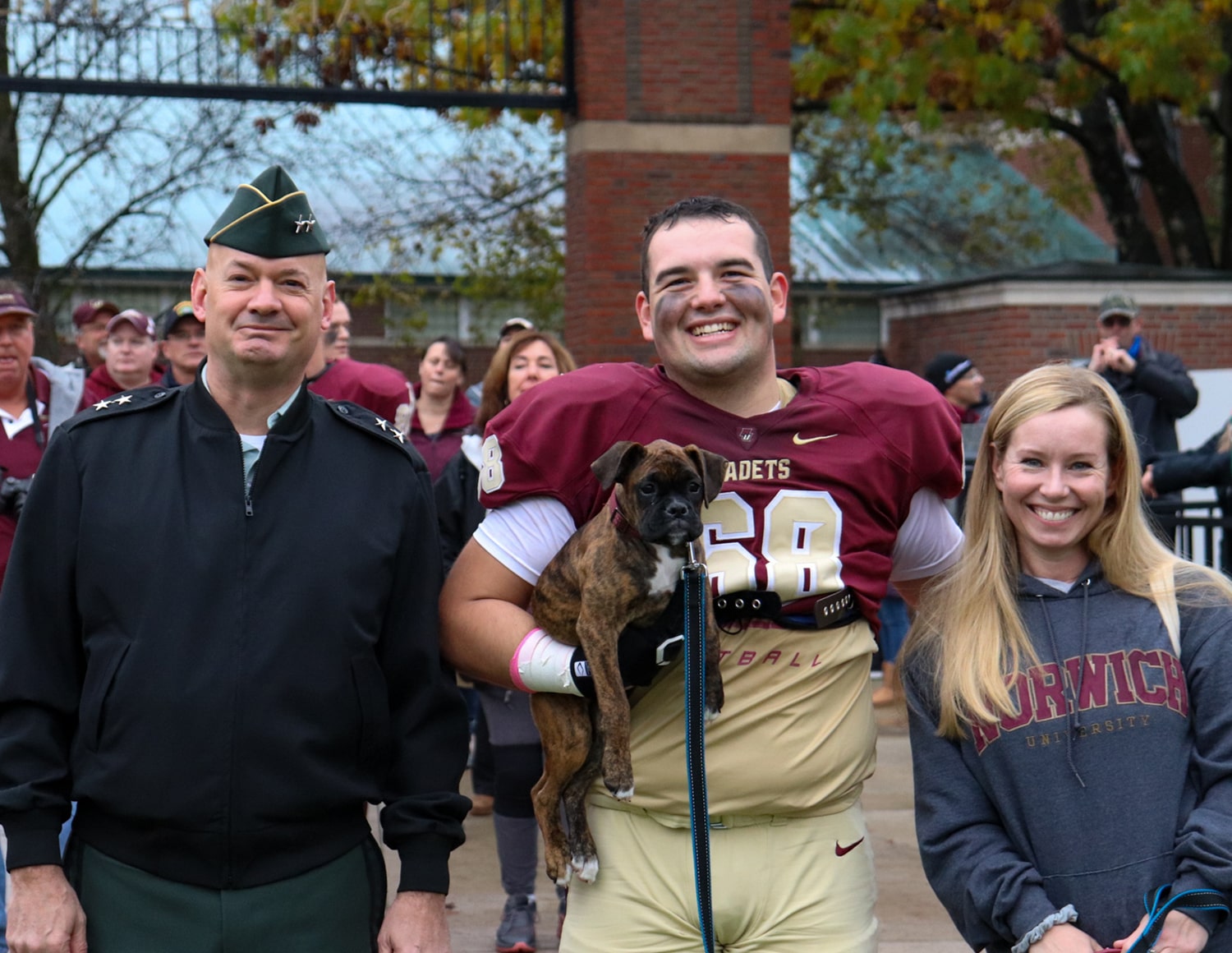 On the football team’s Senior Day on Sabine Field at Haynes Family Stadium, President Mark Anarumo escorted Panza, a center on Norwich’s offensive line, onto the field when Panza’s mother couldn’t make the trip from Moorpark, California, near Los Angeles.

“You have continually fostered a culture of family among students, athletes, and our community at Norwich.” Norwich senior football player Chase Panza in a letter to President Mark Anarumo

Panza, who is a 2nd lieutenant in the Corps of Cadets, is majoring in criminal justice and, according to his Norwich Athletics online profile, aspires to an FBI career. In an email, Panza thanked Anarumo for his leadership.

“You have continually fostered a culture of family among students, athletes, and our community at Norwich and I could not think of anybody better to try and ask,” Panza wrote.

At halftime of the football game, in a 50-yard-line ceremony, New England Men’s and Women’s Athletic Conference Executive Director Patrick Summers awarded a crystal football trophy to Norwich Athletic Director Tony Mariano in thanks for his helping establish the conference’s football and for years of service to Norwich University.

Mariano will retire after 44 years at Norwich when sports schedules complete in the spring.

Maine Maritime discontinued football in August 2020. On June 23, the NEWMAC said it will add Maritime College, part of the State University of New York system, for football on July 1, 2023. The Privateers competed in the Eastern Collegiate Football Conference, its home since 2009, in 2021 and will continue to do so in 2022.

“Tony was an instrumental leader in the establishment and success of NEWMAC football, and for that we are very grateful,” the Rev. William Wick said over the public address system to cheers and applause. “On behalf of the current NEWMAC members … we honor and congratulate Tony for his long impact for us all, his hard work, dedication and commitment to NCAA Division III football.”

Hopkins works as a packager at Darn Tough Vermont, a Northfield, Vermont company, that donated 1,500 pairs of socks for fans to throw onto the ice after Norwich scored its first goal of the night.

The socks will be donated to four Vermont nonprofits, The Veterans’ Place in Northfield, Trinity United Methodist Church in Montpelier, Montpelier Food Pantry and the Committee on Temporary Shelter in Burlington. (Other socks were collected at the Wise Campus Center and a Northfield Savings Bank branch in Northfield.)

The men’s soccer team advanced to the Great Northeast Athletic Conference semifinals by topping Emmanuel College 5-4 in penalty kicks. (Regulation and overtime had produced a 3-3 tie.)