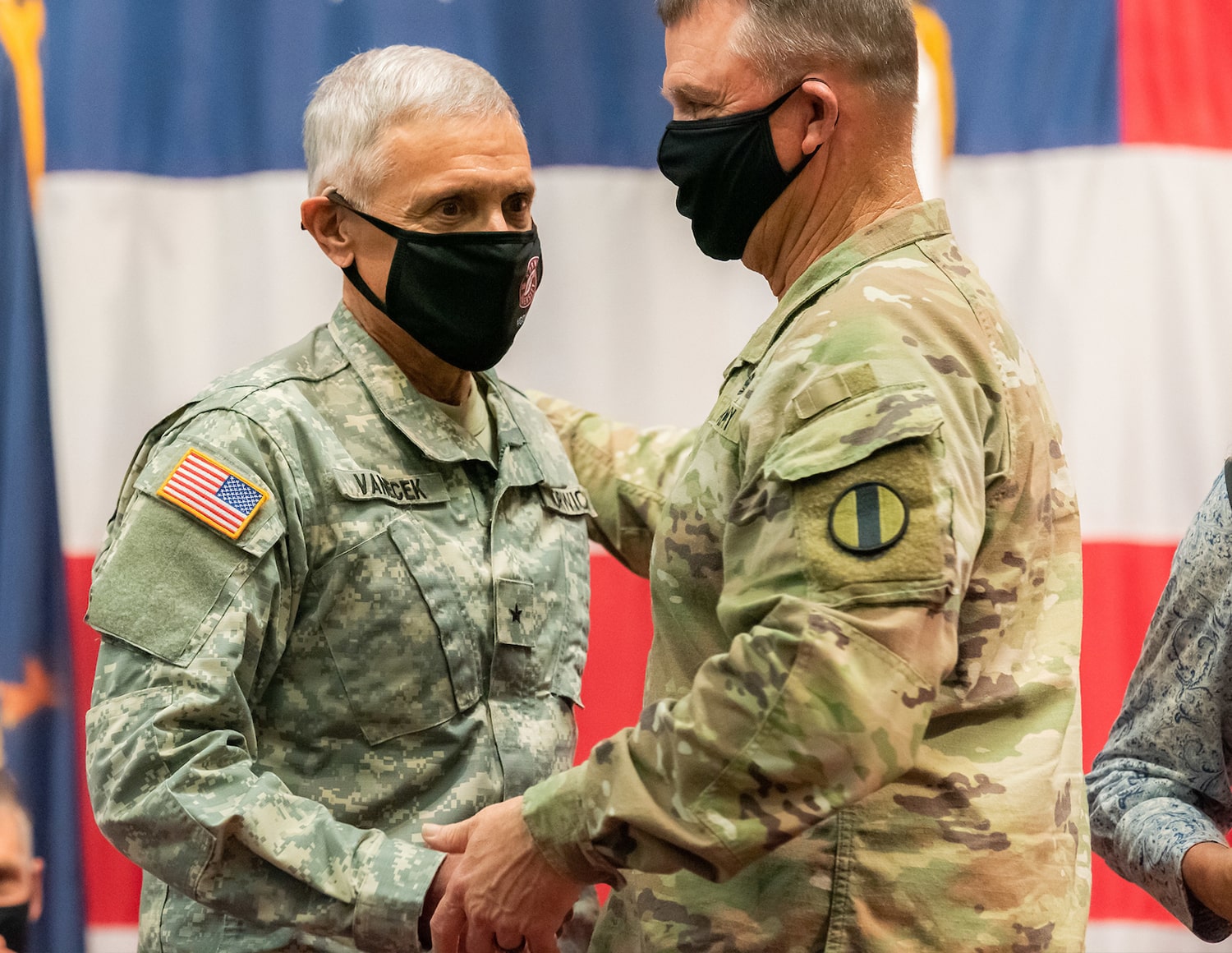 Norwich and its Pioneer Battalion won the award for “exceptional performance” in academic year 2019-20 and followed its winning of the Gen. Douglas MacArthur Award for the Cadet Command’s 1st Brigade, also for 2019-20. (Norwich also won the MacArthur Award in 2013-14.)

Before the eagle-winged Defense Department Award trophy changed hands, Norwich President Mark Anarumo invited Senior Vice President of Student Affairs and Technology Frank Vanecek, his wife, Diane and his daughter U.S. Army Maj. Jennifer Vanecek Bales, onstage to thank them for decades of service to the university. Vanecek, who was a longtime computer science professor before he joined the administration, has worked at Norwich for 45 years.

“Frank and I were talking about service and we talked about our backgrounds, and he expressed frustration about not being on active duty,” said Anarumo, who served in both the U.S. Army and U.S. Air Force. “And I said, ‘My God, Frank, you have generated more for the national defense and uniformed services of this country than 90% of the people I met on active duty.’”

The audience amplified Anarumo’s gratitude, rising to its feet and whooping and applauding thunderously. It was the second bow for Bales, whom Funk had praised before his remarks. (Bales, a 2012 Norwich graduate, serves as his special assistant at the U.S. Army Training and Doctrine Command.)

Funk, meanwhile, called senior Sarah Glidden, the campus’s top-performing Army ROTC student, onstage to explain why she serves. College of National Service Dean and U.S. Army Col. Joel Newsom said Glidden’s ranking is based on a whole-person concept consisting of academic performance; leadership performance both on campus and during Cadet Summer Training at Fort Knox, Kentucky; physical fitness; and involvement within the university on and off-campus. Glidden, a nursing major, has a cumulative 3.82 academic GPA and a 4.0 military science GPA.

“You warned me about this,” Glidden said as she reached the lectern. “I thought you were joking.”

Even if he didn’t joke, Funk beamed buoyant positivity. He encouraged the cadets to get up, dust themselves off and try anew when they failed. (Failure is success turned inside out, he said.) He also advised the leaders, working in their followers’ interests, to seek the highest-ranking officer for answers to challenges. Don’t stop, he said, until you get to a commander.

Funk said he and his family have always believed in the U.S. Army, having served a collective 103 years, bolstered by capable leaders and excellent friends. He encouraged the cadets to seize their own opportunities.

“To succeed in our force, you need probably the single most important trait of any leader, I believe that to be tenacity, the fixed resolve not to quit,” Funk said. “You have that opportunity.”