Wearing the ‘jersey of the greatest team on Earth’ 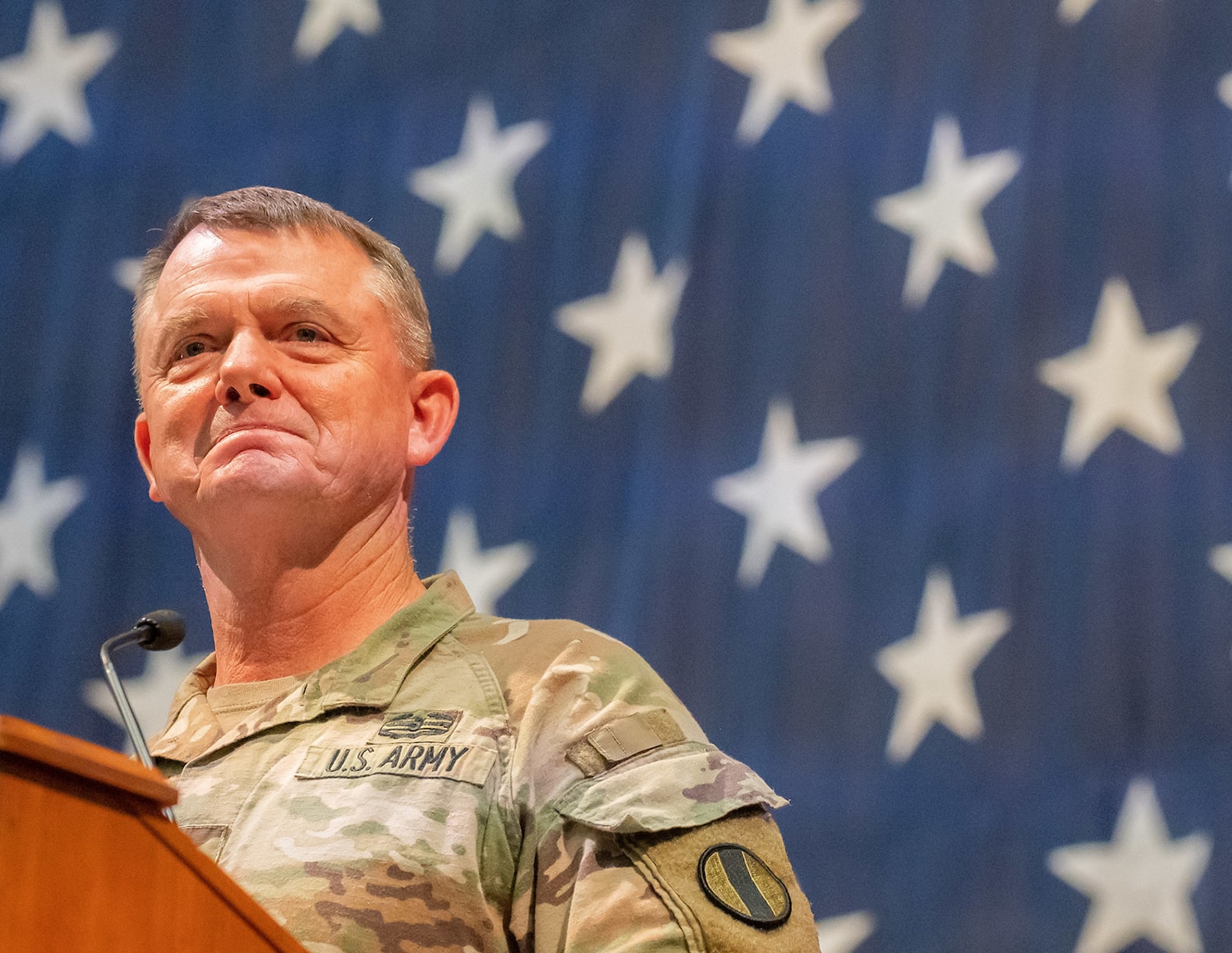 Funk, the  U.S. Training and Doctrine Command commander who this month joined his father in the Army ROTC Hall of Fame, visited Shapiro Field House on Oct. 19 to bestow the Defense Department ROTC and Educational Institution Partnership Excellence Award for “exceptional performance” in the academic year 2019-20. The award, delivered at Shapiro Field House, is the Norwich Army ROTC unit’s second major award for 2019-20, following the Gen. Douglas MacArthur Award.

For the Corps of Cadets, which had marched down to musical accompaniment by the Regimental Band, Funk displayed “Funk’s Fundamentals,” bullet-pointed wisdom to live and lead by. He also said the cadets wear the cloth of the greatest nation on Earth.

“That great cloth that you wear means two things around the globe, hope and fear, and they’re in equal measure,” said Funk, who with his father are the only father-son Army ROTC Hall-of-Famers. “You see, it’s hope for those that are downtrodden, those that need a change, those that need an opportunity, those who need a despot destroyed, those who demand something more.”

America’s enemies fear those uniforms, Funk said, because they know the people wearing them have the determination, grit, aptitude, technology and ability to tackle any challenge. The U.S. Joint Force is incredible, Funk said, but not for machines or technology, but for people who lead and serve selflessly.

Service goes beyond uniforms, Funk said; it simply means people have made other people’s interests their own. Americans need to lead from wherever they are, Funk said,  guiding and counseling those who request it, changing the human condition; the world expects this.

“You, the men and women of the Joint Force, you those who are willing to be … in civil service, those that will be on the front lines in a fight against the pandemic, in a fight against injustice, in a fight for change, it is you who will lead our nation now,” Funk said. “I have shared your time … some of you I have known since you were very, very young. And I will tell you, our nation is in very good hands. You are what’s right with our nation.”

Service has moved America forward, Funk said, and service will be required and expected of Americans continually. He asked the students to remember three words: be, know and do. Be the leaders you want to be led by, he said, know the people you are serving with and for, their origins, their families, their motivation for serving.

Then, Funk said, do the right things the right way.

“You have the opportunity to believe in yourself, be confident but humble and kind, and be receptive to constructive criticism,” Funk said. “You see, you don’t have to be perfect. It’s OK to fail, but as Teddy Roosevelt said, ‘If you’re going to fail, fail while daring greatly.’ Get  up, dust yourself off and try it again.”

In leading the nation, armed forces leaders will have highs and lows, but, Funk said, as people who deal in life and death and lead beloved sons and daughters. People in uniform, wearing the “jersey of the greatest team on Earth” he said, have a responsibility to leave things better than they found them every day.

“Just remember, somewhere, someplace, some young man or woman in an American uniform is standing on a cold, lonely post to preserve our freedom,” he said. “That’s what you do.”