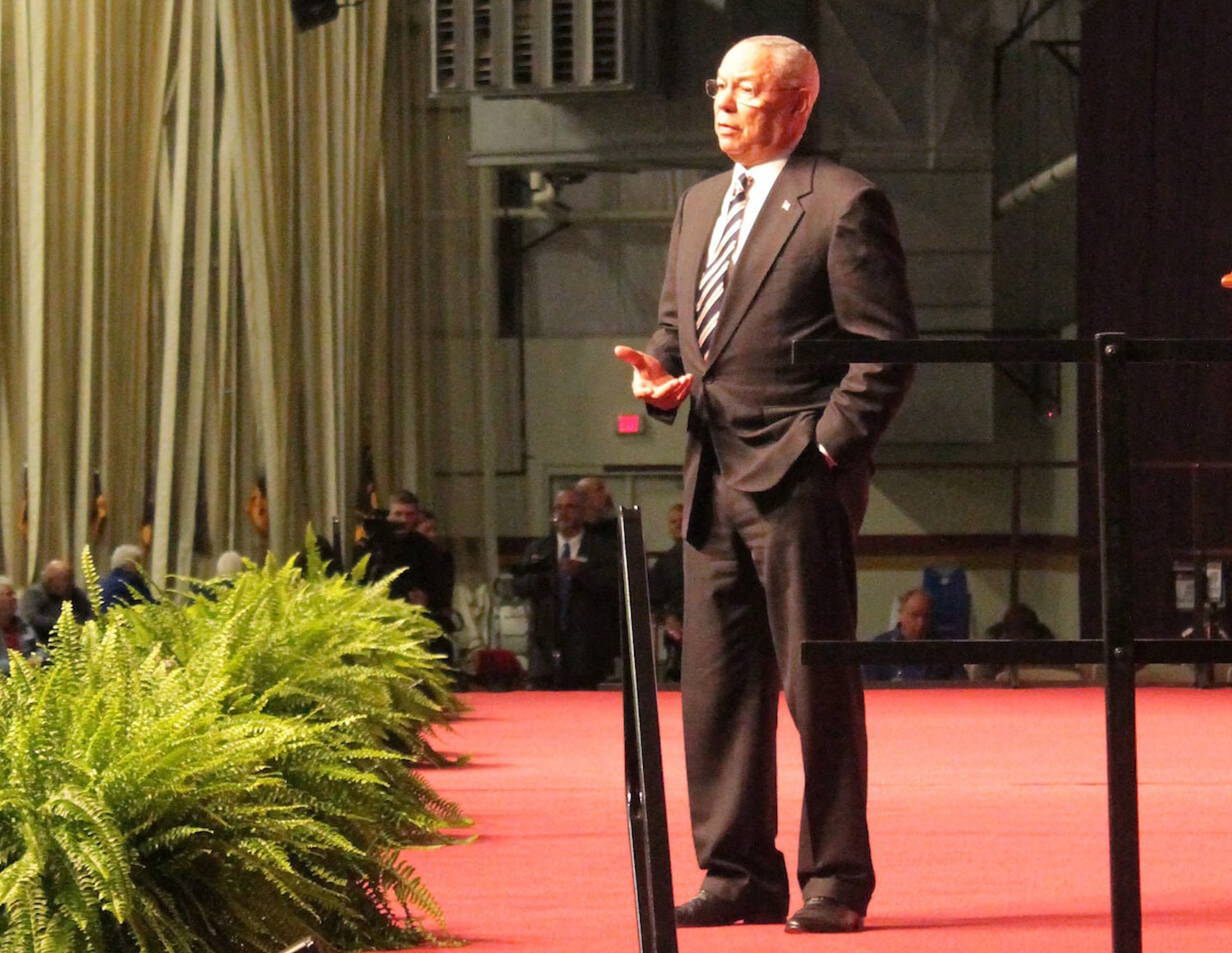 In addresses to students and university community, four-star generals spoke on leadership and service

Powell, who spoke at Norwich’s Shapiro Field House during Veterans Day 2014, died Monday at age 84. In a statement, Powell’s family said he died from COVID-19 complications. The family added that Powell died after treatment at Walter Reed National Military Medical Center in Bethesda, Maryland. As Mother Jones magazine reported, though Powell was vaccinated, he was severely immunocompromised, suffering from multiple myeloma, an immune-system-weakening blood cancer.

Colin Powell, a close friend of Gordon R. Sullivan ’59, the U.S. Army’s 32nd chief of staff, was the first Black Joint Chiefs chairman and the first Black secretary of state.

Powell, a close friend of Gordon R. Sullivan ’59, the U.S. Army’s 32nd chief of staff, was the first Black Joint Chiefs chairman (and the youngest), and the first Black secretary of state. President George W. Bush named Powell to the latter post in 2000.

The New York Times reported that Powell’s straightforwardness and sometimes blunt-speaking leadership made him “the most popular public figure in America” when he retired from the military in 1993. In an interview with now-Norwich Record Editor-in-Chief Sean Markey, Powell described what the observers called the “Powell doctrine” for military operations: identify clear goals, gather public support and use decisive, overwhelming force to defeat enemy combatants.

“What objective are we trying to accomplish? And can we accomplish it without war?,” Powell said. “If the answer is ‘no,’ we tried, it didn’t work — now you need to use force. Then let’s use it. But don’t use it until you have a clear understanding of what we’re trying to achieve.”

Powell, who served 35 years in the U.S. Army, also told the Record that leaders should learn to mind their people and lead where they are.

At Norwich, Powell, as part of the Todd Lecture Series, spoke to a crowd of more than 3,000 people. He spent about 90 minutes describing experiences in the military, high-level Washington, D.C., government and civilian life.

ROTC, which Norwich launched, not only commissions armed forces officers but develops leaders, Powell said. He recalled joining ROTC while attending City College in New York and described himself and Sullivan as two ROTC kids who made it good.

“I like to kid my West Point friends, I know you thought we were just Christmas help, but look at us now,” he said. “(ROTC is) a way of putting structure in the lives of young men and women and showing them how to serve and what personal confidence is about.”

In its story about the speech, the nonprofit news website VT Digger reported Powell saying that money, gerrymandering and meddling media were corroding politics and stymying policy decisions for education, the environment, the economy, infrastructure, and immigration reform. He urged the audience to encourage others to become “deeply involved” in politics and vote, guided by their conscience.

“Stop believing in those who don’t seem to believe in what this country is about,” Powell said.

On Monday, Norwich University President Mark Anarumo remembered Powell as a great American leader who influenced how he leads.

“What I learned from him was about expecting high performance while holding people accountable but to develop those who might need the extra touch,” Anarumo told Burlington, Vermont, television station WVNY-TV/WFFF-TV, Channel 22/44. “He was able to speak with such clarity and authority but alwways maintain that humility. You never felt like he was going to talk down to you or treat you harshly.”

Odierno, a Rockaway, New Jersey, native, served more than 40 years in the armed forces after graduating from the U.S. Military Academy at West Point and the Army War College.

In 2008, Odierno succeeded U.S. Army Gen. David Petraeus as the top commander of the multinational force fighting in Iraq. Overall, the Times reported, Odierno helped thwart sectarian killings and increase stability in Iraq with the troop surge. He retired from the Army in 2015 to become senior adviser at JPMorgan Chase & Co.

At Norwich’s 2016 commencement, Odierno spoke to more than 4,000 people, noting that he had many friends and armed forces colleagues who’d graduated from the university. He noted that Norwich had produced more than 100 general and flag officers who influenced the armed forces, including Sullivan, and valuably integrated military and civilian students.

Odierno said there’s no greater gift than selfless service to better humankind. He urged the audience to dedicate themselves to service, whether through military commissions or careers as teachers, healers, civil servants or volunteers.

“He could have had any job, he could have made any amount of money but, to him, service was more important,” Odierno said of Sullivan. “Take that example. Give back. Give to others. Make a difference in other people’s lives. That’s what your legacy will be once you graduate.”

He urged students to choose the harder right over the easier wrong and build on previous generations’ successes and sacrifices.

“I emphatically suggest that … every one of us is defined by character. Your character will be tested and it will be the most important test you will ever take,” he said. “Remember to always treat all with dignity and respect. This will allow you to carry on and accomplish anything that you aspire to accomplish.”