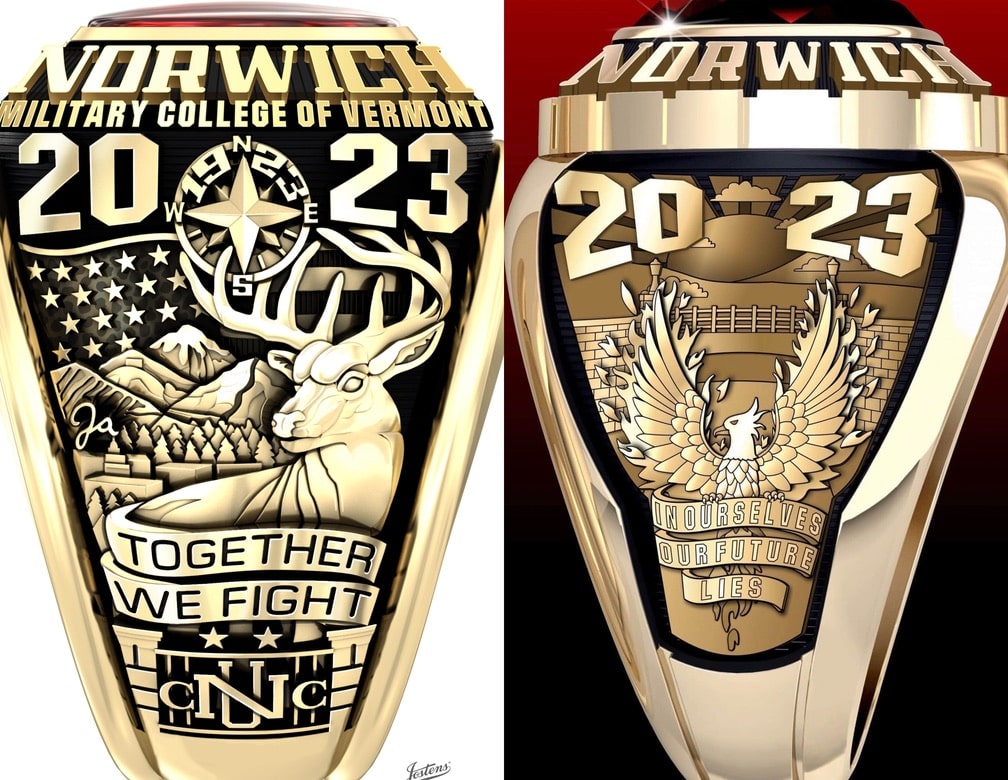 Norwich University’s ring tradition marks its centennial with the Class of 2023, and Tuesday a rite for the rite — ring reveals — returned in person after a COVID-19 hiatus. (Rite makes rite, right?)

The Corps of Cadets revealed its 2023 class ring design in a Tuesday ceremony at Plumley Armory. The civilian students displayed their ring design for several hours Tuesday in the Wise Campus Center “fishbowl” lounge.

“We wanted something to represent COVID, because of how difficult it was for us, how it was unexpected and a challenge.” Renata De Paiva, Civilian Ring Committee, class of 2023

The 2023 civilian ring design includes images of campus’s Class of 1959 Bridge, symbolic for connecting Corps students with their civilian counterparts, and two images of COVID-19 resilience — a phoenix rising from the pandemic’s proverbial ashes and clouds passing as the pandemic’s peak (and related restrictions and in-room quarantines) passed. There’s also a quote from the rings received by the 2023 students’ Guardian Class, 1973, “In ourselves our future lies,” reflecting personal individuality and collective I Will Try spirit.

Nolan Bohac, a Class of 2023 civilian student studying cybersecurity and information assurance was talking rings at the campus center Tuesday with classmate Renata De Paiva, a member of the Class of 2023 Civilian Ring Committee.

Bohac said he’d heard rumors about how the ring would look, but was pleasantly surprised by the final design. De Paiva said some students were surprised that the phoenix wasn’t an eagle.

“We wanted something to represent COVID, because of how difficult it was for us, how it was unexpected and a challenge,” said De Paiva, a computer science major from Brazil. “At first, we had a biohazard symbol, but that was a little too much, so we changed it to the clouds … which were blocking the sunlight for a bit but were going to go away. The phoenix is like a new life … starting over.”

The 2023 Corps of Cadets ring, meanwhile, prominently features a compass rose with 1923 in it, signifying the tradition’s centennial and the class’s many hailing places and future directions. The class’s ring description noted that the compass fit particularly after the coronavirus pandemic scattered students in 2020 and 2021.

The design also features a deer, (also on Vermont National Guard uniform patches), to represent Vermont’s pristine nature and divine tranquility. The deer’s antlers have five points, one for each rook company, and symbolize regeneration and change. As they mature, deer shed their antlers and grew new ones.

The 2023 Corps ring features the initials “J.A.” for James C. “Jack” Abare ’57, who for decades hosted the Rook Dining Out picnic at the Northfield, Vermont, farm. The 2023 rook class was the last to attend Rook Dining Out before Abare died in February 2020. The ring also has two stars, one each for now-President Emeritus Richard W. Schneider and current President Mark Anarumo.

Allison Sturgeon, a criminal justice major contracted with the U.S. Marine Corps, said she and her fellow Corps Ring Committee members weren’t sure how their classmates would receive the deer image. But Tuesday night’s reaction, she said, was electric and positive.

“It was an explosion of emotion and excitement,” Sturgeon said. “People were jumping up and down … cheering, hugging each other. One kid even put his hand over his mouth, he was so, like, ‘Oh my gosh.’”

“It was an explosion of emotion and excitement,” Sturgeon said. “People were jumping up and down … cheering, hugging each other.” Allison Sturgeon, Corps of Cadets Ring Committee, Class of 2023

Juliana Paddock, another Corps Ring Committee member with a dual criminal justice-psychology major and U.S. Army ROTC member said a special video projected before the reveal had a countdown clock and a bouncing spotlight. The light shifted around the design, revealing different areas, before settling to reveal everything.

“People were ecstatic,” she said, describing her classmates’ reaction. “It was really cool just to share that with everyone.”

Gathering to celebrate the ring was as satisfying as revealing it was exciting, Sturgeon said.

“It was a really good thing for us, just coming off COVID and still dealing with masks and everything,”  Sturgeon added, “It was a good night, it was a sense of normalcy and going back to what it used to be like before.”