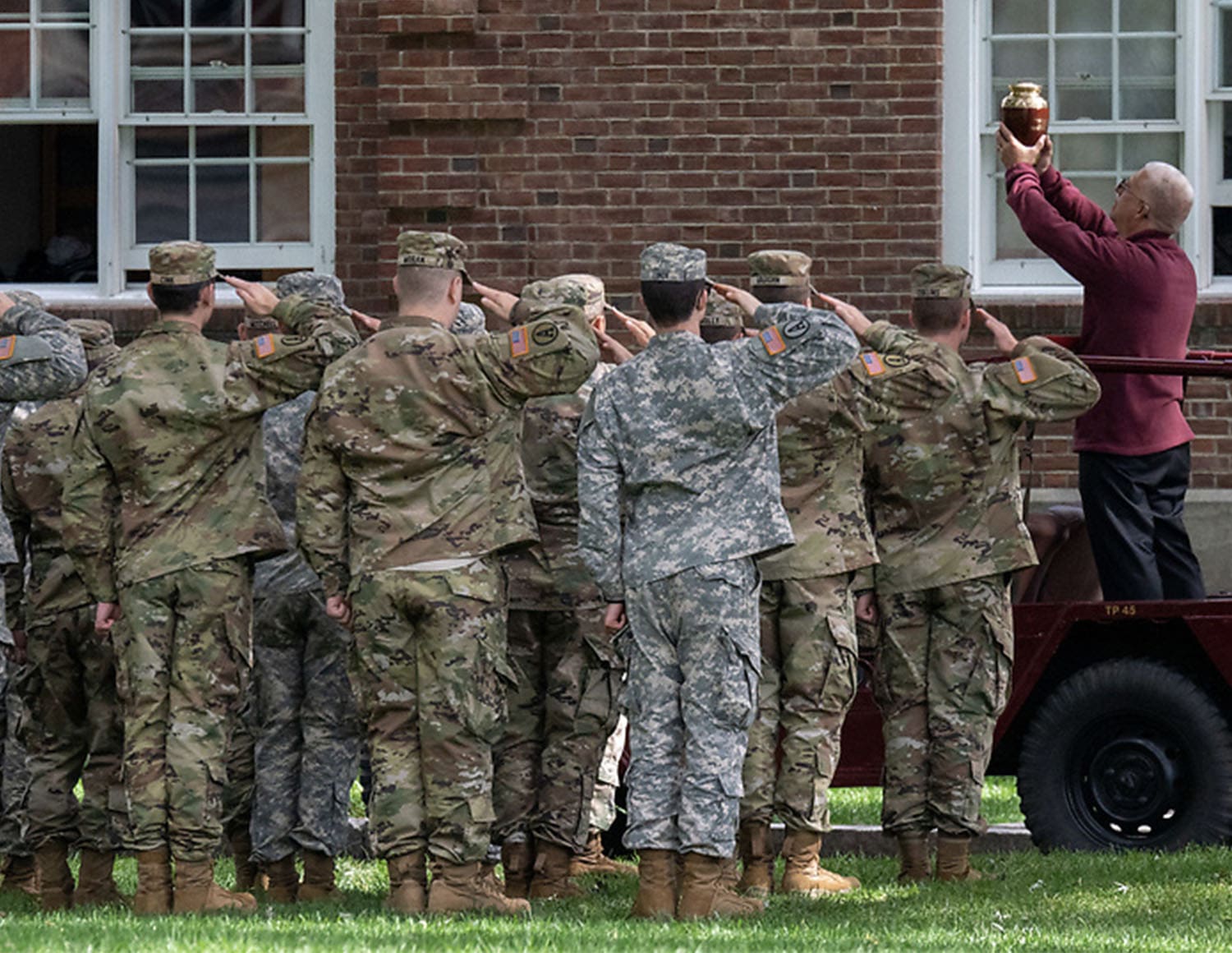 A parade of Norwich University Corps of Cadets rooks stretching back three and a half decades will probably remember enjoying the annual fall cookout at James C. “Jack” Abare’s Northfield, Vermont, farm and, if they succeeded academically, a special late January-early February dinner he sponsored on campus Abare gave because he loved, his family said Tuesday, always aiming to help students stay at Norwich and succeed.

Abare, who died Feb. 29, 2020, at age 86, was honored with an amassing of the Corps on the Upper Parade Ground and a memorial at the Doyle Hill cemetery.

Around 1 p.m. Tuesday, David Abare, a 1987 Norwich alum and one of Jack Abare’s four sons, rode in the back of a jeep holding up a maroon-and-gold urn carrying his father’s cremains. As the jeep circled the grounds, heading toward the Goodyear Gate, Abare’s other three sons, Mark, Paul and John stood with other family members, watching from Jackman Hall’s steps and joined by President Dr. Mark Anarumo.

On the parade ground grass, the Corps’ battalions stood in neat blocks, covering yards of space. The Corps’ cadre aligned in a row near the maroon-tarp-covered cannon and concrete tour strip.

At the cemetery, people shared memories of Abare. Dr. Frank Vanecek, Norwich’s senior vice president of student affairs and technology, said he’s met many thousands of Norwich graduates in his 46 years at the university, but remembers Abare above all.

“Jack, number one without a doubt,” Vanecek said. “I have never seen an alum who cared so much about the students.”

As Vanecek recounted, Abare was on Norwich’s drill and basketball teams and built a long record of service to nation and university.

Abare entered the U.S. Army as a second lieutenant and went to the Armor School at Fort Knox in Kentucky. He later served nine years in the U.S. Army Reserve, retiring as a captain. Along the way, Abare married Lona St. Cyr, his high school sweetheart; they were married for 61 years, living mostly in Boxford, Massachusetts. Jack later lived in Salem, New Hampshire.

Jack started his first business in 1964 and was self-employed for more than 50 years, Vanecek said. Abare would start and run eight businesses, five of which still exist.

Abare was Norwich Alumni Association chairman and Board of Fellows president. He was in the Partridge Society and was a university trustee. He was also a member of the Friends of the Kreitzberg Library and among 30 plus Norwich men in the Ancient and Honorable Artillery Company of Massachusetts.

Abare was a Partridge Society five-star general and a Garrison Associates founding member with more than 35 years of consecutive giving to Norwich. For his many contributions, Abare received the Norwich University Alumni Association Distinguished Alumnus Award in 1981 and the Board of Fellows Medallion in 1994His name is on the Bicentennial Stairs and a section of the Wise Campus Center dining hall where rooks typically eat; its wall features photographs of rooks with their platoons, often taken at Rook Dining Out cookouts at the Abare farm.

But Abare’s decorations mattered less than his devotion to students, Vanecek said. Besides the dinners, Abare offered an autographed $100 bill to the first cadet graduate who corralled Vanacek after graduation and asked for it. (Vanecek joked that sometimes rock, paper, scissors games were required to determine who got the cash.)

“Jack’s major accomplishment at Norwich University was his perseverance to try to do everything he could to help … every rook to stay here at Norwich, to help them through the whole process,” Vanecek said. “Calm down from a week or two of being hassled by the cadre. Sit and relax. Enjoy each other, bond with each other. Bond with Norwich.”

Max McIntire, a retired U.S. Army Special Forces operator who worked with Norwich’s U.S. Army ROTC and as a Corps of Cadets command sergeant major, said Abare was generous with his time and devoted himself to resolving others’ needs.

“That’s what he did, his whole life,” McIntire said. “(He was) the best damn human I’ve ever met and I hope that we all can live up to the memory of Jack and what he stood for. He was a great man.”

Paul Abare said his father gave to Norwich because he was grateful for what Norwich gave to him. He’d arrived on campus without even a winter jacket; his high school letterman’s sweater was his warmest outerwear.

“Norwich gave him a jacket,” Paul Abare said. “It gave him everything. It gave him his dignity, his honor … everything was from that school. And he gave it to all of his sons and everybody else. My son went there; it touches you. Norwich does something to you.”

The message on Jack Abare’s urn served as his final Norwich farewell.

“I have spent the last 69 years selling and loving the university,” the inscription read. “I have been known as ‘Mr. Norwich,’ the guy who bleeds maroon and gold. … Norwich has been my love.”