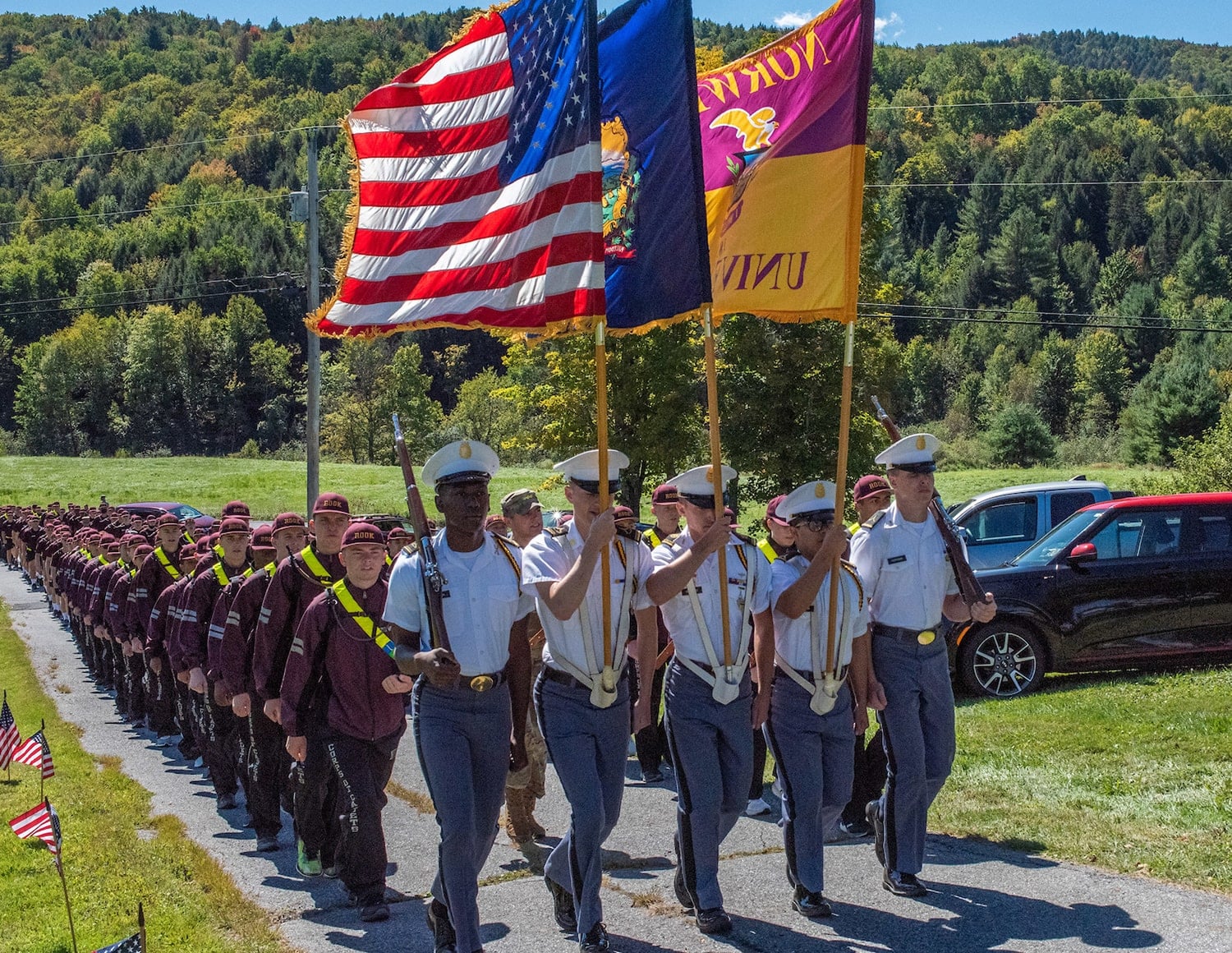 Jack Abare ’57, whose fall rook cookouts have become a 36-year tradition, will be honored by Corps of Cadets gathering and funeral

A memorial for a longtime university advocate, a nod to National Hispanic Heritage Month, and the annual Junior Class Ring dinner highlight the week at Norwich University.

At 12:45 Tuesday, Norwich University will hold a ceremony followed by a funeral for longtime advocate Jack Abare ’57, whose fall picnics for rooks on his Northfield, Vermont farm, have become a longstanding tradition.

Abare, who died in February 2020, spent time on the boards of trustees and fellows and the boards for the Norwich Alumni Association and the Partridge Society. He was also a member of the Friends of the Kreitzberg Library and among 30-plus Norwich men in the Ancient and Honorable Artillery Company of Massachusetts.

For his many contributions to Norwich, Abare received the Board of Fellows Medallion in 1994 and the Norwich University Alumni Association Distinguished Alumnus Award in 1981. A dining hall section at  Wise Campus Center and a Bicentennial Stairs step bear his name.

The Rook Dining Out has run each fall for 36 years (the 2021 version was two weeks ago). Abare and his sons, who help run the cookout, have said it helps rooks who have never been anyplace rural acclimate to Vermont and expresses Norwich’s welcoming family spirit.

At 12:45 Tuesday, the Abare Family will be on the steps of Jackman Hall and the Corps of Cadets will enter formation around the Upper Parade Ground’s interior. Abare’s son David, Norwich Class of 1987, will ride in a jeep that will circle the parade ground and carry his father’s cremains.

When the jeep exits, Paul Abare, another of Jack’s sons, will take the urn in a 1957 Mercedes Benz positioned inside Goodyear gate and go to the Norwich University Cemetery for the funeral.

— PULSERA PROJECT: Spanish language students and Norwich’s Modern Languages Department will raise social awareness and support Latin American artists by hosting the Pulsera Project, in which students and faculty will sell pulseras, hand-woven bracelets from Central American artists, from 11 a.m. to 1 p.m. daily through Friday at the Wise Campus Center.

In all, the group said, 800,000 bracelets are sold annually at 3,000 U.S. schools, colleges and universities nationwide.

“Our projects are guided by a philosophy of empowerment,” the project’s website said. “Rather than giving things to people, we empower people with the skills, opportunities, and education that allow them to provide for themselves and their communities.”

National Hispanic Heritage Month, Sept. 15 through Oct. 15, includes activities, concerts and art exhibits nationwide, some at the Library of Congress in Washington, D.C.

— CIVIC SCHOLARS: Norwich’s Center for Civic Engagement will hold a dinner for its Civic Scholars at 5:30 Wednesday in Milano Ballroom.

The four-year Civic Scholars Program launched in 2017 and is modeled after the national AmeriCorps volunteer program. Civic Scholars can receive a $3,000 annual scholarship for each year they complete program requirements; completing all four years means a $12,000 scholarship. The group helps arrange the twice-annual campus blood drives with the American Red Cross of Northern New England.

Norwich’s ring tradition began in spring 1923, when the senior class adopted a class ring for each member who would graduate in June. In time, ring design and presentation shifted to the junior year; a policy to standardize the ring’s design emerged in the mid-1960s.

Norwich rings, like the service academy rings on which they’re modeled, feature a class crest on one side, the school crest on the other and a bezel surrounding a stone or similar inset on top. Each class may design one side of the ring; the other side, dubbed the “Norwich side” or the “1819 side” for the university’s founding year stamped there, must follow a Norwich University standard.

The Class of 2019 donated a bronze statue of the university’s traditional keepsake and installed it near the Wise Campus Center during the bicentennial Homecoming weekend in 2019.