Circling back with ‘Circles’: Student remembers president’s act of empathy 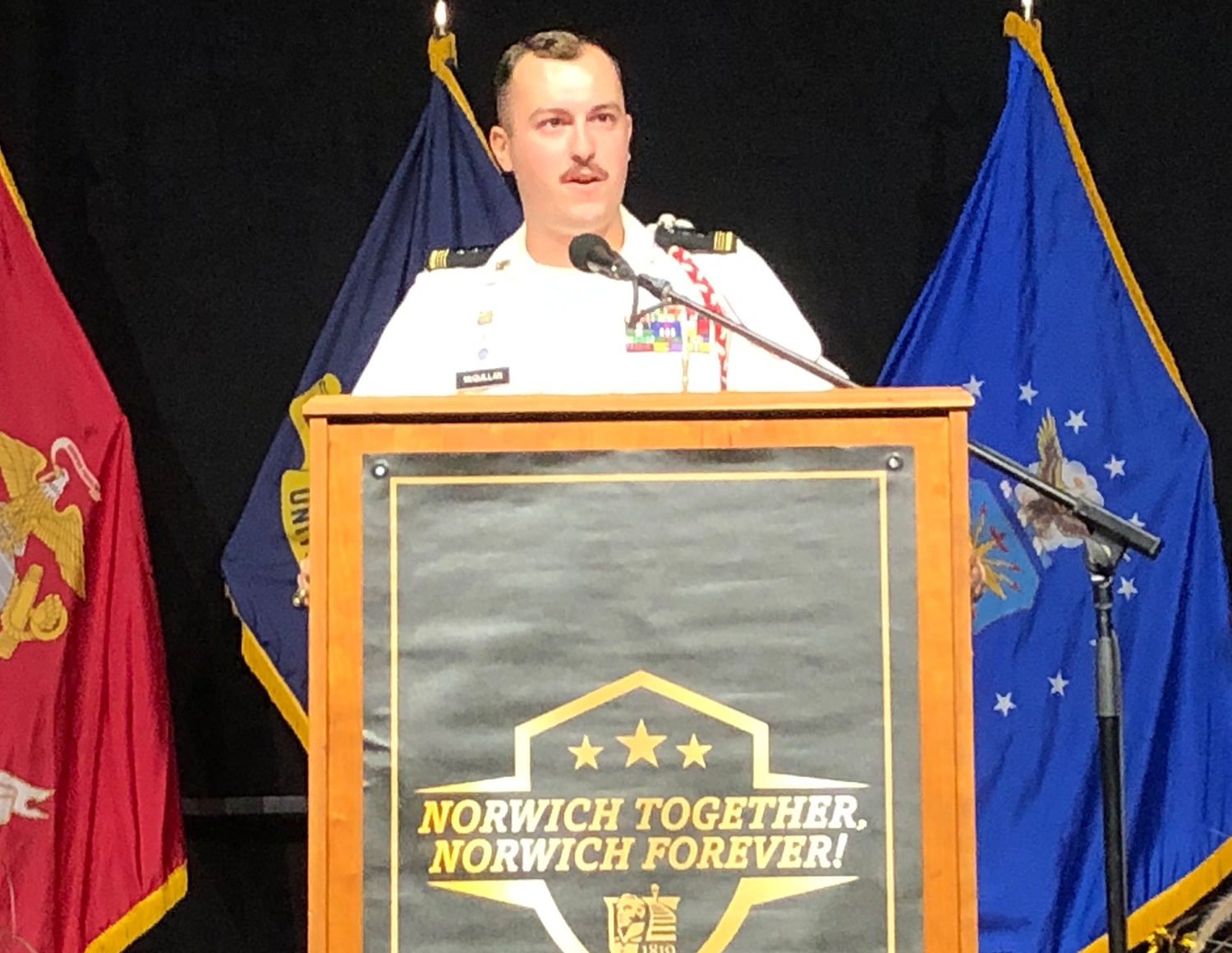 At inauguration luncheon, flash mob celebrates singer Dr. Mark Anarumo learned to like when he lived with students during the COVID-19 pandemic

I dare you to do something
I'm waiting on you again

The lyric from Post Malone’s “Circles” that seeped through Wilson Hall’s walls and into President Dr. Mark Anarumo’s room (and consciousness) could have seemed a cosmic message. The COVID-19 pandemic had forced an in-room quarantine that kept students in their rooms except to pick up to-go meals and visit bathrooms. Norwich University’s community was on tenterhooks. The moment dared a bold action.

Norwich senior David McQuillan recalled Wednesday that Anarumo delivered the bold action with empathy and compassion, first by living for a week during the pandemic-forced shut-in in Wilson, a Corps of Cadets barracks, later by living a week in Dalrymple Hall, a civilian dorm.

During a luncheon at Kreitzberg Arena to celebrate Anarumo’s inauguration as the university’s 24th president, McQuillan recalled living in Wilson, and serving as the Corps equivalent of a resident adviser last spring, when Anarumo moved into a fourth-floor single-occupancy room.

“He persevered, he understood, and now he could relate to the hundreds of students who were living on campus in isolation.”David McQuillan, Norwich University senior

McQuillan recalled feeling trepidation himself and hearing more from others. One cadet ran toward him early one morning, startled to have found the president in the bathroom. “What’s happening?,” the cadet said. “Why is he here?”

McQuillan said he could, in hindsight, understand his Corps colleague’s consternation.

“I can see how going into the bathroom to get ready for the day, probably still waking up, rolling out bed and seeing the president of the university, a two-star general in the Vermont State Militia, would be a bit of a shock,” he said. “But that was part of the plan; he wanted to live just like anyone else in barracks. He did not want any special treatment.”

The president could have gone back to his Woodbury Hall quarters after a single night of shenanigans (wily students stole Anarumo’s door card as a spirit mission), and loud music (which echoed into Anarumo’s room through a wall shared with a bathroom), McQuillan said. But he didn’t.

“He persevered, he understood, and now he could relate to the hundreds of students who were living on campus in isolation,” McQuillan said. “He accomplished the mission, no matter what. And for that, on behalf of the entire student body, I say ‘Thank you for that gesture of solidarity, sir.’”

“Maybe you don’t understand what I’m going through,” the song went. “It’s only me. What you got to lose?”

Last spring, Anarumo made sure he knew exactly what the students were going through.