In celebrating inauguration, Norwich University hails a leader for the moment and the future 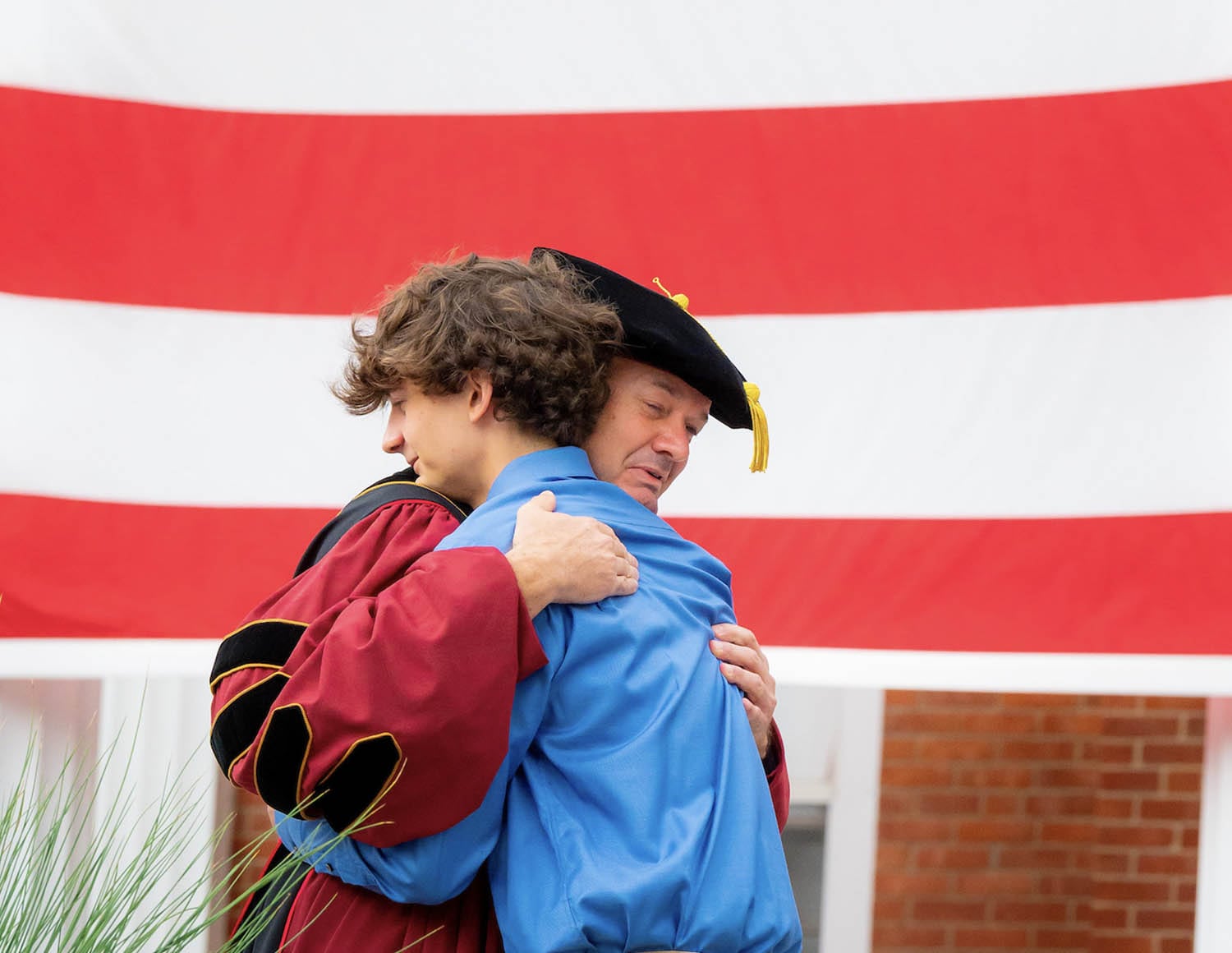 Dr. Mark Anarumo has served and fought and led and taught, working alongside leaders with chests full of medals and a constellation of stars. His career spun him around the world and marched him through academia’s apex. In June 2020, his map pin landed in Vermont, and Norwich University. On Wednesday, the Upper Parade Ground filled with his family, mentors and the university community, to see Anarumo officially inaugurated as president.

“Being a leader is acting in the face of fear, I think you call it grit. (Anarumo) has grit.”Retired U.S. Air Force Gen. Darren W. McDew

He also saluted retired U.S. Air Force Gen. Darren W. McDew, one of Wednesday’s guests, whom Anarumo called a life-changing mentor and the finest officer he’d served with. Anarumo also thanked his stepmother, Felicia Ruff, for her guidance, and his aunt and uncle for helping raise him after he lost his mother at age 5. And he thanked his children for moving gamely as he changed posts and forgiving him for missing myriad life moments as he served.

Anarumo said he’d put his four children, Mark Jr., Katie, Julia and Nick, through a lot, probably too much, dragging them in and out of communities and schools; he figured his four children had collectively attended 14 high schools and lived with him on four continents and in countless countries. One such country required a quick exit after Anarumo discovered his children’s names on a kidnapping and hit list.

“They have missed their father at sporting events, celebrations, birthdays and holidays,” Anarumo said, squeezing a handkerchief that had been his grandfather’s. “But through a career spanning over 30 years, their support has never wavered. I thank you all individually, but as a group, for always being my biggest fans and supporters. I love you all very much.”

Julia and Nick returned the love from Jackman Hall’s steps. Julia praised her father’s indefatigable energy; Nick praised his unstoppable work ethic. In a video, Mark Anarumo Jr. who commissioned into the Air Force in May and is flying unmanned aircraft in Nevada, described his father as an exemplary role model.

Although some sons assiduously avoid their fathers’ footsteps, Mark Jr. said he pursued them.

“I’ve made my entire career following my father’s path,” Mark Jr. said. “Everyone always says they don’t want to be like their father, but for me, it’s not at all true, I want to be exactly like my father — all his morals … everything he’s done to take care of others and really develop other people, focusing on making sure everyone is taken care of before himself is something I’ve idolized my entire life.”

Meanwhile, McDew said Anarumo has a litany of traits to idolize — he’s a warrior, scholar, ambassador, and, especially, a leader. Americans expect their leaders to have technical expertise and perform better tomorrow than they did today, with efficiency and elan, always, McDew said, and Anarumo did.

“Those performances by the young man behind me are well documented,” McDew said, referring to Anarumo. “Also, his reputation for having a high standard of character, for integrity and justice is well known. … Leading and inspiring others was his profession and he did it well.”

McDew saw Anarumo up close, hiring him for a second wing command. McDew said Anarumo entered an organization that suffered through a mismatched commander and had low morale. Then-Lt. Col. Anarumo buoyed spirits quickly, McDew said, helping the base at Fort Bragg, North Carolina, earn an installation excellence award as he did.

Anarumo modeled what right looked like, McDew said, seeking respect over popularity, but gaining both. He provided clarity of mission and vision, he brought people together and strengthened relationships with his peers.

“Being a leader is acting in the face of fear, I think you call it grit. (Anarumo) has grit,” McDew said. “Being a leader is about the content of your character, it’s not about who you are, it’s about who you’re determined to be. … President Anarumo, I envy you as you embark on this exciting and noble chapter, leading what I believe is the finest set of citizens this nation will produce.”

Anarumo said he takes seriously his duty to lead the students and ready them to lead. The university’s founding tenets, espoused by U.S. Army Capt. Alden Partridge, still resonate two centuries later, Anarumo said, and Norwich University will keep thriving by seizing new opportunities — sometimes preparing students for yet-to-come industries — and by rededicating itself to these ideals.

“Our military, industries, service sector and economy are going to demand an increasingly high level of critical thinking, technical savvy and the ability to lead effectively,” Anarumo said. “I’m very proud, every day, of our students, who demonstrate on a daily basis what it means to be imaginative, and curious. Who understand what it means to serve selflessly and to be contributing citizens of our world.”