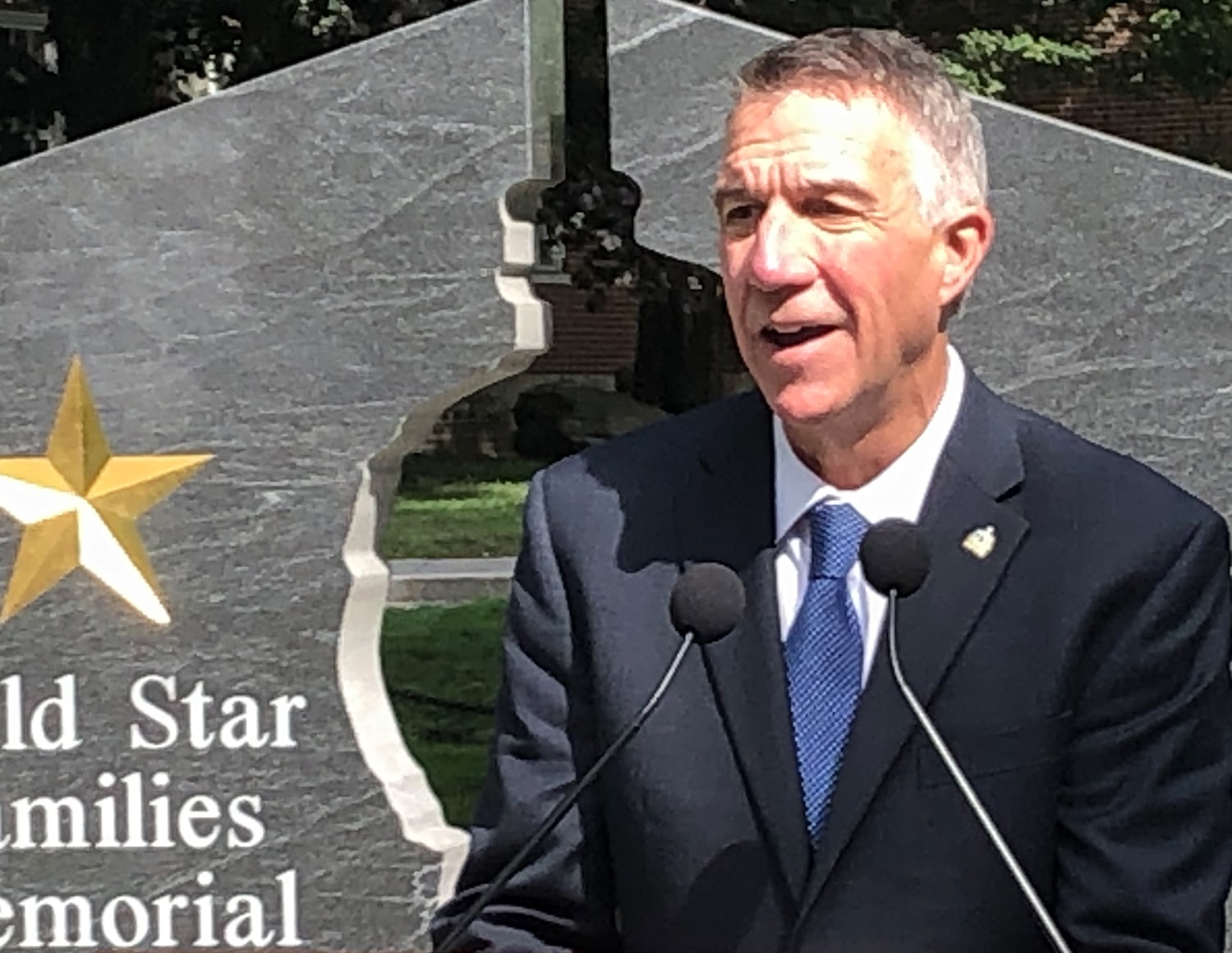 U.S. servicemembers acted with resilience and resolve then and since, Phil Scott says

Vermont Gov. Phil Scott laid a wreath at the state’s Gold Star Families monument on Saturday, honoring the nearly 3,000 Americans who died in the Sept. 11, 2001, terrorist attacks. He hailed the service of armed forces personnel and first responders who rescued people afterward and ensured the nation’s safety since.

The monument is adjacent to campus and Norwich University was designated the state site for 9/11 remembrance back in 2001, a couple of weeks after the attacks, by then-Gov. Howard Dean.

In brief remarks, Scott hailed America’s resolve and resilience and said the terrorists who sought to unmoor Americans from their values failed.

“That day, 20 years ago, we were attacked because of the freedom we represent — a nation where every citizen, regardless of their gender, race or religion can participate in their government.”Phil Scott, Vermont governor

Scott, a Republican elected to his third gubernatorial term in 2020, spoke before a couple of hundred people, including about a dozen members of American Legion Post 1819 and four members of Norwich’s Corps of Cadets, with Regimental Commander Matthew Cutting. Interim Commandant William Passalacqua ’88 gave opening remarks.

Scott said he, like other Americans, will never forget where he was and what he felt on 9/11, nor the sacrifice of the people who served and sacrificed afterward. He said he’ll remember the good Samaritans who ran toward, not away from, danger to help people they never met in New York after the hijacked planes struck the World Trade Center’s towers.

“That day, 20 years ago, we were attacked because of the freedom we represent — a nation where every citizen, regardless of their gender, race or religion can participate in their government,” Scott said.

Scott said he was proud to see Vermonters flying F-16 fighter jets to secure the skies within hours of the 9/11 attacks and that thousands of Vermonters served afterward. Some of them, he said, were with the state’s National Guard and deployed overseas.

Too many of these Vermonters, Scott said, died in service, including Vermont Guard members Tristan Southworth and Steven Deluzio, who both died in Afghanistan on Aug. 22, 2010.

Deluzio, 25, a staff sergeant from South Glastonbury, Connecticut, and a onetime Norwich student, and Southworth, a specialist from Hardwick, Vermont, died during a firefight with insurgents. Southworth had been trying to extricate another American soldier.

Because of Deluzio, Southworth and their colleagues, Scott said, Osama bin Laden was weakened, al-Qaida was crippled and the United States stayed safe.

“Since then, there hasn’t been another 9/11 because our antiterrorism operations are better and stronger than ever before,” Scott said. “(Norwich) raised true heroes and helped them to be the extraordinary people they were. And we’re so grateful for that, for their incredible contributions to our nation.”

After Scott spoke, Kevin Hawley, a 1988 Norwich University graduate and retired U.S. Marine Corps colonel, described American Legion Post 1819, so named for the date of Norwich's inception, its membership of 9/11 veterans and the attacks’ lasting effects.

Hawley, the Legion post’s vice commander, had gone to work at the Pentagon the morning of Sept. 11, 2001, expecting a routine day of briefings. Instead, he left a few hours later, walking toward the only accessible parking lot, as a hole, created by a crashed plane, smoldered in the building’s side.