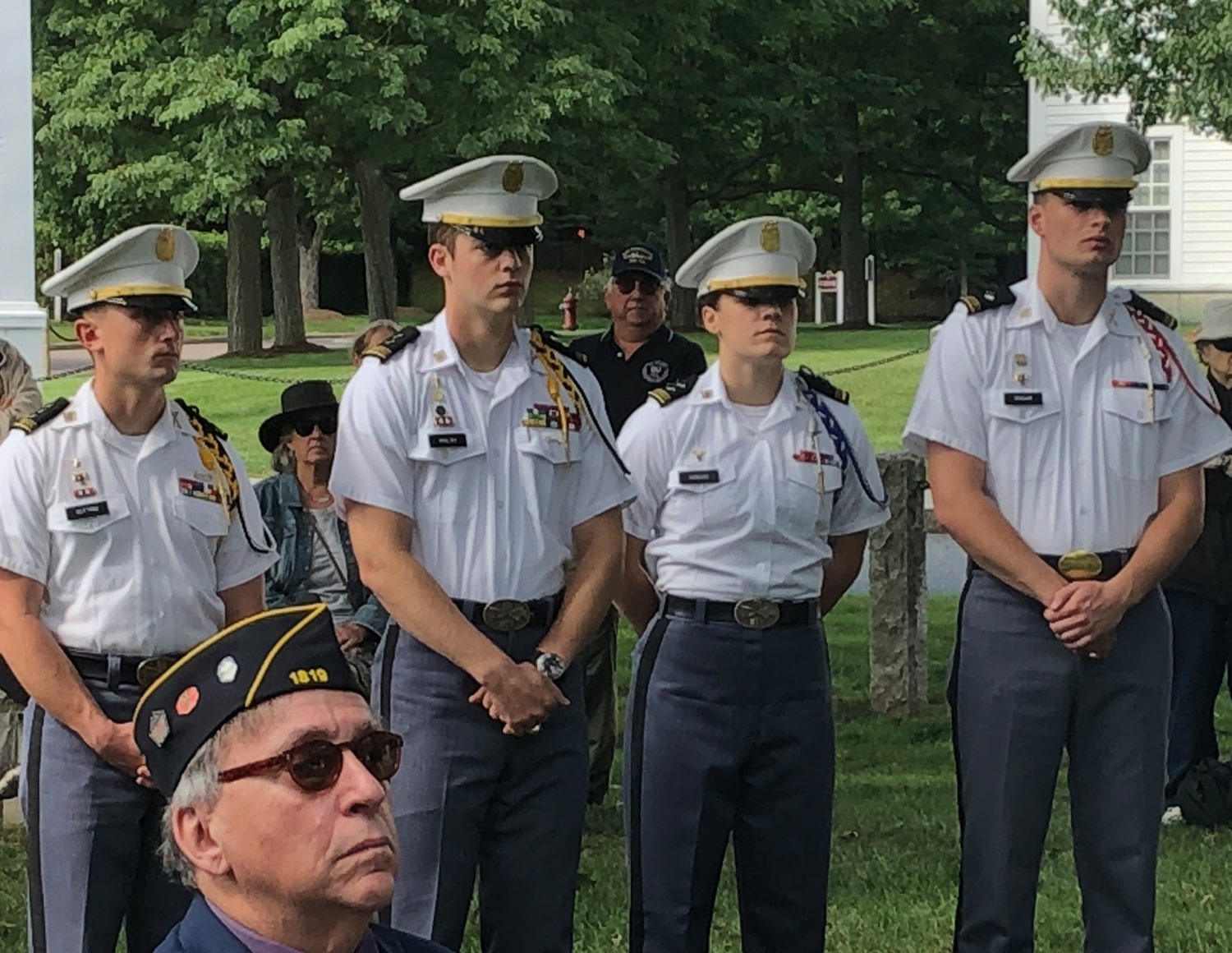 Rebekah Howard remembers leaving her bedroom and wandering down a hallway the morning of Sept. 11, 2001, to find her home’s living room door closed. The Norwich University senior and Corps of Cadets member was 4; her mother had shut the door as she worked to fathom the news of the terrorist attacks.

“She wouldn’t let me in at all,” Howard recalled of her mother. “Then (my parents) tried to explain what had happened, but I was so young I didn’t understand.”

Howard joined fellow seniors and cadets Evan Wagar, Aidan Walsh and Matthew Cutting, the regimental commander, at Saturday morning’s wreath laying at the state’s Gold Star Families monument, which is adjacent to campus. She said she came to hear Vermont Gov. Phil Scott and set an example for her younger cadet colleagues who weren’t born 20 years ago.

“The whole campus was completely silent. Just marching my way back across the tour strip (near the cannon) in the best dress uniform I had with that honorary rifle … was incredibly powerful for me.”Aidan Walsh, Norwich University senior and cadet

Howard recalled feeling shock and horror in middle school, when she read newspaper articles about the planes hitting the World Trade Center in New York City and seeing a famous New York Times photo of a man falling from one of the tower’s high-up windows.

“It just sends shivers down my spine,” she said, recalling the picture. “It’s very, very emotional.”

Howard, a nursing major, said she hopes to relate to classmates and Corps colleagues the weight military families felt after the attacks and to “foot-stomp” how much the country means to her and how much freedom matters to everyone.

Wagar, a computer security and information assurance major, was 2 when the attacks happened and remembers how airplanes, which had flown over his family’s Lebanon, New Hampshire, home abruptly stopped for days afterward.

Wagar, who’s enlisted in the U.S. Coast Guard, said his generation grew up with the wars 9/11 precipitated, in Iraq and Afghanistan. He said these now-past conflicts and the potential for new ones rattle in the heads of Corps members, some of whom are preparing for armed forces careers.

Walsh was 1 on 9/11, too young to remember anything. But he’s seen a picture of him and his then-2-year-old sister looking bewilderedly at a large television broadcasting that day’s news.

Walsh, a criminal justice major, will enter the U.S. Army. He said his vigil tour, a slow Upper Parade Ground walk he and other Corps seniors made to honor the attacks’ victims, was moving and emotional. (Howard took the first tour, at 12 a.m. Saturday; Cutting took the last, which ended at 12 a.m. Sunday.)

“The whole campus was completely silent,” said Walsh, who walked at 2 a.m. Saturday. “Just marching my way back across the tour strip (near the cannon) in the best dress uniform I had with that honorary rifle … was incredibly powerful for me. But it was also powerful to know that people who saw me really embodied that Norwich spirit.”

Cutting, who led the university’s traditional 9/11 remembrance ceremony on the Upper Parade Ground at 10 p.m. Saturday, was little older than a year when the attacks happened. Nevertheless, through his parents’ lessons and his own reckoning, he surmised the importance.

Cutting said it’s his, and the Corps’, duty to transmit that importance, so everyone on campus can reflect on how the United States, and its people, responded.

“It’s important that people who were alive and remember share their stories and that those live on and that people’s memories live on,” said Cutting, a criminal justice major. “We lost a lot of people that day and in the last 20 years, and as long as their stories keep being told, they’ll live on forever.”