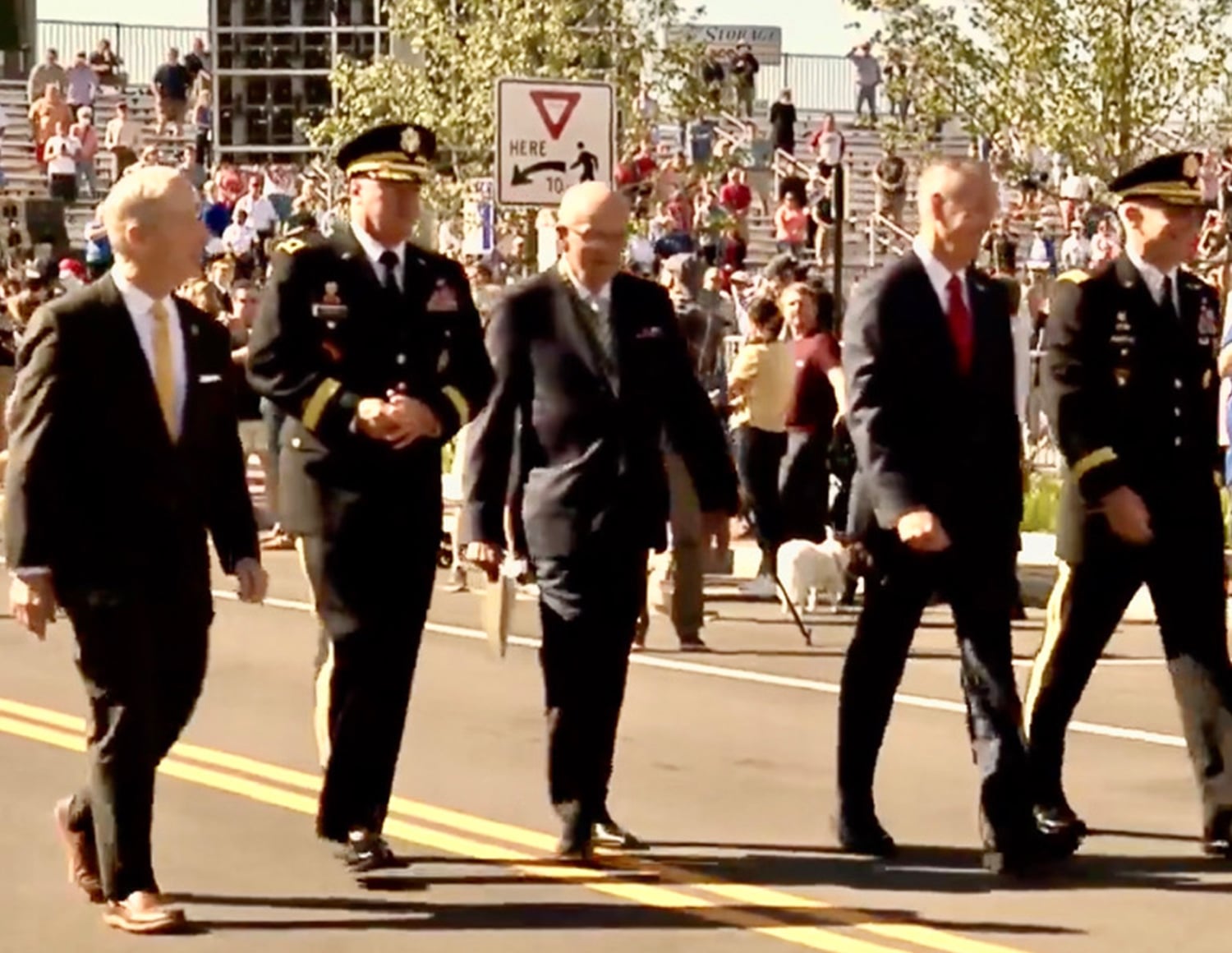 “If you stick your hand in the air at some recruiting station and say, ‘Send me! Send me!,’ you are my hero.”Gordon R. Sullivan, retired U.S. Army general, Norwich University Class of 1959

The McConville from the intersection and its accompanying street sign is James McConville, now the U.S. Army’s staff chief, a post Sullivan held from 1991 to 1995. The Dunford is retired U.S. Marine Corps general and former Joint Chiefs Chairman Joseph Dunford, who was born in Boston and raised in Quincy.

Bronze busts honored McGinn, Rand, Keefe and Sweeney, the Patriot Ledger reported. Names of 11 generals from Quincy dating back to the 1700s were engraved in the park’s stonework.

Sullivan, who was born in Boston and grew up in Quincy, was one of five generals who spoke at Saturday’s dedication along with Quincy Mayor Thomas Koch, Massachusetts Gov. Charlie Baker and U.S. Rep. Stephen Lynch, D-Mass.

After Gen. Dennis Reimer, the U.S. Army’s 33rd chief of staff, introduced him, Sullivan described his family’s emigration in 1871 from Scotland to Quincy to work in granite (his great grandfather was a stonecutter). Sullivan recalled his mother taking him as a boy to the Abigail Adams Cairn in Quincy, which marks the spot where she and her son John Quincy watched Charlestown, Massachusetts, burn on June 17, 1775, after a British attack during the Battle of Bunker Hill.

Sullivan said his mother relayed how much winning at Bunker Hill had cost the Brits — 200 were killed, 800 were wounded.

“That was a lesson to me,” Sullivan said.

Sullivan, who served 36 years in the Army, also recalled the Fore River Shipyard, where crowds of veterans built enemy-leveling warships, and praised people who, as many Norwich University students do, decide to serve in the armed forces.

“If you stick your hand in the air at some recruiting station and say, ‘Send me! Send me!,’ you are my hero,” he said. “There is nothing like being in a uniform and serving the United States of America.”

Sullivan also remembered attending Norwich University and shouted out Schneider. (Norwich has honored Sullivan by putting his name on the Sullivan Museum and History Center and on the Bicentennial Stairs.)

The Generals Bridge and park project, started in 2019, is a $35.6 million Quincy city-and-Massachusetts state endeavor funded by the Massachusetts Transportation Department.

See a livestream of the dedication.