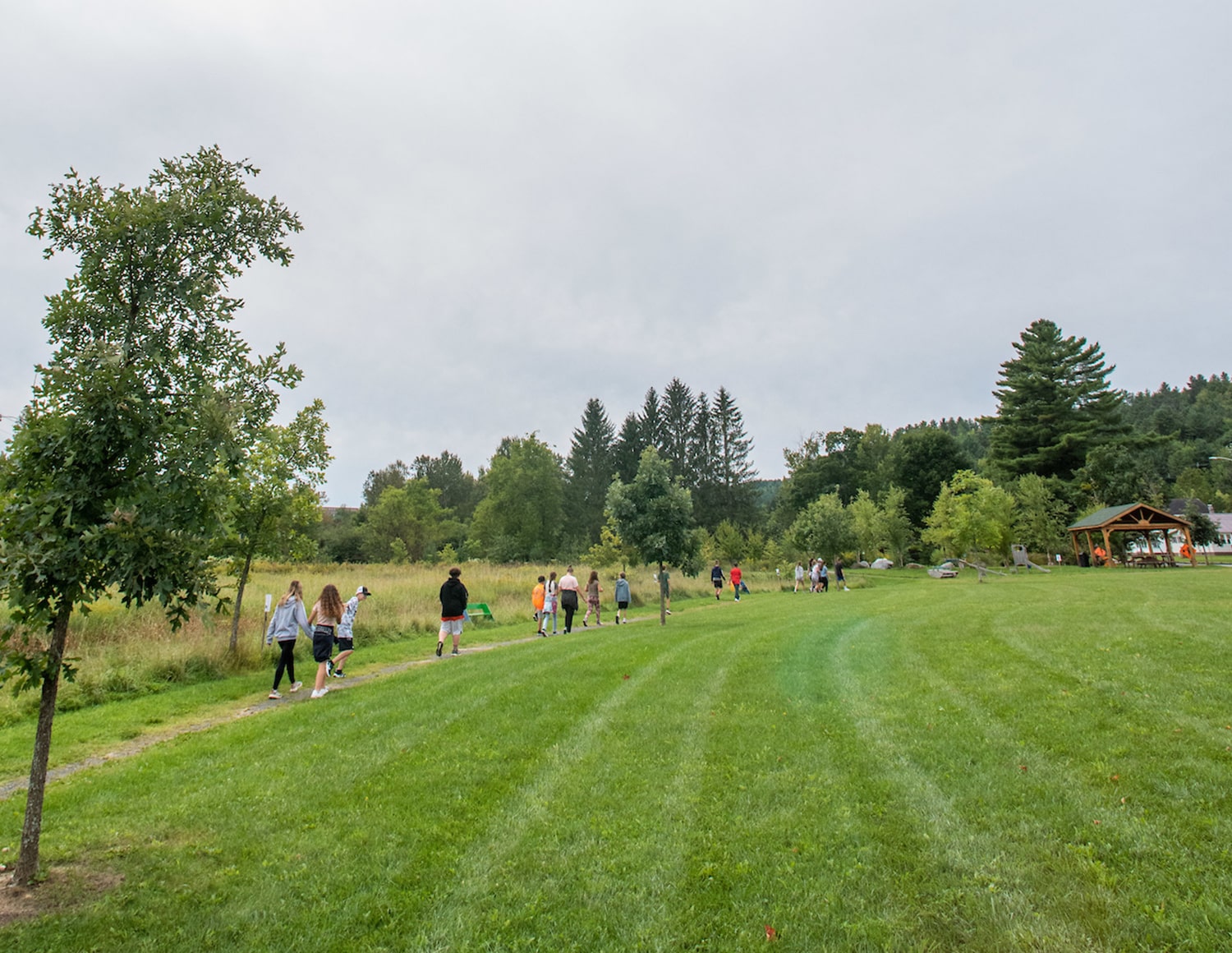 Tropical Storm Irene’s rains sparked flooding, wrecked homes and caused more than $2 million in property damage in Northfield, Vermont, in 2011. But from its ravages, emerged a chance to restore and educate, associate professor of biology Dr. Simon Pearish said.

In interviews with norwich.edu and “Vermont Viewpoint” on Waterbury, Vermont’s WDEV radio, Pearish described the walk and the conservancy’s emergence as a locally focused complement to its wider-looking parent, the Center for Global Resilience and Security.

“I’m really trying to show that we didn’t end up here by accident … the river is really a central reason why people have always lived in this area.”Dr. Simon Pearish, associate professor of biology, Norwich University

“Rather than approach this (anniversary) as a catastrophe that needs to be memorialized … I look at it as there’s a broader context here that’s really rich for exploring, that is the human relationship to rivers.” Pearish told norwich.edu. “Tropical Storm Irene is just one example of the way we interact with rivers.”

As the Barre-Montpelier Times-Argus reported, the Dog River at Northfield Falls reached 12.26 feet, 6 inches above the previous record, when Irene dropped 11 inches of rain on Vermont; rains fell in parts of the state at rates of 1 to 2 inches per hour. Six hours before the surge, the newspaper reported, the Dog River had been below 2 feet deep at the measuring point. The Times-Argus also reported that during the storm, 25 feet of water flooded Northfield’s wastewater treatment plant, knocking it out.

The Lake Champlain Basin Project reported that Northfield acquired seven contiguous properties (about 5 acres) along the Dog River, adjacent to the town’s village center, after Irene’s damage. Grants from Lake Champlain Basin Project and other agencies (notably the Federal Emergency Management Association) helped restore the floodplain and develop recreational amenities, such as the Water Street Park, the report said.

The Water Street Park occupies the former site of seven homes. (Eighteen houses were bought back for the project.) Pearish said Michele Braun, who’d been Northfield’s planning manager (and now leads the nonprofit Friends of the Winooski River) laid the groundwork for the floodplain restoration and home buybacks with a Dog River Hazard Mitigation Plan, which was executed after Irene and finished in August 2018.

The Lake Champlain Basin Project said the Friends of the Winooski River in 2015  developed a model stream table, which it showed first at Northfield schools and later at Northfield’s Labor Day celebration on the village green to teach river dynamics. The report added that Norwich University and Northfield public school students started using the floodplain park as an outdoor classroom to explore the environment through hands-on projects.

“That’s a wonderfully cool thing about this project,” Friends of the Winooski Executive Director Michele Braun told the newspaper. “It’s all in — from sixth-graders to Norwich University cadets.”

An interdisciplinary team developed an education and outreach program as a complement to the floodplain restoration. Pearish said the team involved several Norwich University professors.

Pearish told Vermont Viewpoint host Ric Cengeri that the university worked with its Archives and Special Collections, the Northfield Historical Society and knowledgeable local residents, to develop the river walk, which started Aug. 28, on the storm’s decennial. The signs were up during Northfield Labor Day celebrations, in which Norwich University has long participated, and will come down Thursday.

Signs posted throughout the Water Street Park describe how the river and the people who live around it interact, Pearish said. He said he wanted particularly to show how the river enabled industrial development  in Northfield — booms in wool textile mills, railroads and granite. Pearish said the booms prompted homebuilding near the river, which ultimately left them vulnerable to flooding.

“Most of those (businesses and houses) would not have ended up here if not for the power that was procured from rerouting the river, using dams to harness the power of the Dog River,” Pearish told Cengeri. “I’m really trying to show that we didn’t end up here by accident … the river is really a central reason why people have always lived in this area.”