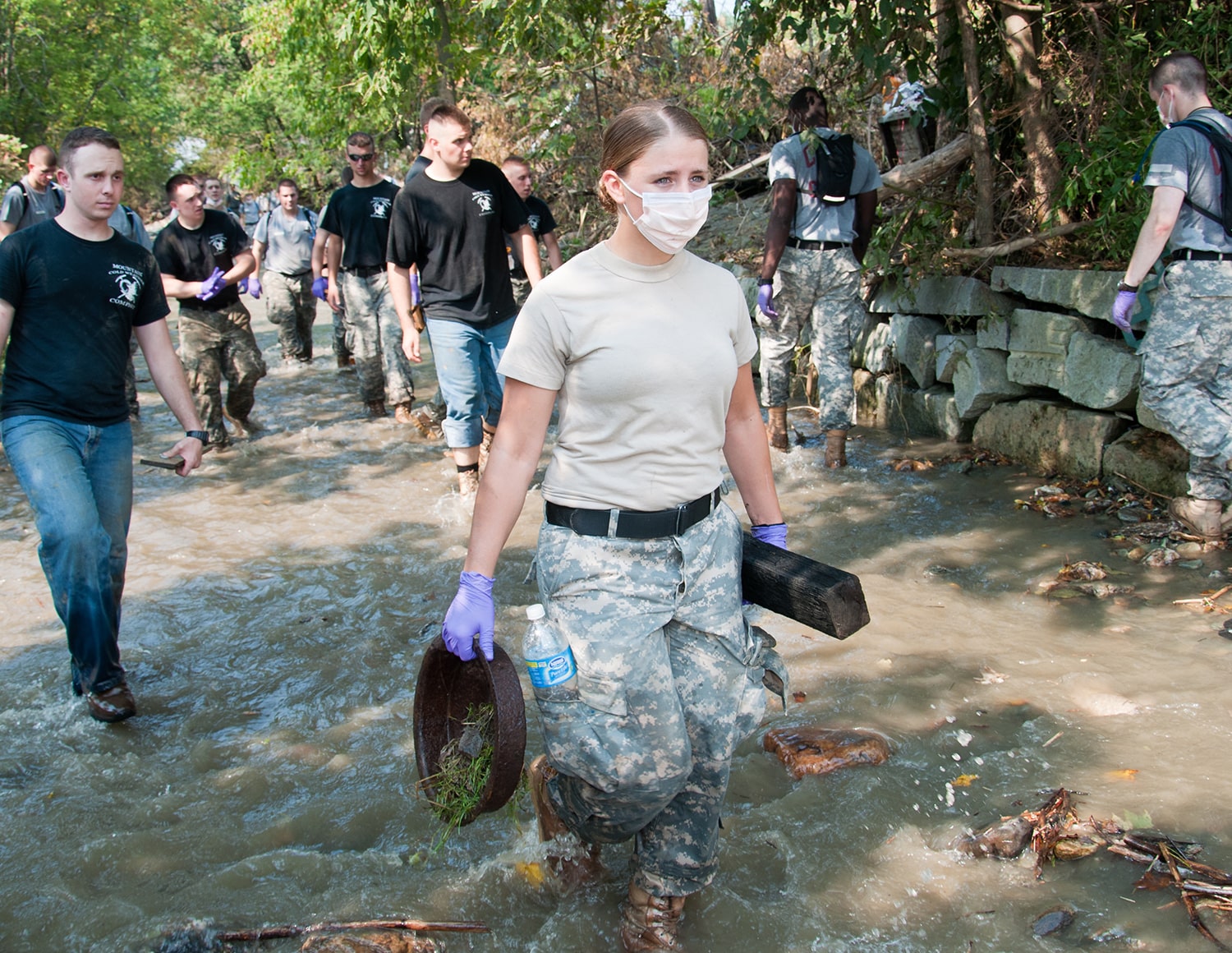 Norwich University serves. And when Tropical Storm Irene hit 10 years ago, dozens of students, civilian and Corps, served en masse, rolling up sleeves and helping Northfield residents cope. Within a month, Norwich students had spent 4,000 hours volunteering, cleaning up in the storm’s aftermath.

Irene hit Vermont on Aug. 28, 2011, dumping 11 inches of rain in 24 hours. As Seven Days, Vermont’s alt-weekly, tallied, six people died; 500 miles of roads were wrecked; 277 bridges were washed away or damaged; access to 13 communities was impeded; 3,500 businesses and homes were flooded; and 17 mobile home parks were swamped. The Dog River in Northfield, Vermont, overflowed its banks.

Ellen Liptak, then Norwich’s associate director of human resources, told the Norwich Guidon student newspaper later that month that 26 students and about 20 staff and faculty members were initially affected by flooding.

“The water came up really fast,” Rob Berkey, an instructional developer for Norwich’s academic computing told the Guidon. “I had about 4 feet of water in my main living area.”

“It looked like a mud puddle when we came back to the house,” Balasco said. “There was a trash can in the kitchen that ended up in our room, and the couch was on top of our glass coffee table.”

In a November 2012 YouTube video on the Norwich response, Northfield Emergency Services Director James Baraw recalled how stormwaters had ruined 35 homes in that area.

“I’ll never forget coming to this (Northfield) fire station and just seeing a sea of Norwich Cadets and Norwich civilian students standing out there, mucking out, digging, working day and night. It was really extraordinary,” then-Vermont Gov. Pete Shumlin said in the video. “They didn’t stop, they didn’t quit they just stayed hard at it.”

In her oral history book, “Voices from the Flood,” Jeanne Weston Cook relayed an interview with Caleb Albetti, a St. Jacob Orthodox Church priest: “Many soldiers, cadets, hundreds of them, have been helping rebuild our town. … I saw a soldier carrying a case of water; he was running like he was bringing water to the front lines of a war. … His run seemed sacred, like he needed to run like that for the people who need water.”

A report from now-President Emeritus Richard W. Schneider, saved on a serviceacadyforums.com message board, tracked some of the help. Here are highlights.

— Thirty-seven members of the Mountain Cold Weather Company worked with Northfield Police and other first responders to evacuate Northfield residents.

— About 290 volunteer hours were logged; 110 students dispatched to Northfield to clean up.

— About 894 volunteer hours were worked. Students, including some from the women’s soccer team, men’s hockey team and the Corps’ Mountain Cold Weather and 3rd Battalion companies dispatched to Northfield, Moretown and Waterbury.

“Our students really stepped up … because they truly heard and felt what the community was experiencing,” she said, adding some students had seen storm damage in their own homes. “They felt somewhat helpless, and that sense of helplessness drove them to want to do whatever they could, whenever they could. Over the course of three or so months, our students put in thousands upon thousands of hours of direct service.”

Baraw said the students knew what to do with little prompting.

“You could say to a group of … seven kids, ‘We want this basement cleaned out. Here’s some buckets, here’s some shovels,’” he said. “We didn’t have to explain to them what to do. They went in, jumped into it and went to work.”

In the YouTube video, then-student Frank Carissimo said, “Myself and about seven other people just went over a bridge, someone was leading us. They dropped us at a house and said, ‘Hey, clean it.’”

Then-student Allyson Murphy said the devastation “tore her heart out” and that she and her fellow students connected deeply with Northfield’s townspeople.

“I wanted to do everything I could to ease their life,” she said. “It felt good to be helping these people who really needed us.”