What you have in minds 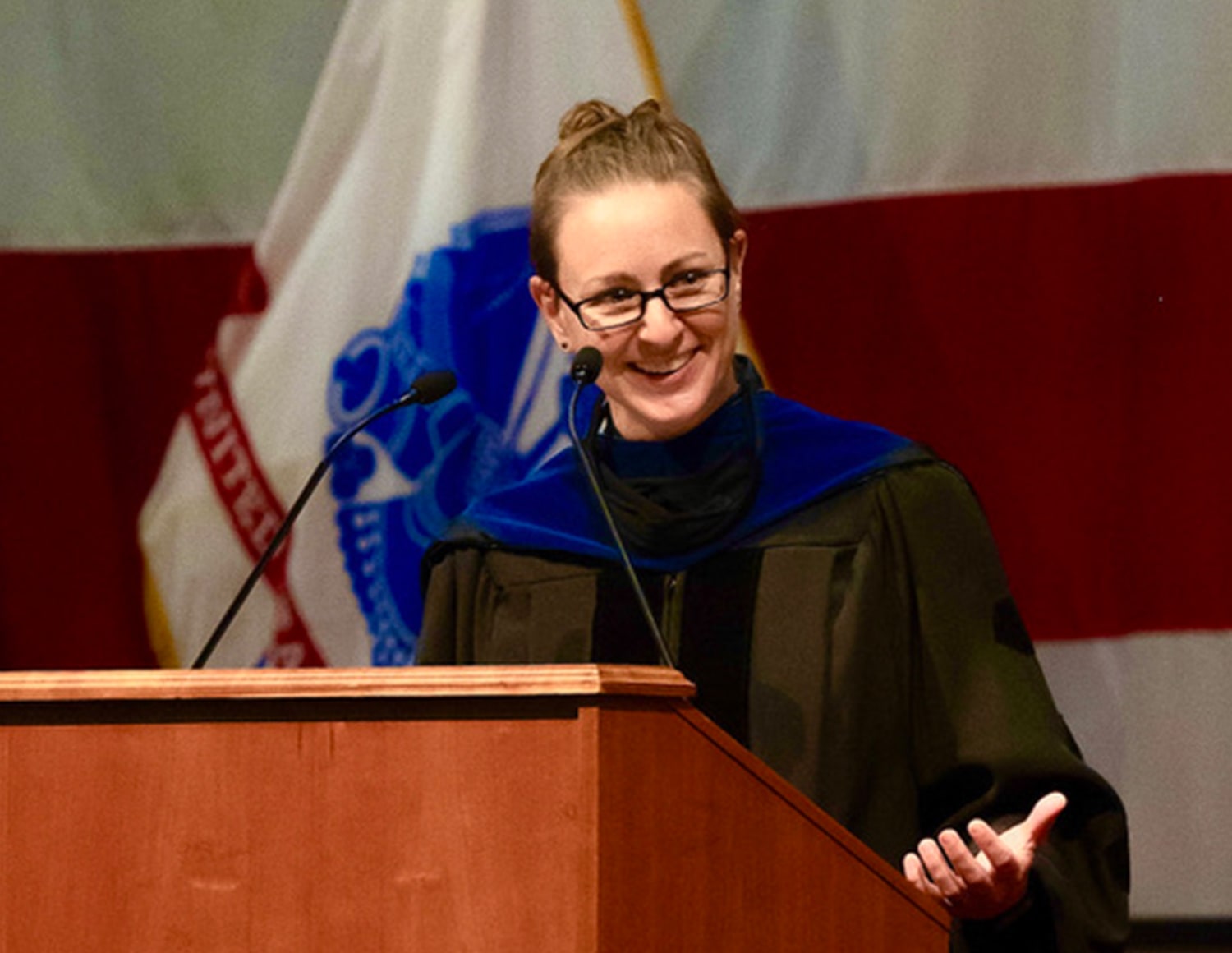 As a biologist, neuroscientist and professor, Dr. Megan Doczi has long had brains on the brain. They’re fascinating, she said, the only human organs that can contemplate themselves. In them, tens of billions of neurons connect with more trillions of synapses to form a network vaster than the Milky Way.

Brains keep people living and learning, she said, and are always changing.

At Convocation on Aug. 31 at Shapiro Field House, Doczi led a trip around every cranium’s crown jewel and described her endless thirst for knowledge.

Convocation, an annual academic-year-starting rite, brought students from across campus for pomp and processions. The Regimental Band played; the Color Guard paraded; and faculty filed in, clad in colored robes and academic finery.

“Detaching from the unfruitful components of your life will free up energy to establish more meaningful growth … we have to accept that it’s OK to let go of what’s not beneficial for us.”Dr. Megan Doczi, associate professor of biology, Norwich University

Interim Provost Stephen Fitzhugh announced student award winners. President Dr. Mark Anarumo promised not to read his 12 pages of remarks (drawing a loud ovation) and encouraged students to seize learning chances in class and beyond. Learning can often involve listening to others and adapting perspectives, he said, not everything is a dig-in-your-heels hold-your-ground conflict.

In 1949, Canadian neuropsychologist Donald Hebb described how repeated experience prompts human brains to form and reinforce neural pathways, by repetitive firing of electrical signals. “Neurons that fire together, wire together,” he said, describing the phenomenon.

In other words, Doczi said, neurons that fire when their neighbors fire will cooperatively form strong, stable, collective connections. Although some of these connections are fleeting, some endure.

“This is a connectivity that will unite you for life,” she said.

Freshmen, Doczi said, will form new Norwich connections as they progress; seniors’ 4-year-old Norwich connections will carry them into new careers. But to stay strong, neural connections must be reinforced — this is the “use it or lose it” idea. (Synapses out of sync will lose their link.)

People can decide which connections to reinforce, Doczi said, pruning synaptic ties as a gardener might prune a tree.

“Detaching from the unfruitful components of your life will free up energy to establish more meaningful growth,” she said. “For us to redirect this energy in a more positive way, we have to accept that it’s OK to let go of what’s not beneficial for us.”

But though Doczi shadowed doctors in hospitals and took the Medical College Admission Test, she felt out of sync. She wanted to study medicine, but wasn’t sure she could handle patient care’s emotions when things went wrong.

So, she refocused, turning away from others’ expectations and focusing on the stable connections that would drive her down her own path and toward her dreams.

She advised students not to fear the sweaty-palms, heart-racing fight-or-flight response; it makes people feel alive, and fight for what matters.

“In the words of President Emeritus Richard (W.) Schneider, ‘We are one team, one fight,’” Doczi said. “In the classroom, on the field, our neurons are firing together, wiring together. And this is our chance to build something so strong that it will transcend the boundaries of Norwich University.”