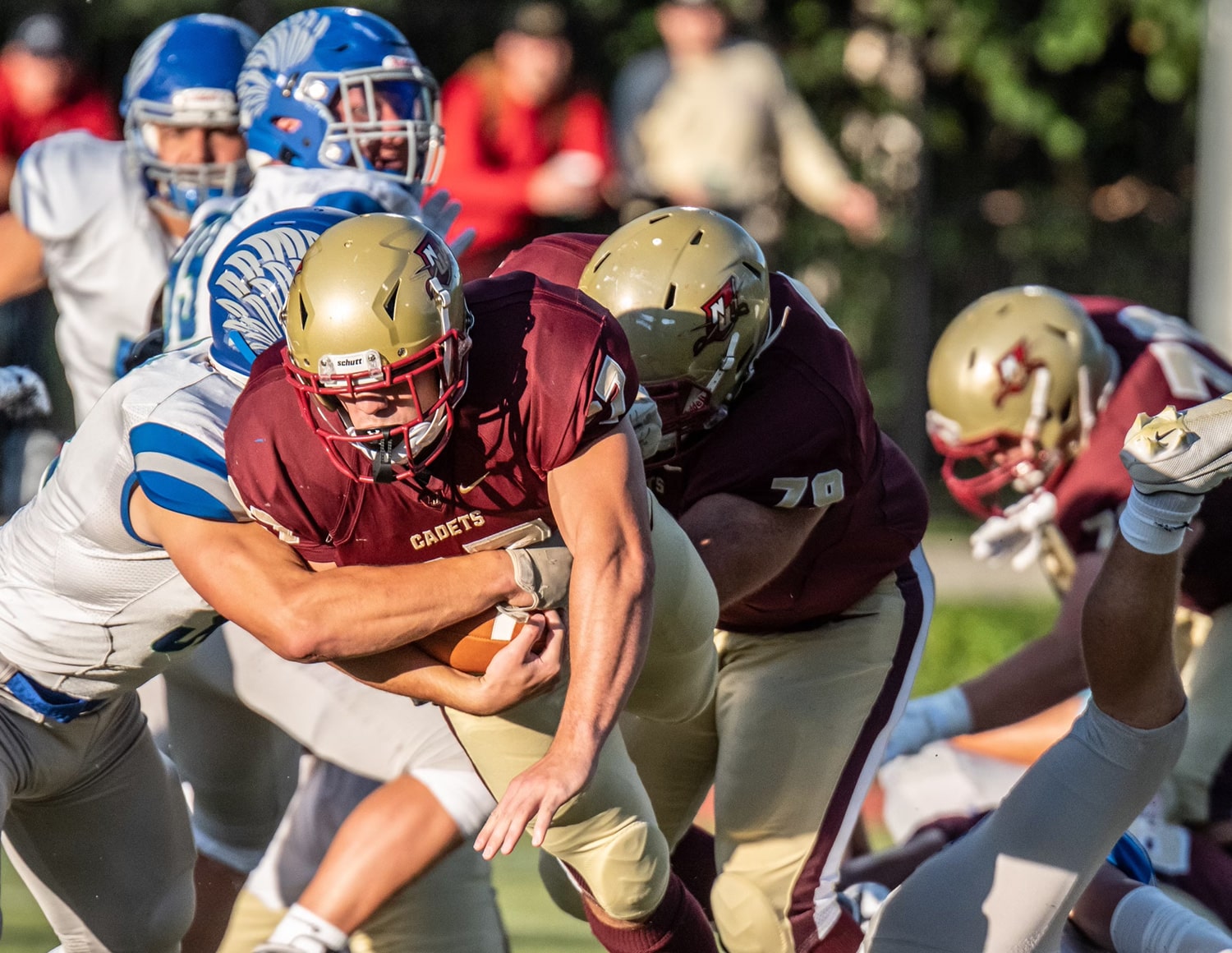 Mauriello, a senior running back, ran around, over and through Norwich’s defense, amassing 261 yards on 34 carries and scoring two touchdowns (on runs of 13 and 17 yards) to lead Salve Regina to a 38-0 win at Sabine Field at Haynes Family Stadium.

The Cadets entered Friday’s 2021 season opener with season-debut pomp (the marchdown by the Corps of Cadets and Regimental Band to Sabine Field at Haynes Family Stadium) and making history. It was Norwich’s first-ever night football game and the first played in front of Dr. Mark Anarumo as president.

The Cadets played Norwich’s first-ever night football game and their first in front of Dr. Mark Anarumo as president.

Salve Regina got its other scores on a 10-yard pass from quarterback Jack Maguire to Pat Travers, an 8-yard touchdown pass from Maguire to Marcelino LaBella and a 1-yard run by Connor Welsh. The Seahawks frustrated Norwich’s offense frequently, forcing nine punts.

Meanwhile, Norwich’s defense showed flashes of excellence, stifling Salve Regina scoring chances with a goal-line stand, led by inside linebackers Patrick Keefe and Zev Motew, on the Seahawks’ opening drive, and with a second-quarter end-zone interception by Jeremy Henault, who made his college football debut. (Henault, a freshman defensive back, finished with nine tackles).

Norwich ran two plays out of the wishbone offense on their opening possession to honor coach Barry Mynter, Norwich’s all-time coaching wins leader, who died in May 2020.

For Norwich’s defense, Motew had a team-leading 10 tackles and junior outside linebacker Joseph Bornes had eight tackles and broke up three passes to complement Henault.

Norwich will visit St. Lawrence in Canton, New York, next Saturday for a 1 p.m. game in the Battle for the Hoffman Cup. The Cadets next home game is at 2 p.m. Sept. 25 against Endicott during Norwich Homecoming Weekend.