To rooks, this is how arrival looked 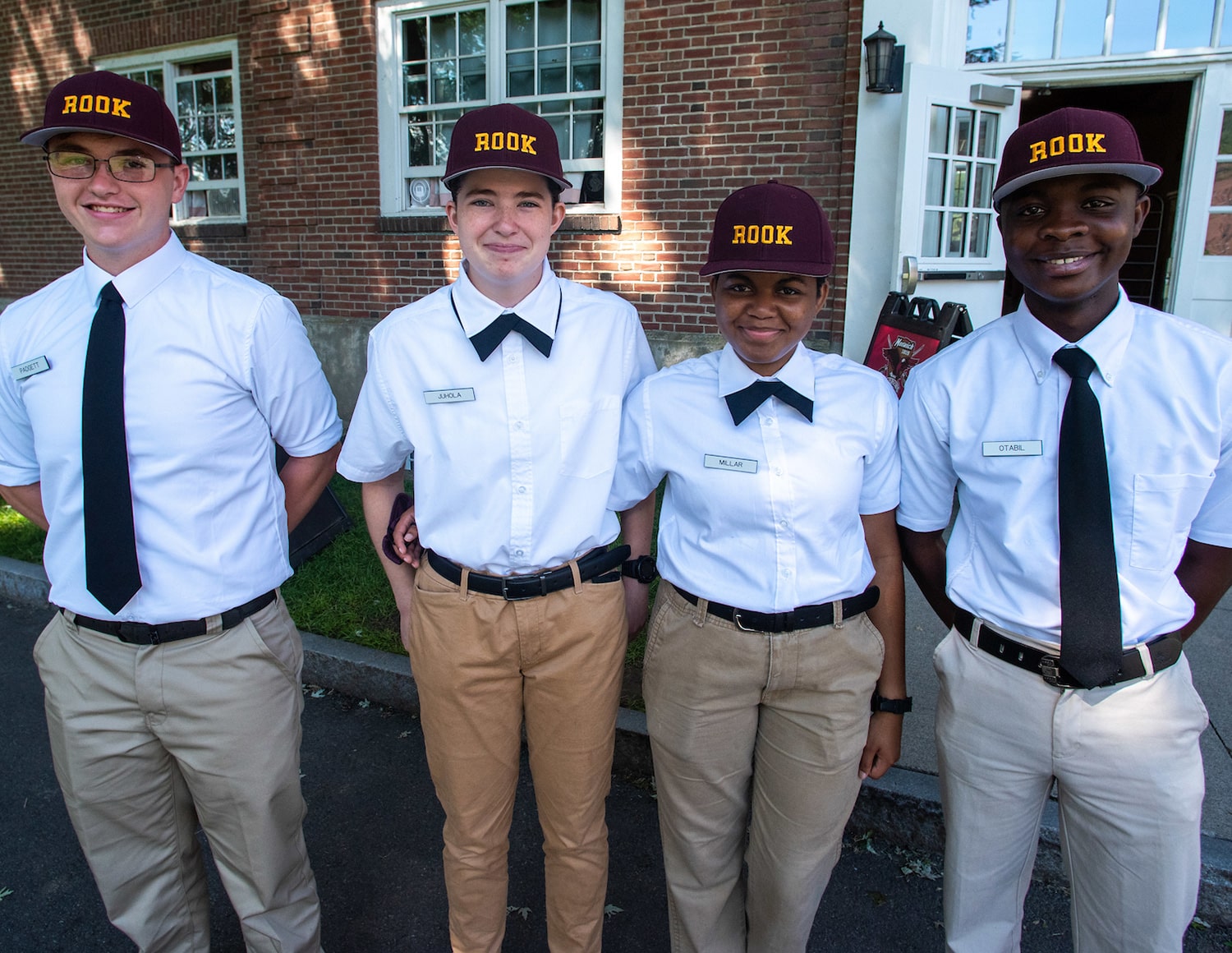 Like red-breasted robins signaling spring, maroon-capped rooks signaled fall at Norwich University. First-year members of the Corps of Cadets arrived in waves on campus in recent days, brimming with excitement and expectation.

ROTC scholarship students came Friday for a group photo and a dinner. On Sunday, Rook Arrival Day, the concrete path circling the Upper Parade Ground filled with cellphone-photo-snapping families and rooks, dressed in those maroon caps and khakis (skirts or trousers) and whites (tops).

Earning a national U.S. Marine Corps ROTC scholarship required a gauntlet of in-person recruiter interviews for Aaron Gamble. Local chats led to a one-day’s-notice meeting a 90-minute car sprint from home. Parents were nervous; he’d earned a driver’s license only a month before. “It was quite the drive. I had to drop everything and run to Massachusetts in a suit … I had to write an essay, I had to get a bunch of letters of recommendations, I had to pass a physical fitness test,” Hurdles await. “I hope I’m able to meet the standard that’s been set for me.”
— Aaron Gamble, Wallingford, Connecticut, English major

Surprises make tests terrifying; so much material, but which questions? Incoming rook Ethan Kay already knew the Corps of Cadets’ physical fitness test’s answers — expect countable feats. “Running, pushups, situps, that’s what’s on the test, so that’s what you’ve got to do.” Kay had visited campus before, but the semester’s flow defied foretelling. “I’m really excited, a little bit nervous. I don’t really know what to expect. … It hasn’t really set in yet that I’ll be here all year.” Seeing the drills was exciting, though. “It’s a great energy around here (and) I’m excited to … get it underway.”
— Ethan Kay, Plattsburgh, New York, criminal justice

The Boy Scouts introduced adventure to Harry Murphy; camping and backpacking became favorite pastimes. Attending Norwich and joining the Corps of Cadets seemed a logical choice. “Sounded like Scout Camp University,” he said. If Murphy seemed unfazed, his mother, Sandra Murphy, knew otherwise; her son had trained hard. “A couple of people have spoken to him about getting physically prepared, which I think he’s done a good job of. But I think he’s downplaying how intense it’s going to be.” She said strong character will carry Harry through: “He has a good insight how, mentally, he has to be prepared.”
— Harry Murphy, Dedham, Massachusetts, biology

Arriving late isn’t the happiest way to start in the Corps of Cadets, but Angel Rodriguez said home traffic in Manhattan, where blaring car horns double as street music, was tough to escape. The U.S. Marine Corps scholarship student learned a time-management lesson. “(The cadre) gave me a talk … and I said, ‘OK. I’m going to continue to do better.’” Rodriguez wants better to define his semester, better grades, better experiences. He eagerly awaited Rook Week’s rigors (unknowns are good) and admired the lush campus lawns. “What surprised me? The grass. I never thought it would be this green.”
— Angel Rodriguez, New York, architecture major

Sophia Righthouse spanned America to come to Norwich University, leaving perpetually sunny California for frigid-in-the-winter Vermont. But the U.S. Army ROTC scholarship recipient was thinking opportunity, not weather, and dreaming of a military attaché career. “Hopefully living in foreign countries and meeting with officials,” she said, adding that she’s eyeing Norwich’s CityLab:Berlin in Germany. In a week on campus, the rook had ridden horses with the Corps of Cadets’ Cavalry and developed a sense of home. “I’ve loved eating at the chow hall, meeting all the new friends.” Her favorite food? All of them. “Everything they make is so amazing.”
— Sophia Righthouse, San Diego, political science major

Once she conquered her first campus hurdle, the Corps of Cadets’ physical fitness test, Jasmin Mann figured she’d be ready for Norwich University, as much as anyone awaiting rookdom and U.S. Marine Corps ROTC training could. The ROTC scholarship recipient said the U.S. Navy’s preparatory school accepted her, but she chose Norwich for its fit. She was imagining drills and raised voices. “I expect a whole bunch of yelling at me,” she said. “And camaraderie between me and the other rooks.” Rookdom brought bonding chances and quirky surprises. “I’m not allowed to use certain steps,” Mann said, laughing softly.
— Jasmin Mann, Virginia Beach, Virginia, psychology