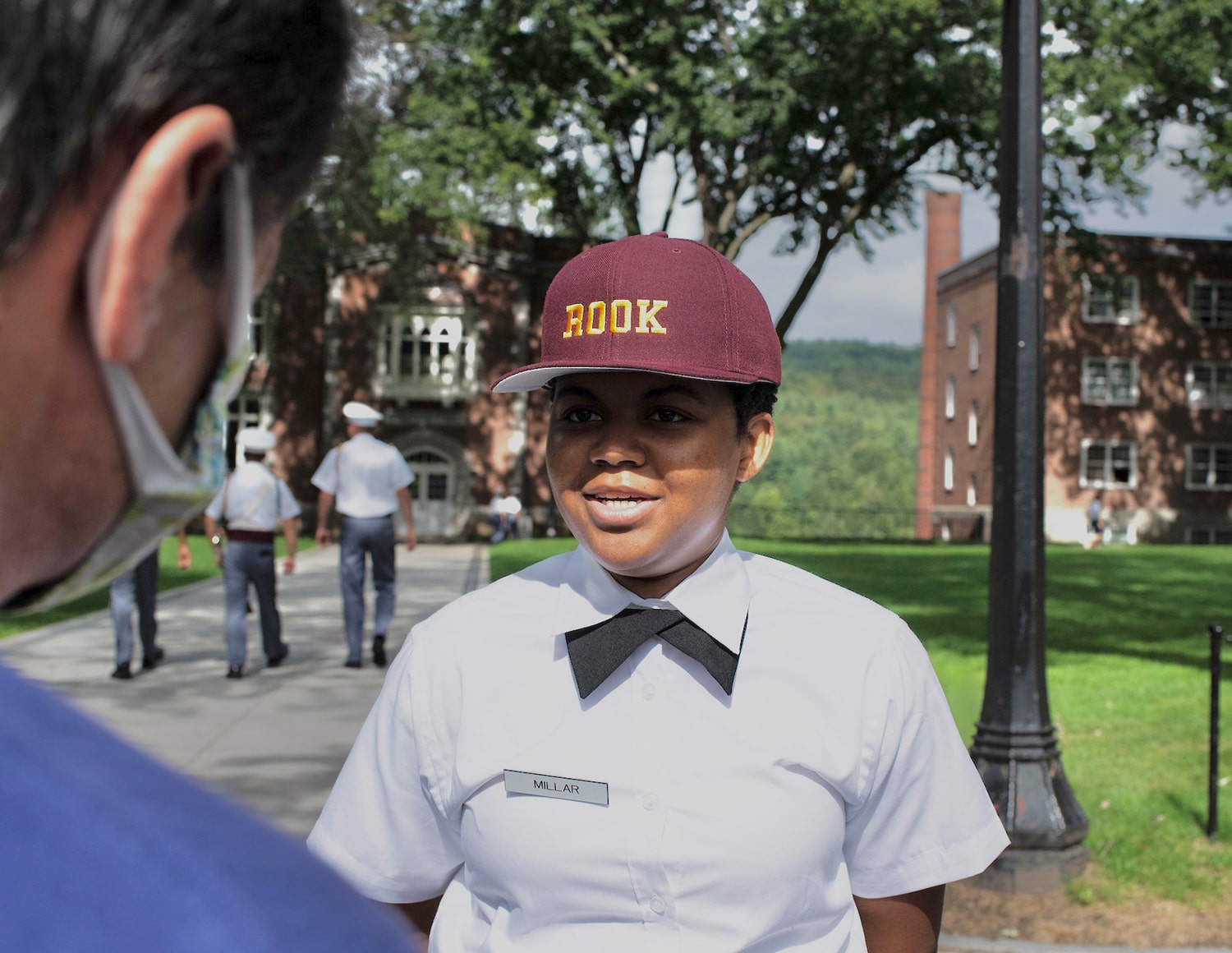 Yoomide Millar’s path to Norwich University starts with a Port-au-Prince, Haiti, airlift on a C-17 U.S. Air Force jet and continues with a realized wish.

On Jan. 12, 2010, a 7.2-magnitude earthquake ripped through Haiti, Millar’s native country; the U.S. Geological Survey put the epicenter about 78 miles west of the capital of Port-au-Prince. The quake and its aftershocks killed more than 200,000 people, and, by the United Nations Children’s Fund’s count, orphaned more than 20,000 children, including Yoomide, then 7.

To save some of the orphans, U.S. and Haitian authorities expedited about 900 visas, Denver magazine 5280 reported. Then-Colorado Gov. Bill Ritter arranged to have 32 Haitian children, ages 2 to 12, brought to Denver from Florida, where the Air Force had brought them, for adoption by local families.

As the Vail Daily reported, the children arrived in Florida on a U.S. military flight from Haiti, where they’d slept in tents after the quake reduced their orphanage, Maison des Enfants de Dieu, to rubble. The Denver Post said Colorado parents learned the tent orphanage was without food or water for five days.

“This is the mercy flight now,” Ritter, a Democrat, told Denver television station KUSA in January 2010.

Yoomide arrived in America on Jan. 24, 2010, wrapped in a blanket with her 10-year-old brother Wistanley in tow, said Allison Millar, who with her husband, Ian, adopted them to live in their then-home city, Colorado Springs, Colorado. Allison Millar said she’d heard on the news how the earthquake had wrecked Yoomide’s orphanage and how some of the orphans were bound for foster care in America.

“I said, ‘No way,’” Allison Millar said, recalling the moment. “We’re all parents, we’re all in the adoption process. You can’t take the children.”

The Vail Daily reported that at Ritter’s behest, United Airlines routed a 757 jet to Orlando, Florida, to pick up the kids for free. Colorado doctors, social workers and volunteers flew with the children and helped them off the plane. The Post reported that some children had to be carried off while others crossed the tarmac themselves to greet awaiting adoptive families.

“She got off the airplane after she’d been evacuated and she had some really horrible clothes that someone had given all the children, and a blanket,” Allison Millar said. “And that’s all she had.”

The Post reported that the Millars had waited three years to adopt a child.

“This has been a long, long journey,” Ian Millar told the Denver Post. “Waiting for the last two weeks has been excruciating.”

Yoomide and Wistanley moved in with the Millars in Colorado Springs, where Allison Millar would homeschool them. As she grew up, Yoomide said she remembered the Air Force personnel who’d whisked her to safety and dreamed of joining them.

“Since (the evacuation), I always had the love for the Air Force, and when I was looking at colleges, I wanted to join the Air Force and I wanted to join an ROTC program,” Yoomide said Sunday, as she stood by the Upper Parade Ground in her rook arrival uniform — white blouse, khaki skirt, maroon ROOK baseball cap. “And I found out about Norwich and the Corps of Cadets and I knew it was going to be better for me to join (it).”

On Sunday, just as she’d dreamed, just as she’d planned, she enrolled in Air Force ROTC and at Norwich, surrounded by sometimes traipsing, sometimes marching packs of uniformed upperclassmen and maroon-capped rooks. She said she’ll seize her chance.

“I’m not going to quit,” Yoomide said, adding that she’ll major in computer science. “I don’t know what to expect, but I’m ready to meet the challenges. … I want to try my hardest and know that I did my best.”

Ian said the Air Force Academy told Yoomide she could reapply, but would have to wait a year. Yoomide said she didn’t want to wait and chose Norwich for its purposeful, serious atmosphere.

Allison, Ian and Yoomide moved to Brookfield, Vermont, six weeks ago as Yoomide readied for university. Yoomide is the Millars’ youngest child. Their other children are having their schooling (Wistanley is at university in Bonita Springs, Florida) or had it, married and started families.

Familywide armed forces links made Yoomide’s Air Force pursuit natural, Allison Millar said. One of her sons-in-law is in the Air Force; one is in the U.S. Army.

“We’re really, really proud of her,” Ian said in near unison with Allison. “She’s worked really, really hard to get here. She’s been dedicated to her studies … to really excel. For her to get accepted here, we were really amazed.”

The Brookfield house will feel different with Yoomide gone, Allison said, recalling how the thought recently brought her to tears.

“When we were bringing her in last week, I was up in her (Norwich barracks) room and I realized she’s got all this stuff we’re unpacking,” Allison Millar said. “And I just stood there and I couldn’t hold it any longer.”