Where there’s croak, there’s ire (or at least frustration) 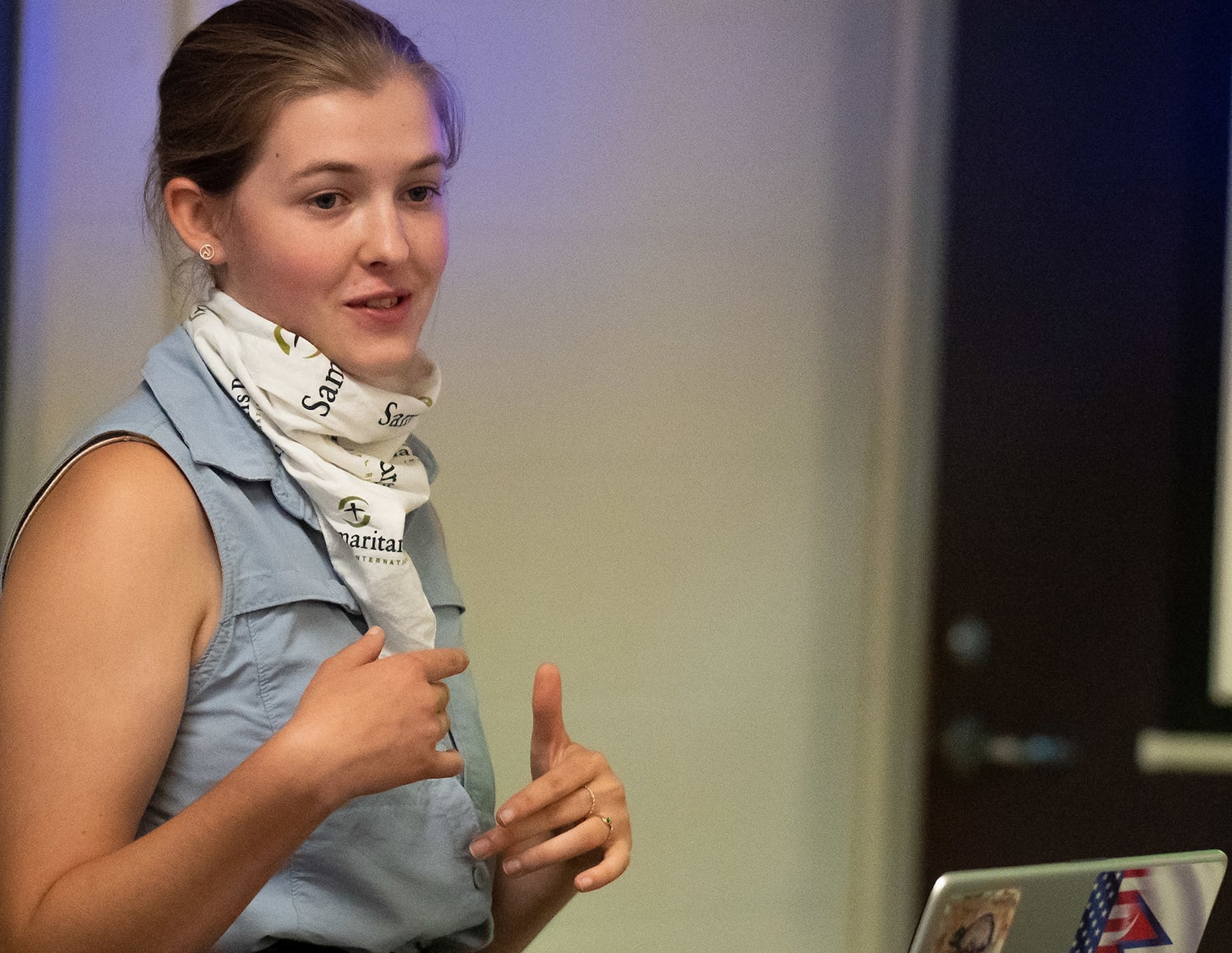 At Vermont Disease Ecology Conference, researchers discuss experiment roadblocks, and how they were overcome

Norwich University biology major Reine Gibb, like all scientists, expects experiment hiccups. Although faulty hypotheses or errors surely stall research, she learned unwilling subjects can, too — especially if they hop away.

“I did catch one. And the success lasted about two seconds, and then he got away. … We had no success after that. You’d get near them and hear them just taunting us.”Reine Gibb, rising senior biology major, Norwich University

To explore one potential experimental route, Gibb spent a summer afternoon on Baker Pond in Brookfield, Vermont, hoping to catch frogs to serve as potential trematode hosts. (They needed frogs, she said, because snails can’t become infected from other snails.) After a shore search was fruitless, Gibb, a civilian student, joined Neal in canoeing cross-pond and exploring the far shore.

Gibb thought she found a specimen.

“I did catch one,” she said. “And the success lasted about two seconds, and then he got away. … We had no success after that. You’d get near them and hear them just taunting us.”

Seventeen presenters gathered for the conference, which Neal organized with the Vermont Biomedical Research Network (formerly the Vermont Genetics Network), and had last met in-person in 2019.

Participants for the 4-year-old conference came from Middlebury College, Dartmouth College, the Vermont Fish Health Lab and the University of Vermont. Norwich had three biology majors, graduate Macall Meslin, Gibb and Reed at the conference; other schools sent molecular and wildlife biology majors.

Presentations covered malaria’s deadliness to wildlife (particularly loons), trout-attacking herpesviruses, Lyme disease and cyanobacteria, aka blue-green algae, which are famous for multiplying wildly and sometimes sucking away enough oxygen to kill off fish and plants.

Neal said the conference has grown each year it’s been in person (having shrunk during its 2020 virtual version) and that the relaxed, congenial atmosphere let participants broaden knowledge, sharpen presentation skills and build networks.

“It gets more of us aware of what research is going on close by, who are our potential collaborators, what supports we could provide to each other,” she said. “Having connections with different researchers who are in different stages of their careers is always really helpful for finding graduate positions. And undergraduates can see what different stages of the career path look like.”

Also, Neal said, students network with other students to see what they’re researching and how they might be pursuing graduate studies, discussions that are easier in person than over Zoom.

Reed, who transferred to Norwich from the University of Rochester in New York state and who, like Gibb, is a civilian student, said Neal pushed her to design her project. Reed asked the questions, researched the background and ran the experiments.

“It’s been a huge exercise in critical thinking and problem solving,” said Reed, who debuted as a Norwich presenter and an overall presenter, facing her first audience of scientific peers. “I absolutely learned a lot … sometimes I think I forget how big biology as a whole is. This one conference is disease ecology, which sounds pretty specific, but there’s been such a huge diversity in the presentations. It’s ecology, but we’re also hearing about parasites, and microbiology and genetics, and it’s just tying them all together, which is really cool.”

With Norwich I-will-try sticktoitiveness, Gibb improvised. She and her crew gathered considerably stiller ostracods, tiny crustaceans also known as seed shrimp, which serve as an intermediate host for the parasite found in snails and frogs.

“We looked up all this sophisticated equipment, but all it took was a bucket to scoop up some sediment,” she said. “They were superhappy in their little beaker … and they lived quite well in the lab for at least a week or two.”

She hadn’t given up on the amphibians.

“We’re still hoping to catch some frogs,” she said.