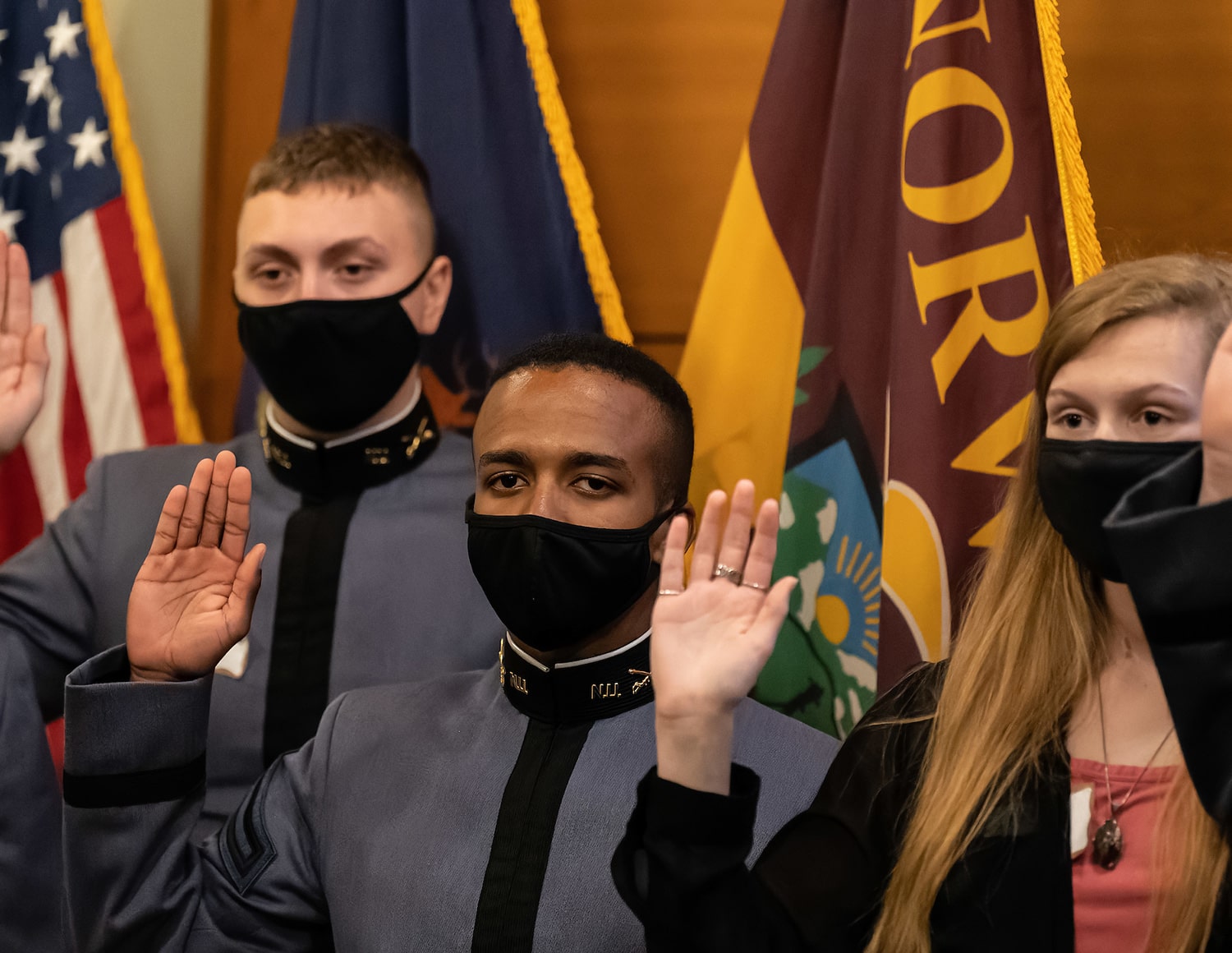 The coming semester offers a fresh start both in academics, with new books and professors, and socially, with many new faces. The Student Government Association’s leaders want to unify peers so long separated by the coronavirus pandemic.

In late April, shortly before Commencement, the Student Government’s Administration installed its 2020-21 leadership team at an in person (if physically distanced) dinner. David McQuillan, who won the association presidency in a whisker-close online vote, introduced his executive cabinet — Vice President Courtney Rogat and Treasurer Joseph Collette. All three officers are in the Corps of Cadets.

“One of the biggest things I’m going to be pushing for with the administration is to bring us back in the most normal way possible.”David McQuillan ’22, Student Government Associaiton president

McQuillan, a rising senior, political science major and U.S. Coast Guard enlistee from Vernon Township, New Jersey, joined the Student Government Association as soon as its constitution allowed — after Corps of Cadets rookdom as a freshman. (Civilian students can join in the second semester of their freshman years).

McQuillan said the 17 senators is a record count for the Student Government Association, yielded by energetic recruiting and a robust online election cycle. (The full Senate has 24 slots, six for each class — three Corps, three civilian.)

McQuillan hopes to carry the momentum into the new year, bolstered by adviser Michael Kelley and a strong relationship with President Dr. Mark Anarumo. McQuillan said Anarumo has invited student government representatives to serve on committees and join talks on campus policies.

McQuillan, Rogat and Majid all called a safe campus reopening a top priority. McQuillan said he and his student government colleagues would learn from coronavirus-shaped 2020-21 when plotting strategy.

“Students have a pretty good idea of how campus reopening can happen,” McQullan said. “One of the biggest things I’m going to be pushing for with the administration is to bring us back in the most normal way possible.”

“When things are being discussed that will affect the students,” McQuillan said, “shouldn’t a student be in the room?”

Majid, a business management major from Piscataway, New Jersey, said he wants to ensure clubs, including the Pegasus Players and sports clubs are funded and functional, which he said will boost morale.

“Being better will bring glory to Norwich,” he said. “And will make Norwich’s name more well known and hopefully attract alumni, and others, to donate when they see the school that they love is doing great.”

Rogat, a chemistry major from Minneapolis with a U.S. Air Force contract, said she’ll push for unity and better campus life. She hopes to plan events to gather students and bolster pandemic-frayed ties. She imagines movie nights, a paper lantern release and a festival with music and games.

She said the association will leverage social media, especially Instagram, to rally peers and effect the change they want to see.

“It happens a lot where people see something wrong and just complain about it and complain about it and they don’t do anything to change it, and that really frustrates me,” she said. “Being able to enact these changes, or least set them in motion … does far more wonders than complaining.”

McQuillan said he hopes to restore a committee that met regularly in Jackman Hall and included the university president, provost, residential life coordinator and athletic advisory leaders along with the regimental commander and student government leaders.

“Everything needs to be focused … on Norwich Together,” he said. “I really want to embody that and I think it’s the responsibility of student government to see it through.”