Getting inside criminal minds, however they wind 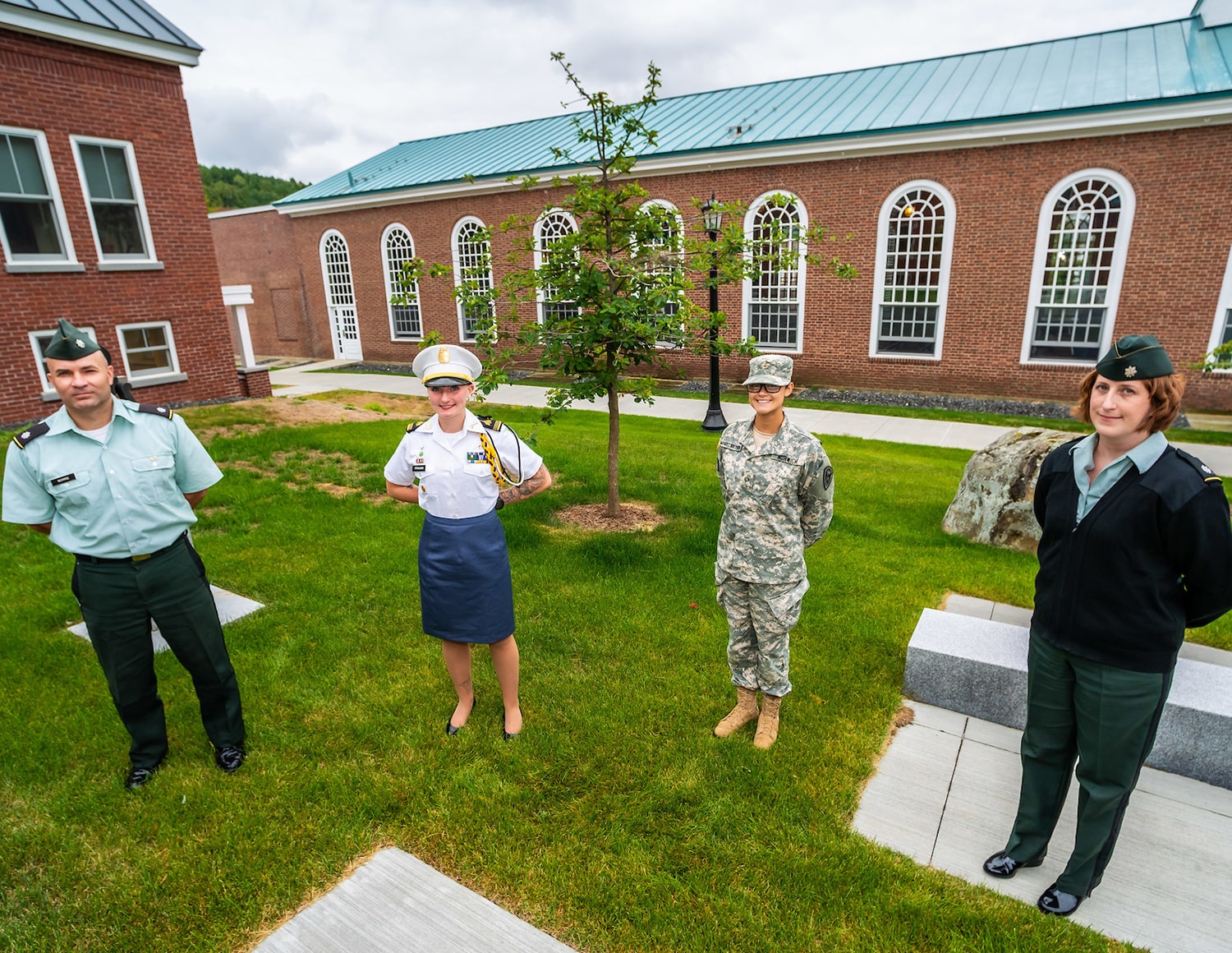 They aim to show students just how much wider through new courses in environmental criminology and criminal intelligence, topics for which minors are planned; and criminology, which incorporates law, psychology and sociology and examines human behavior, interaction and organization, for which a new major is planned.

Criminal justice focuses on “whats” and “hows,” what constitutes a crime and how crimes are stopped; criminology, the scientific study of crime as a social phenomenon, focuses on “whys.”

“This past year, we’ve been focused on our identity; our current identity and our future identity,” Morris said in May. “(The School of) Justice Studies and Sociology didn’t describe who we are. Criminal justice is one domain and criminology is another. But both Elizabeth and I are criminologists (as is Norwich University President Dr. Mark Anarumo.)”

Although the school’s primary study areas, criminology and criminal justice, have parallel elements, they’re distinct, the professors said. Criminal justice focuses on “whats” and “hows” — what constitutes a crime and how crimes are stopped (through investigations and arrests) and how criminals are punished (through charges, trials and sentences). Criminal justice has three primary components —  law enforcement agencies, courts and the correctional system.

By contrast, criminology, the scientific study of crime as a social phenomenon, focuses on “whys.” Criminal justice officials might respond to a spike in homicides by stopping perpetrators and preventing more homicides. Criminologists, however, might study economic, sociological and psychological factors underlying, and perhaps triggering, the homicides.

Gurian said the School of Criminology and Criminal Justice  has recently hired professors who are educationally trained as criminologists and who developed courses taught with a criminology bent (e.g., drugs and society or theories of justice). The new professors, she added, also helped students explore offender behaviors through undergraduate research and apprenticeships, experiences that paved entry to graduate and law schools.

Norwich offered its first-ever criminal intelligence course in spring 2021, partnering with International Business Machines Corp. to use i2 software, which integrates components from the company’s operations, intelligence analysis and policing products.

In a statement, IBM said i2 helps simplify a host of tasks, including data consolidation and storage; information discovery, sharing and reports; threat tracking and disruption; crimimal profiles for businesses and people; crime series and crime pattern detection; and probation and parole monitoring.

Computer World reporting suggests police and military have used i2 for a decade. The magazine in 2011 reported that the Boston Police Department and the Orange County, California, Criminal Justice System share criminal data through i2’s Coplink platform and that defense contractor Northrop Grumman Corp. integrated i2’s Coplink into a system for the U.S. Navy to track criminal information from multiple sources.

Birth of a program

LEEP, linked to the federally created Law Enforcement Assistance Administration, gave grants and loans to law enforcement or criminal justice students at almost 1,000 U.S. junior colleges, colleges and universities. The loans were to be forgiven if the students who received them later worked for a specified period for a publicly supported law enforcement or criminal justice agency. (Students who didn’t pursue such work were to repay the grants or loans with interest.)

Financial disarray doomed LEEP. A 1980 comptroller general’s report showed that although the program had granted $278 million, only 18% of recipients had repaid them. President Ronald Reagan’s administration abolished LEEP in 1982.

Norwich established its criminal justice program in the mid 1970s as a two-year associate degree program under the Vermont College division. Although criminal justice first appeared in the 1974-75 course catalog, a March 1973 president’s report to trustees suggests the program was expected to launch in the 1973-1974 academic year.

In 1985, Stanley Shernock, Gurian and Morris’ predecessor, began leading the program with Max Schlueter. They aligned Norwich’s offerings with other major criminal justice programs by adding a social sciences focus.

In 1987-88, a Department of Justice Studies and Sociology, led by Shernock, was included in Norwich’s Division of Social Sciences. Schlueter, Robert Michael Paolini and William Clements, now the dean of Norwich’s College of Graduate and Continuing Studies, were faculty.

As the College of Graduate and Continuing Studies noted in a 2013 article, Shernock boosted the Norwich program’s profile by securing Police Career Incentive Program certification from the Massachusetts Higher Education Department. He said Norwich was one of the first 14 programs to be certified out of 46 applicants.

The incentive program, launched in 1970, is also called the Quinn Bill for its sponsor, former Massachusetts Attorney General Robert Quinn. It tied pay raises for Massachusetts law enforcement officers to points accumulated while working toward bachelor’s and master’s degrees.

Norwich University ended its two-year criminal justice degree program in 1987 and established a new, separate Criminal Justice and Sociology Department. Shernock, who earned a Charles A. Dana professorship, retired from Norwich in spring 2020 after 30 years at the university. He added courses in restorative justice, victimology, civil liability and criminal justice ethics to the curriculum.

“Sometimes, when we talk about criminal justice (those topics) aren’t on people’s radar,” Morris said. “But it’s squarely within our discipline. … And we’re forecasting that these issues are not going away.”

Morris called criminal intelligence, environmental criminology and a third topic, disparities and divergences in criminal justice, forward-thinking and relevant. Studying inequities in corrections, courts and policing, he said, is especially relevant given the recent heightened attention to social justice (e.g., Black Lives Matter) in criminal justice systems in the United States and abroad.

Morris added that jobs are growing in all three study areas. Particularly, he said, there’s a national, and international shortage of professional criminal intelligence analysts who study criminal data to identify possible trends, relationships or connections among disparate crimes.

“The need is big,” he said, “and there’s not necessarily a (talent) pipeline to fit those areas.”

Gurian added that criminology, which includes aspects of law, psychology and sociology, fits Norwich’s interdisciplinary learning tradition and that criminal justice graduates may become many kinds of nonpolice professionals — social workers, lawyers, city administrators — and work in many places. A parade of Norwich graduates has  landed at “three-letter” Washington agencies — the National Security Administration (NSA), the Drug Enforcement Agency (DEA), the Homeland Security (DHS) and Alcohol, Tobacco and Firearms (ATF) departments and the FBI.

The School of Criminology and Criminal Justice plans to partner with the College of Graduate and Continuing Studies on “four-plus-one” programs to let students earn bachelor’s and master’s degrees in criminal justice and criminology in five years instead of the traditional six.

Because Norwich has many alumni working in those agencies, Gurian said, students will get to tap them as classroom guests or cultivate them as network ties. The school’s 13-member staff also leverages its networks. Gurian said she got advice for Norwich’s environmental criminology course from a friend who was leading a wildlife crime initiative at the United Nations’ Drugs and Crime Office in Vienna.

Beyond undergraduate offerings, Morris and Gurian, who joined Norwich’s faculty in 2011 and enter the second year of three-year terms leading the criminology school, said they plan to partner with the College of Graduate and Continuing Studies on “four-plus-one” programs. These plans will let students earn bachelor’s and master’s degrees in criminal justice and criminology in five years instead of the traditional six.