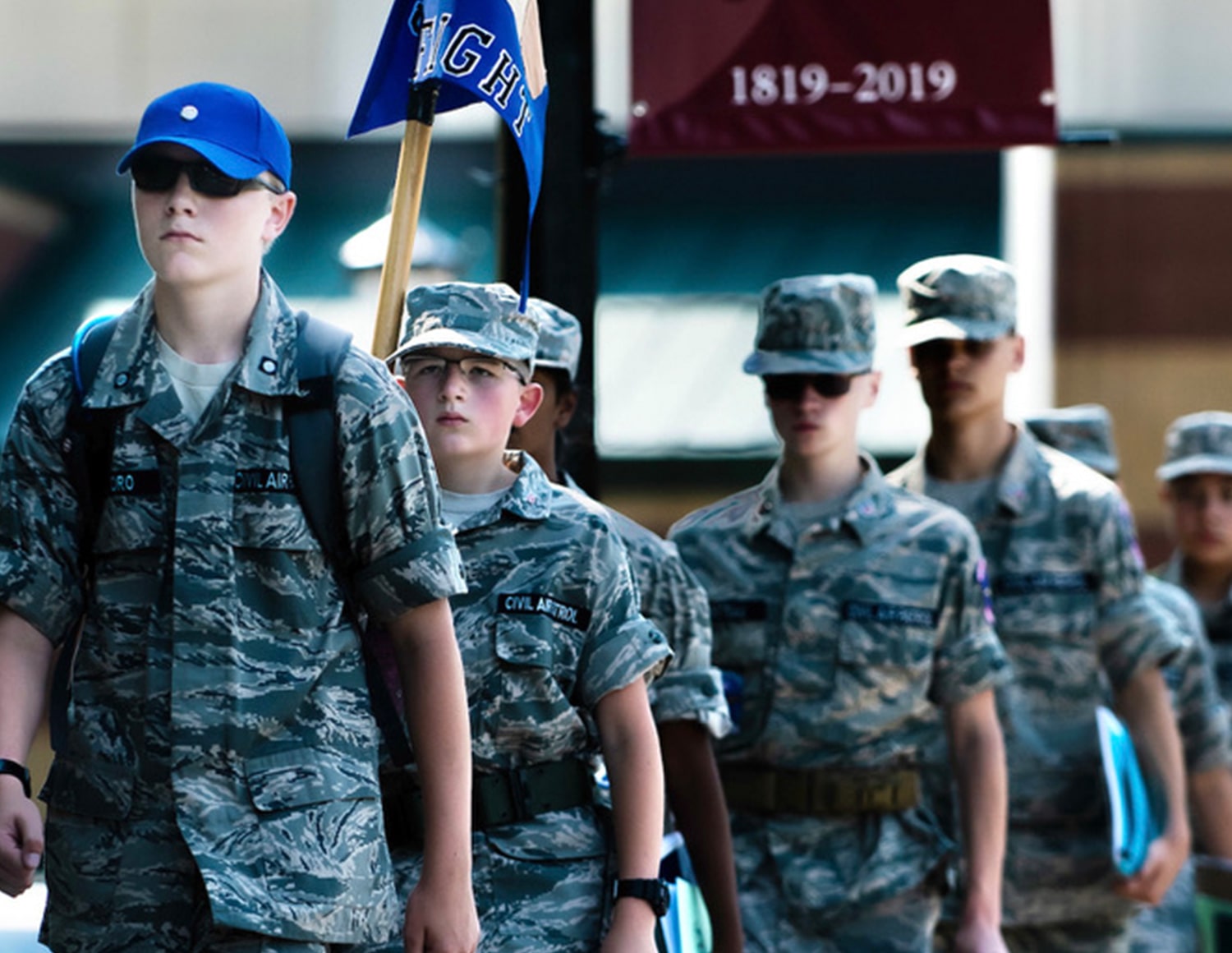 Norwich University’s cadets, ROTC and Corps, are about a month and a half from arriving on campus. But this past week, as it has since 2007, the Civil Air Patrol’s New Hampshire Wing put its cadets through paces on the Upper Parade Ground and around campus.

“I try to challenge cadets to get everything they can out of CAP, because it has so much to give and it puts them in good places to get what they want for the future.”Josiah Boggs ’14, former Civil Air Patrol cadet

The 2007 camp included a Basic Encampment and a Ground Team Training School.

“Everything about holding the encampment at Norwich was terrific,” Lt. Col. Robert Shaw, a Norwich ambassador who was then the wing’s cadet programs director and emergency services training officer, said in a story from the Civil Air Patrol’s 2018 spring newsletter that was also posted online.

The newsletter story said the Civil Air Patrol’s 2007 camp at Norwich succeeded smashingly, leading to its long continuation and the start of a Norwich University scholarship for Civil Air Patrol cadets. (The $20,000 scholarships pay $5,000 per year for full-time residential students.)

In the past decade, Norwich has enrolled two of the Civil Air Patrol’s highest achievers, recipients of the Gen. Carl A. Spaatz Award. Since its 1964 debut, the Spaatz Award has gone to fewer than 2,400 cadets, or less than 0.5% of all cadets.

The award is named for Carl “Tooey” Spaatz, the U.S. Air Force’s first chief of staff, who commanded the Allied air campaign against the Nazis in World War II and the atomic bombings of the Japanese cities Hiroshima and Nagasaki.

Josiah Boggs, who attended Norwich from 2011 to 2016, and graduated with a physics degree, received the Spaatz Award in January 2014. He’s now a U.S. Navy aviator.

“As a cadet, I squeezed everything out of CAP that I could,” Boggs told Civil Air Patrol writer Jennifer Gerhard, an Air National Guard public affairs officer, for the 2018 Civil Air Patrol newsletter article. “I try to challenge cadets to get everything they can out of CAP, because it has so much to give and it puts them in good places to get what they want for the future.”

In a 2019 norwich.edu interview, Fockler said his Civil Air Patrol experiences, and winning the Spaatz Award, readied him to pursue new ambitions, including working toward an Air Force commission and leadership chances in Norwich’s Corps of Cadets.

Jayson A. Altieri ’89, a retired U.S. Army colonel who is now a professor at the Air War College, Maxwell Air Force Base, Alabama, served on the Civil Air Patrol’s Board of Governors from 2012 to 2018. At Norwich, he’s served on the Board of Fellows and Bicentennial Committee.

In the Civil Air Patrol in the late 1970s, Altieri was a ground team leader with the Virginia Wing’s Roanoke and Blacksburg composite squadrons. In an email, Altieri wrote that CAP introduced him to the military lifestyle and the service-before-self ethos and availed him of community service opportunities. The lessons have lasted, he said.

“I was fortunate that many of my military career paths mirrored by experiences in CAP,” Altieri wrote in an email. “From learning to fly an airplane when I was 16 years old to leading a search team to find a missing person in the mountains of western Virginia, what I learned as a CAP cadet still resonates with my past duties as an U.S. Army Officer and NCO and currently as an assistant professor at the U.S. Air Force’s Air War College.”