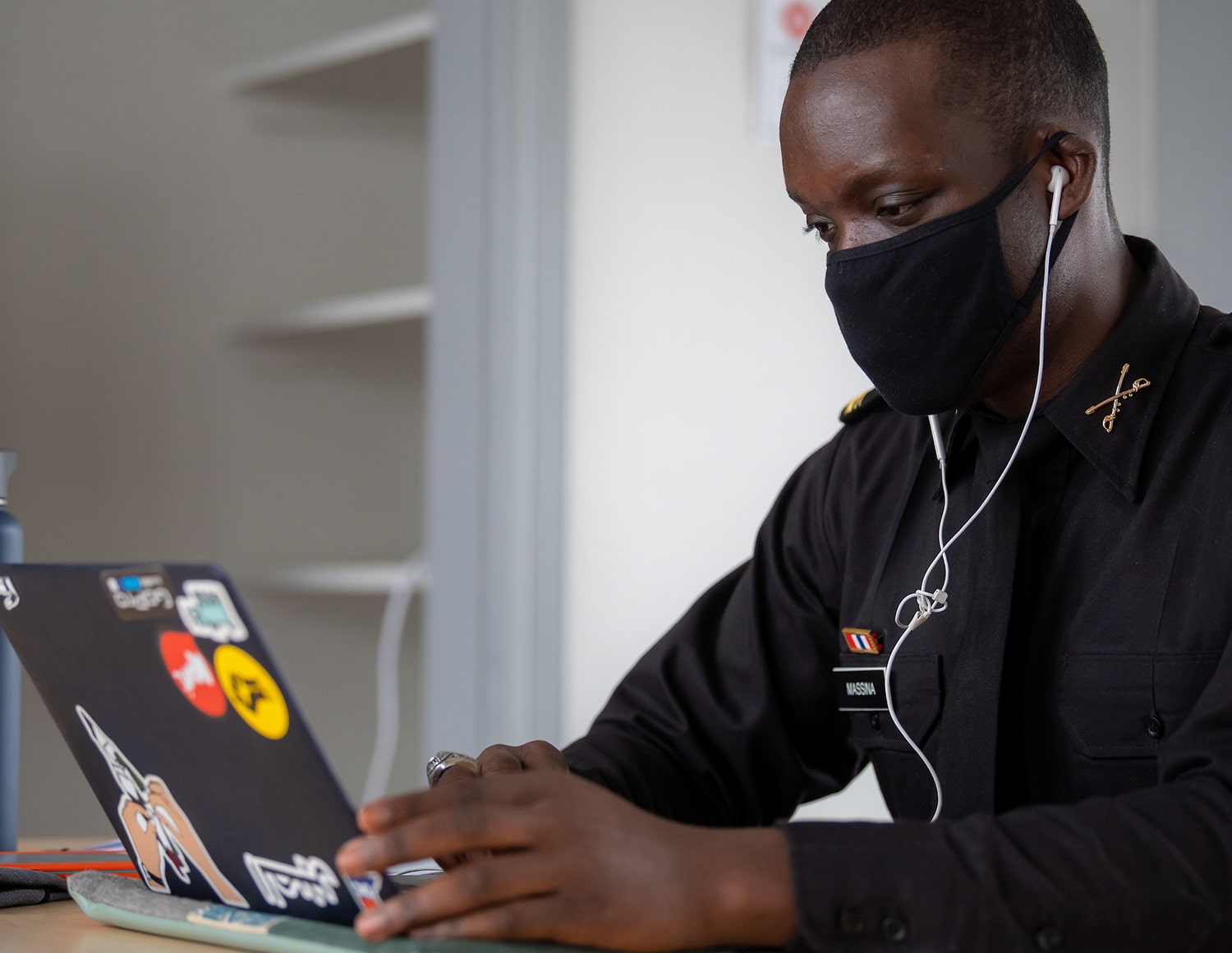 By mantra and by tradition, Norwich University students stare down tomorrow’s challenges today, applying learning from a host of disciplines and experiences. Among the most looming hurdles Generation Z will face is coping with global warming and its ancillary fallout, including potential military conflict.

Receding ice in the Arctic has opened new travel channels and prompted Russia and China to expand military infrastructure, which has prompted warnings about rifts and competition between those nations and the United States. A group of Norwich student researchers spent the semester researching Arctic economy, science and security through the Arctic Triad project.

Cooperation between Norwich University, the University of Alaska Fairbanks Center for Arctic Security and Resilience, and the Royal Military Colleges of Kingston, Ontario, and Saint-Jean, Quebec, and sponsorship by Fulbright Canada also enabled the triad, which ran virtually because of the coronavirus pandemic.

The triad included the Arctic Forum workshop; a simulation; and an engagement paper. In October, the student researchers will present their findings to an international audience at the Norwich University-hosted International Symposium of Military Academies, aka ISOMA.

Here are the students’ reflections on the triad, edited for clarity and length.

My time at the Center for Global Resilience and Security provided me with so many opportunities to grow academically and diversify my knowledge across many fields. I started as a fellow in February 2019 and from the beginning, was exposed to research on the Arctic as the next cold rush. The fellowship was an amazing way to explore food security, and I knew it would prepare me for the undergraduate summer fellowship.

In my third semester, which was virtual, I and the center’s other research fellows spent 14 weeks researching the Arctic Council from a diplomatic point of view. Our group participated in a simulation, a summit and an engagement paper in partnership with other military schools.

We learned to adapt in the simulation by using the body of knowledge we created in our research, and benefited from having a brief on deterrence basics from the United States Strategic Command, or Stratcom. We came away understanding that deterrence was a psychological way to project strength to the enemy.

Next came the Arctic workshop, which had students participate in panel discussions and break into groups to explore specific topics. I was in the political group; my research helped me understand the dynamics.

My fellowship helped strengthen my research skills and helped me learn to work in multidisciplinary way. I will continue to encourage students to apply for the Center for Global Resilience and Security Fellowship, as being a fellow was, and is, a valuable experience.

In February, a U.S. Strategic Command representative met with me and the rest of Norwich University’s Arctic Simulation Team to inform us about strategic deterrence, global strike and the Global Information Grid, the Defense Department-managed system for collecting, processing, storing, disseminating and managing information on demand to warfighters, policymakers and support personnel.

As a peer astutely pointed out, Stratcom conducts psychological evaluations for reasons that will ultimately deter enemy forces or threats. As a psychology major, I found this very interesting, but wanted more information. I also hope there will be more internship and job opportunities for students who want them. It is important for people who are not pursuing military careers to be introduced to federal job opportunities.

Fredriksen was my favorite speaker. I enjoyed hearing what he had to say about the importance of Russia and Norway’s complex relationship. Since the nations are neighbors, Fredriksen said, they need to work together to keep a peaceful relationship.

Many other speakers discussed the importance of a fact-based knowledge approach when discussing the Arctic and the need to follow the science. The other forum participants were from different countries, so they shared their views on the United States’ past and previous stances on climate change, which was very interesting to hear. There were two panels full of members who have spent their careers studying the Arctic, and it was fascinating to hear about their passions and the policy or lifestyle changes they believe should be made to protect the Arctic.

In Spring 2021, I had the amazing opportunity to be one of Norwich University’s Center for Global Resilience and Security Environmental Security fellows. I jumped at the opportunity to apply because in the fall I’d taken an environmental sustainability class that sparked a desire to learn more about how we, as humans, are affecting the planet and what we can do to reverse climate change.

This past spring’s Center for Global Resilience and Security fellowship had me spending hours researching the Arctic’s science and security and perhaps finding a new career path.

I now know much more about the Arctic than I ever did. I enjoyed the weekly meetings where we got to present what we were reading and learning and I enjoyed presenting research at outside events such as the simulation with the Canadian teams. It was great getting to work with other students; it was fun to talk, even if over a screen.

Also, through this research, I reevaluated my biochemistry degree and what I could use it for. I realized that I could potentially become a biochemical climate scientist and focus on the changing world we live in.

For the Arctic simulation, after putting in numerous hours of research and work into my topic (science, security and the Arctic nexus), I thought it was very cool to see a real-world connection to all of it.

After conducting research in the Olmsted fellowship in (2019)  and having COVID-19 cut our research short, I was excited to conduct research through the Center for Global Resilience and Security again. I got a content area that I found fascinating — Canada’s perspective on Arctic Security — and a job area that I knew well from being in the same position before.

Before I started this semester, I had zero knowledge of Arctic security, and I learned much about this area in such a short time. There is much going on in the world. Without applying yourself or researching things on your own, you can become completely oblivious to what’s happening outside of the United States that could affect you.

Key things that I learned in this fellowship were conducting research and providing my results to benefit a team of people. The most significant learning experience for me was the morning meeting, where we were given set information and had to work as a team to answer research questions in a short time. This helped me sharpen my critical thinking and problem solving.

My research fellowship topic this semester was the nexus between cyber and economics in the Arctic; I was my team’s administration officer. It was hard to find sources relating my research topic directly to the Arctic, but this just meant that I had to work on my critical thinking to come up with connections.

My favorite thing about the fellowship this semester, besides the events that we participated in, was getting to present our research to our mentors every week. I enjoyed getting feedback and using that feedback to plan what my research for the next week would be. I also really enjoyed that we got to interact with the Canadian team. We worked well together, and I felt supercomfortable around them; they really helped me in moments I needed some guidance on my writing. Overall, I believe the team did a good job. We learned a lot and I hope we left a good impression. I am sure we will be proud of the engagement paper.

The Arctic Triad was a great learning opportunity; I was a part of the security group. It was really inspiring to hear from people that call the Arctic home. My favorite part of this event was the breakout rooms and I really enjoyed meeting people who had been researching similar topicsand hear their points of view.

Then there was the simulation, a very interesting event. I got a very good image of what the diplomatic process looks like in an Arctic Council meeting. I learned not only about the Arctic, but also how to debate effectively and present viewpoints.