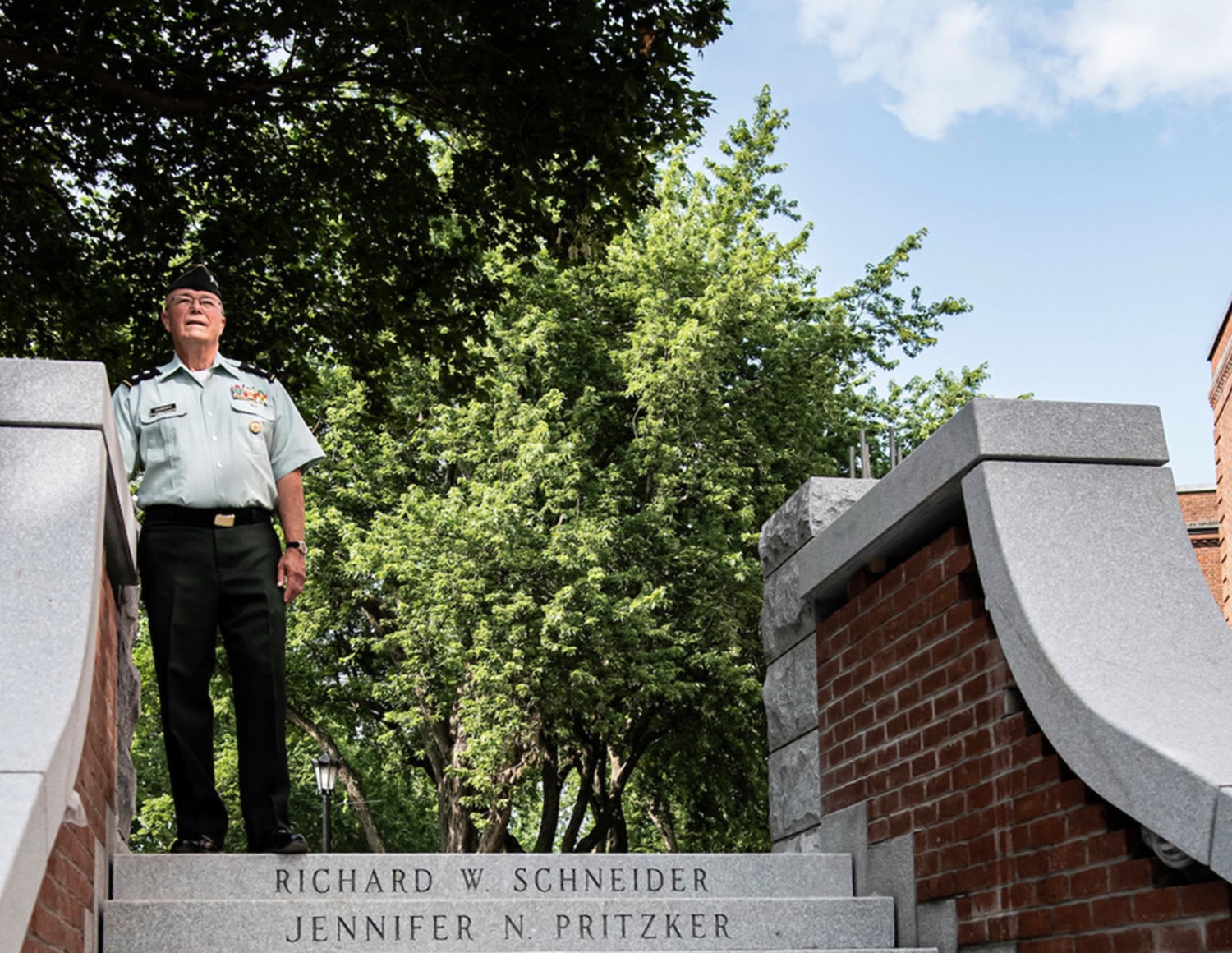 During his 28-year Norwich University presidency, Richard W. Schneider often echoed university founder Capt. Alden Partridge’s credo that students should emerge from their studies as citizen-soldiers — people who can serve and advance the country and lead everywhere, from the boardroom to the battlefield.

This past week, the Pritzker Military Museum & Library in Chicago named Schneider, who became president emeritus after retiring in May 2020, as its 2021 Citizen Soldier Award recipient.

Schneider will receive the award Oct. 21 at the Liberty Gala, hosted at the museum and library. The gala, the nonprofit’s main annual fundraiser, will feature in-person, virtual and video segments.

“I am pleased, humbled and honored by this recognition of my efforts and contributions to bettering society’s understanding of the values of the citizen-soldier and in commissioning thousands of future officers to serve our nation.”Richard W. Schneider, Norwich University president emeritus

In a statement, the Pritzker Military Museum & Library said the Citizen Soldier Award honors someone who exemplified the citizen-soldier ideal even before Partridge did — George Washington.

Washington, the museum and library said, led the nation in war (as the Continental Army’s general) and peace (as president), to better the common good. Schneider, the museum and library added, has personified these qualities through military service (30 years serving in the U.S. Coast Guard and U.S. Coast Guard Reserve) and myriad homefront achievements.

Schneider promoted service at Norwich University partly by overseeing a 60% increase in the Corps of Cadets (which went from 941 members to more than 1,500) and establishing the Center for Civic Engagement, which lets students volunteer to help the elderly, at-risk youth, homeless, hungry, differently abled and economically disadvantaged.

Schneider advanced scholarship partly by expanding majors; when he retired, Norwich University had 39 undergraduate majors, including six degree-completion programs offered online. He also established the College of Graduate and Continuing Studies, which has more than 1,600 online students enrolled in 19 programs including master’s and bachelor’s degrees and professional certificates.

Schneider established Norwich University’s Honors Program and interdisciplinary research centers in peace and war; global resilience and security; and cybersecurity and digital forensics. He built a cybersecurity program that became a national leader and founded the Norwich University Applied Research Institutes, which is funded partly through the Defense and Homeland Security departments and was federally chartered in 2002 under legislation sponsored by Sen. Patrick Leahy, D-Vt.

By overseeing five fundraising campaigns that amassed $272 million, Schneider enabled the building or renovation of 97% of Norwich University’s academic space.

“Dr. Schneider led Norwich University honorably and furthered the development of the citizen-soldier,” Susan Rifkin, the Pritzker Military Museum & Library’s chief operating officer of philanthropic activities, said in the statement. “His tenure and dedication to sacrifice and service, both at this higher education institution, which is the birthplace of the Reserve Officers’ Training Corps (ROTC), and as a member of the military community, showcases his embodiment of the citizen soldier ideals — duty, sacrifice, service before self, courage and patriotism. We are proud to honor his legacy and achievements.”

Pritzker said, “In advancing the promises of the next generation of the citizen-soldier, Dr. Schneider has stood with us as a dedicated partner. His commitment to the principles of sacrifice and service, both in himself as well as in the next generation, showcases why he truly deserves the Citizen Soldier Award.”

Schneider graduated from the U.S. Coast Guard Academy in 1968 and served eight years on active duty, including a tour in Vietnam, and retired after an additional 22 years of service as a rear admiral and the Coast Guard’s senior reservist. His military awards include Coast Guard’s Distinguished Service, Meritorious Service and Commendation medals, the Navy Commendation Medal and numerous campaign decorations.

“Through the years, my work at Norwich University has aligned with the ideals and mission of the Pritzker Military Museum & Library,” Schneider said in the statement. “I am pleased, humbled and honored by this recognition of my efforts and contributions to bettering society’s understanding of the values of the citizen-soldier and in commissioning thousands of future officers to serve our nation.”

SEE: Video of the award from the Pritzker Military Museum & LIbrary