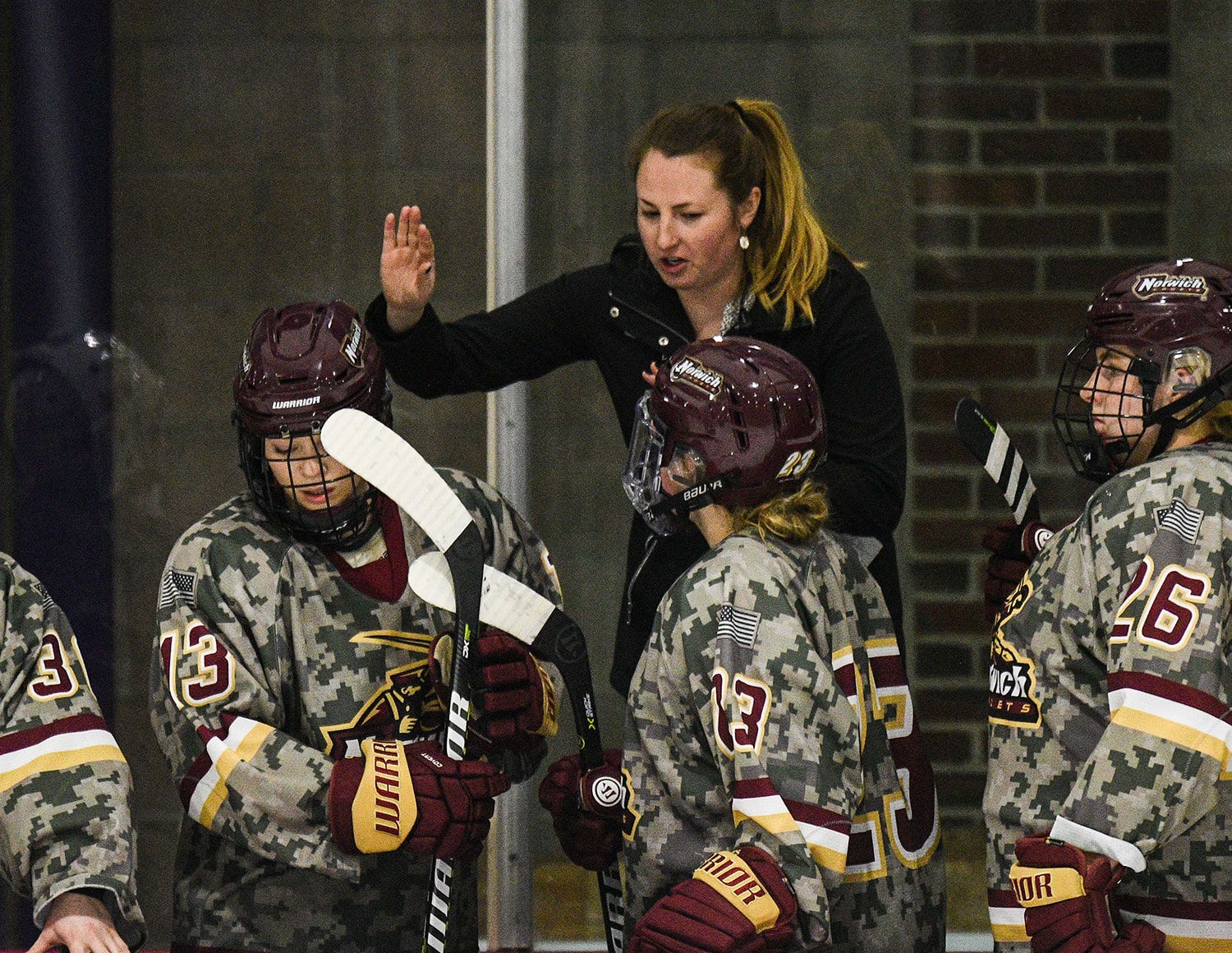 Fitzpatrick has spent 11 of the last 13 years in Northfield, playing women’s ice hockey and lacrosse from 2008 to 2012 and serving as an admissions counselor for one year after graduating in May 2012.

“I have learned so much in the years since knowing you as a teammate to now coaching together and cannot thank you enough for pushing me to keep growing as a person and coach alongside you the last two years.”Mollie FItzpatrick, departing Norwich University assistant women’s ice hockey coach

“Words cannot express my gratitude for everything Norwich has blessed me with throughout the last 13 years,” Fitzpatrick said. “Norwich gave me the opportunity to expect challenges and achieve distinction to grow into the person I am today.

“I want to thank Coach Mark Bolding for giving me a shot to wear the maroon and gold all those years ago, to my teammates who gave me the best memories I could ever dream of, the staff and faculty for always being present and supportive and to the Norwich community for letting me know what ‘Norwich Forever’ means,” she added.

Fitzpatrick also thanked Norwich Athletic Director Tony Mariano for his dedication to the athletic staff, students and Norwich community, Bolding for the chance to coach and current coach Sophie) Leclerc ’10 for her guidance.

“I have learned so much in the years since knowing you as a teammate to now coaching together and cannot thank you enough for pushing me to keep growing as a person and coach alongside you the last two years,” she said. “I am excited to take all that that Norwich has given me to Boston University and seeing what this next chapter has in store.”

Fitzpatrick had an integral role in recruiting and coaching Amanda Conway ’21, one of the most decorated players in NCAA Division III women's hockey history. Conway received Norwich’s second Laura Hurd Award, given to the Division III national player of the year, and was the program’s first three-time All-American.

Conway finished her Cadets career third all-time on the NCAA goals list and tied for fourth in points.

Fitzpatrick, a Falmouth, Maine, native, played 70 career women’s ice hockey games at Norwich, scoring six goals and 13 assists for 19 points as a defenseman and forward. In her senior season, she established career highs with four goals and five assists for nine points in 22 games played.

Fitzpatrick recruited three American Collegiate Hockey Association All-Americans during her time at Norwich and, in 2019-20, coached the 12th-ranked penalty kill in NCAA Division III. The Cadets led the country with eight shorthanded goals, nearly eclipsing the number of goals they surrendered while down a player.

Fitzpatrick also spent a year at Endicott College and the University of New England as an assistant coach. She is first female inductee into the sports Hall of Fame for her high school, Cheverus High School.

Fitzpatrick earned her master’s degree in organizational leadership from Norwich University in 2017.

Boston University’s women’s ice hockey team launched in 2005-06 and has made six NCAA Tournament appearances since. The Terriers have won five Hockey East titles, the latest in 2015.