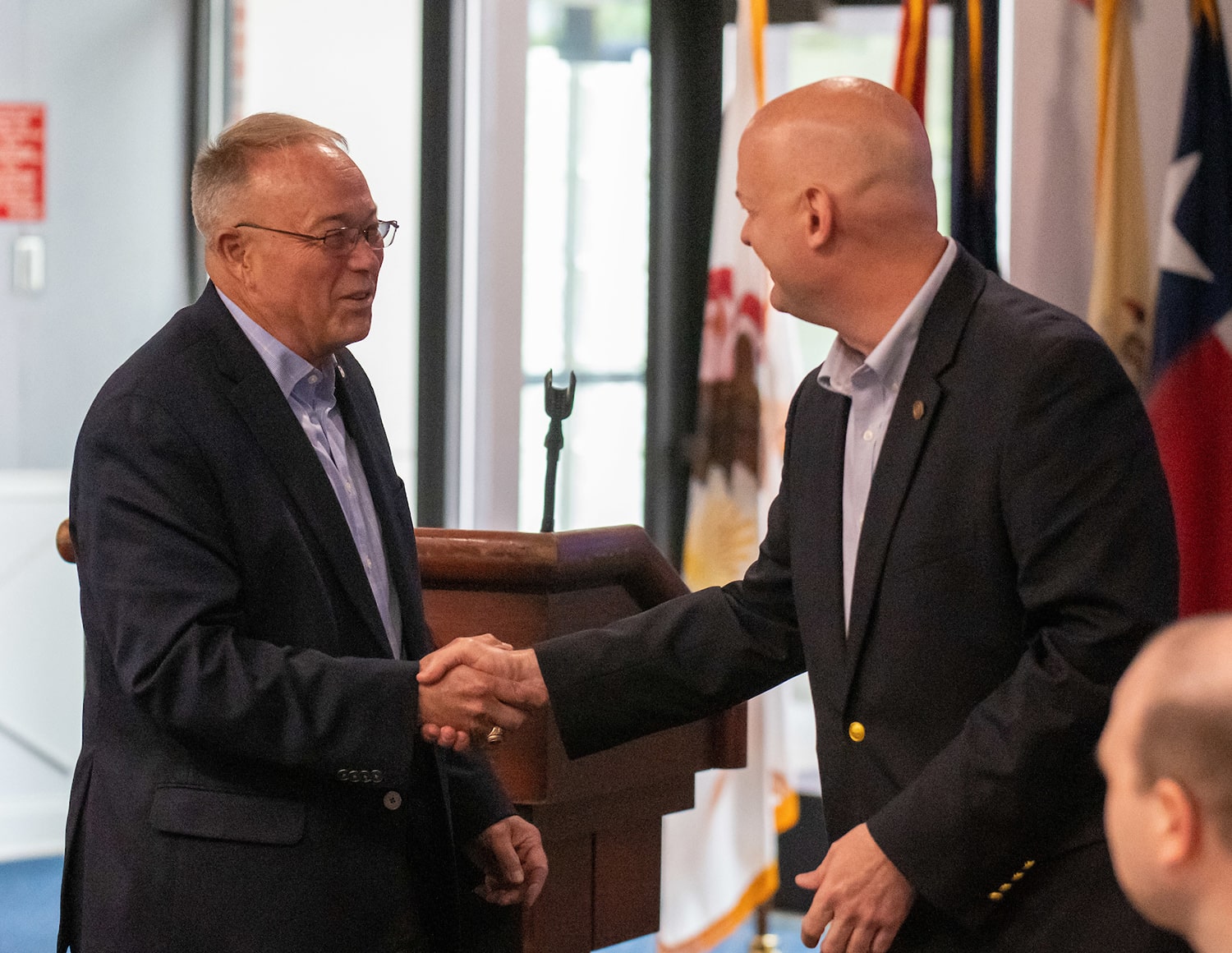 Current president says plan, conceived and funded by Class of 1968, will help students who might forgo college

In his 28-year Norwich University presidency, Richard W. Schneider often hailed the value of service to others and country, an example he set as a U.S. Coast Guard rear admiral.

Now, a year after Schneider retired from the university and became president emeritus, 17 members of the Class of 1968 have created a new scholarship in his name and honor.

The Rear Adm. Richard Schneider Coast Guard Scholarship, announced June 11 at an alumni luncheon at the All Hands Club at the U.S. Coast Guard’s base in Boston, will go to one or more members of Norwich’s sophomore, junior or senior class who are striving for a Coast Guard career, having joined the Coast Guard Reserve or interning at a Coast Guard facility. Besides showing steps toward joining the Coast Guard, students receiving the new scholarship must also be in good academic standing and demonstrate financial need.

“We anticipate that the scholarship will continue to grow as additional members of the Class of ’68 and others choose to contribute to it.”Heather Socha M’20, Norwich University class giving director

Norwich University Associate Vice President of Alumni and Family Relations Diane Scolaro said the Class of 1968 members raised the scholarship’s money unassisted. It was a second show of appreciation for Schneider by the 1968 class. In 2019, when it entered Norwich’s Old Guard, 50 years after graduation, the 1968 Class made Schneider, who graduated from the Coast Guard Academy in 1968, an honorary member.

At the Boston gathering, Norwich University Class Giving Director Heather Socha M’20 said the 1968 Class started the scholarship, hoping to see Norwich students commission into the Coast Guard as officers as they do for other armed forces branches.

“We anticipate that the scholarship will continue to grow as additional members of the Class of ’68 and others choose to contribute to it,” Socha said. “Thank you to all of the ‘enablers’ who are here today, and to those who were unable to attend.”

Norwich’s current president, Dr. Mark Anarumo, said the new scholarship will help assuage cost concerns for students and families, a near-universal worry. The Education Department in 2018 reported, citing a National Center for Education Statistics poll, that 67% of respondents said that cost was very important when choosing a college and 29% said it was somewhat important.

Anarumo said the scholarship will likely enable a college education for students who might otherwise take on thousands of dollars in debt or not attend at all.

“To ensure that an education at Norwich University is affordable and attainable for students, the number one priority for the university is scholarships. Scholarships help us attract — and retain — deserving students,” Anarumo said. “And the support that students receive from the Norwich community instills a greater sense of belonging — and motivation — to make it through the challenges of their Norwich experience.”

On Friday, reflecting on the luncheon, Schneider said he was moved and honored by the scholarship and the 1968 Class’ effort.

“It was nice enough to become an honorary (Norwich Class of 1968) classmate, but then to have them create a Coast Guard scholarship in my name was unbelievable and so generous of them,” Schneider said. “But as much as I am honored, I am more thrilled for Norwich and for the future students who could get the financial support to become Coast Guard officers. … This will transcend long after me.”