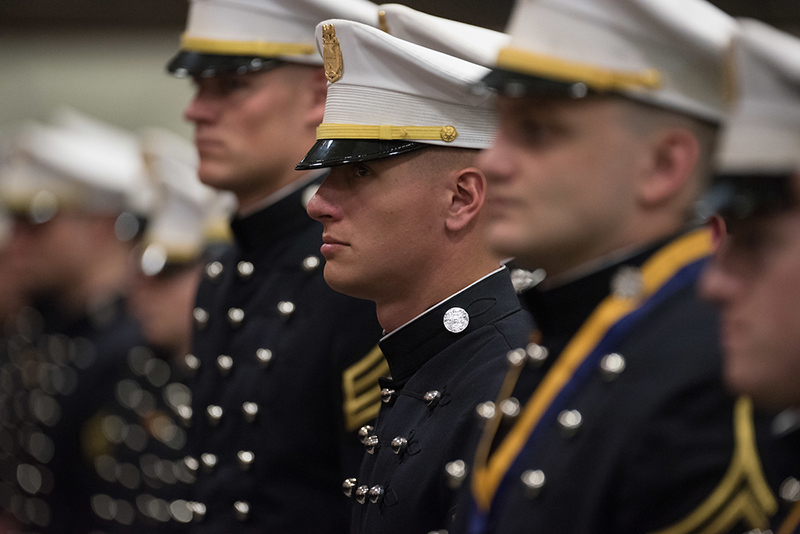 Norwich University celebrated Commencement today, sharing its affection, pride, and faith in the Class of 2016.

Affection for the 469 young men and women it was privileged to serve and know these past four years. Pride in their individual character, hard work, and many accomplishments.

Faith that they will apply what they learned at Norwich — about themselves, about leadership, about their chosen field, about each other — to solve some of the many challenges facing the world today.

“We can’t wait for you to get out there and do amazing things,” Norwich University President Richard W. Schneider told the 296 cadets and 173 civilian students about to receive diplomas in 1 master’s and 32 bachelor programs.

Former U.S. Army Chief of Staff Gen. Raymond Odierno delivered the Commencement address before an audience of 4,000 at Shapiro Field House this afternoon.

He urged members of the Class of 2016 to blaze their own path and to serve the nation and others. “Give back. Give to others. Make a difference in other people’s lives,” he said. “That will be your legacy as a graduate.”

After the last diploma was handed out, a sea of Norwich cadets and black-robed civilian students hurled their white caps or pumped their fists skyward.

Other smaller ceremonies took place throughout the day too, starting with the Nurses Pinning ceremony at 10 a.m. in White Chapel. Speaking to a group of senior nursing graduates, NU School of Nursing Director Paulette Thabault told them, “We’re so proud of you.”

“We hear over and over how well prepared our [nursing] students are,” College of Professional Schools Dean Aron Temkin told them. “You guys are ready.”

Graduating nurse Samantha Nelson gave the school's class address, evoking knowing laughter as she recalled the thrill of wearing scrubs for the first time, the anxiety-inducing wait for exam results, and countless other milestones.

“We supported each other,” she said. “We made it together.”

Across campus, faculty at NU’s School of Architecture + Art held a senior show and awards ceremony for its graduating seniors and master's students. School director Cara Armstrong kicked off the celebration, telling graduates, “I know I’m going to get choked up, so I’m going to keep it brief.”

Associate professor of Architecture Danny Sagan told the assembly that the world needs architects, noting a historic shift in the past five years: For the first time in human history, the majority of the global population now lives in cities.

Architects are uniquely positioned to solve problems connected to our built environment, he said. “If there are people who are trained to make the quality of life better, it’s architects.”

Elsewhere, at a reception for the NU College of Science and Mathematics, former U.S. Army Chief of Staff and Norwich Board of Trustees Chairman Gen. Gordon R. Sullivan '59 chatted with newly appointed Chairman Alan Deforest ’75. They stood in Weintz Courtyard at the granite foot of Norwich founder Alden Partridge, surrounded by faculty, students, and their families.

In Dole Auditorium, engineering majors were inducted into the Order of the Engineers and received stainless steel pinky rings, a symbolic reminder that lives rest on the integrity and safety of their work.

Beyond rings and diplomas and hopes and dreams and future plans, Norwich’s graduates carried something else today. They carried the things they learned here about themselves and their lives going forward.

“Norwich taught me to be a confident, independent woman,” says Shaili Patel, a civilian student who double majored in architecture and history. “It showed me that I have the capabilities to be a leader, as well as the capacity to grow and learn as a person.” Patel will begin a master’s program in architecture at Norwich this fall and will later commission as an officer into the U.S. Navy.

Samantha Thornton majored in criminal justice and served as first lieutenant in the Corps of Cadets. The former homecoming queen from Tampa, Fla., says Norwich helped her discover a remarkable inner toughness and her professional passion for helping victims of sexual assault.

“I think I learned here that you can accomplish anything—really, honestly—anything put before you,” she says. “It's a mindset. Whatever anyone throws at you, you can most certainly do.”

Olivia DeSpirito, a biology major from East Brunswick, Rhode Island, joined Norwich’s he Corps of Cadets, served on the university’s Honor Committee and traveled to Macedonia.

“What I really learned about myself here at Norwich is that you have in yourself the power to do great things—provided you don't give into pressure around you,” she said.

She starts graduate school this fall, studying forensic science to fulfill a childhood dream of becoming a forensic pathologist.

Kenneth Sikora, a commuter student from Calais, Vermont, majored in biochemistry, led the Norwich Fencing Club, and translated medieval Chinese poetry while completing the university's rigorous academic Honors Program. As an undergraduate, he investigated the differential expression of genes that influence cancers among countless other research projects.

Sikora, who plans to apply to med school, says one thing he learned at Norwich was to take a deep breath. It’s natural to be nervous in front of a crowd. The feeling will pass, often in just a minute. Then you can tell the world what you know.